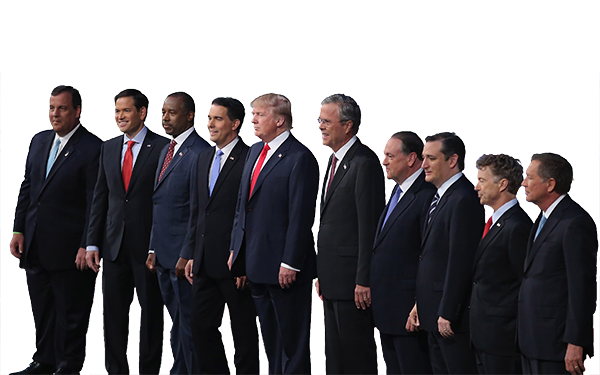 Marco Rubio, Jeb Bush, Chris Christie and other Republican presidential contenders discussed education proposals they said could help lift people out of poverty, including school choice, devolving control of schools to state and local governments, and limiting the influence of teachers unions.

(Check out The Seventy Four’s interviews with Bush, Christie and John Kasich from our Education Summit in New Hampshire in August, and our interviews with Carson and Marco Rubio from November.)

Bush emphasized that states, not the federal government, should control education.

Florida, for example, has made gains in early-age literacy by providing four-year-olds with half-day preschool programs. The state should have greater flexibility to use federal dollars, like those from the Head Start program, as it sees fit.

The current system, with lots of federal oversight, yields little more than a bureaucratic mess that doesn’t actually help kids, he said. Eighty percent of bureaucrats in the state education office in Florida deal with 10 percent of education dollars — those from the federal government, Bush said.

The current funding system — “based on little butts in a seat” — also isn’t helping children by limiting them to progress through their educations based on their age. Instead, he said, a competency-based system should be created to allow children to move through material at whatever rate they can master it.

“We shouldn’t just fund the beast. We ought to be funding people that have the strength and character” to change the existing system, Bush added.

Christie made the most pointed dig of the day — one he has voiced before — at teachers unions.

“The single most destructive force for public education in this country is the teachers union,” he said.

He didn’t spare any criticism of Democratic frontrunner Hillary Clinton, either, noting she was endorsed by both the American Federation of Teachers and National Education Association ahead of the primaries.

He also suggested two policies unions traditionally don’t back: teacher pay based on performance, and a longer school day and school year.

Carson, for his part, reiterated his previous comments that home-schooling is best. He also said the country should focus more on vocational education, STEM programming and the use of technology in the classroom. It’s essential that the country not leave any child behind so that we can compete economically with China and India, vastly more populous countries, Carson said.

Later in the day, Ohio Gov. John Kasich and Florida Sen. Marco Rubio had a separate panel that touched on school choice and, again, the importance of vocational and technical education. Immigration protesters interrupted Rubio several times, charging that he did not represent Hispanics and wanted to deport families.

Rubio reiterated ideas he’s previously proposed to offer a federal tax credit to businesses that donate to nonprofit organizations that assist low-income families with tuition for private schools. It’s immoral that only poor parents don’t have a choice of where to send their children, he said.

He also urged a greater emphasis on vocational and technical training. Students who attend high schools that don’t offer it should be able to use Pell Grants to study at a community college while they’re still in high school, he said.

He talked about the importance of on early childhood education — young children who grow up in poverty often don’t have “the kind of development of in their brains that they need” to be successful when they get to school, he said.

The event was sponsored by the Jack Kemp Foundation. Kemp was a professional football player, representative from New York, housing secretary and 1996 Republican vice presidential nominee. He called himself a “bleeding heart conservative” and supported affirmative action and rights for undocumented immigrants alongside more traditional conservative economic positions. The foundation named for him has aimed to promote that legacy since his death in 2009.