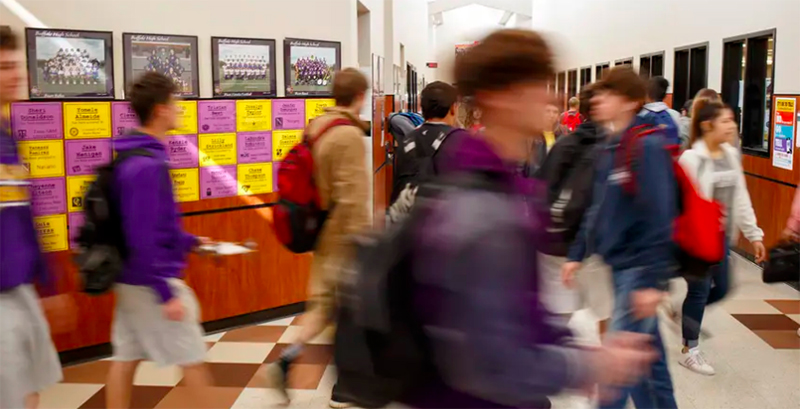 Texas lawmakers are seeking to limit how and what public school students are taught about race. (Michael Stravato for The Texas Tribune)

Mirroring moves by other red-state legislatures across the country, Texas Republicans are attempting to reach into classrooms and limit what public school students are taught about the nation’s historical subjugation of people of color.

Two bills moving through the Texas Legislature would bar the teaching of critical race theory, an academic discipline that views race as a social construct and examines how racism has shaped legal and social systems.

“Texans reject critical race theory and other so-called ‘woke’ philosophies that maintain that one race or sex is inherently superior to another race or sex or that any individual, by virtue of his or her race or sex, is inherently racist, sexist or oppressive,” Lt. Gov. Dan Patrick said last week in a statement endorsing the legislation. “These divisive concepts have been inserted into curriculums around the state, but they have no place in Texas schools.”

But educators and social justice experts see the efforts as an attack on the state’s civic education curriculum at a time when students should be learning more, not less, about civics, social justice and history.

“There is more attention being given than ever before to the societal problem [of civic education] and how to fix it, which is why Texas, like every other state in the union right now, has so many civic education bills being put forth,” said Wendy May-Dreyer, who leads the Texas Civic Education Coalition. “The problem is we have a small faction who’s trying to quash that effort, that progress forward, and if we miss our opportunity, the Legislature doesn’t meet for another two years, and we likely have just missed the boat completely.”

Last week, the Senate passed Senate Bill 2202, authored by Sen. Brandon Creighton, R-Conroe, which bans teaching that “one race or sex is inherently superior to another race or sex; (2) an individual, by virtue of his or her race or sex, is inherently racist, sexist, or oppressive, whether consciously or unconsciously.” Many Texas Republicans see critical race theory as a way to give students implicit or unconscious bias training, which Creighton’s bill seeks to prohibit. It passed the upper chamber 18-13, all its supporters white Republicans.

Teachers’ organizations and education advocacy groups alike have mobilized to oppose both bills, and groups with no official stance toward critical race theory, like the Texas Civic Education Coalition, oppose the bills because they limit civics engagement and learning for students.

Beyond discouraging teachers from discussing current events and critical race theory, SB 2202 and HB 3979 also prohibit students from receiving class credit for participating in organizations that promote civic engagement and interest, according to the Texas chapter of the American Federation of Teachers. And the bills would ban school districts from receiving private funding for opportunities like social studies curriculum development, course materials and teacher training, as well. That provision means individual schools won’t be able to accept donations or materials for teaching the 1619 Project curriculum, a program developed by The New York Times Magazine that centers on critical race theory.

Many of the bill’s proponents have focused on playing to the popularity of banning critical race theory from Texas schools, May-Dreyer said, but few have mentioned the other provisions to diminish efforts to expand the state’s civic education curriculum.

“These bills try to ignore or downplay the racism, sexism and other injustices in our state’s and nation’s history, but students must be encouraged to fully explore and understand those injustices if Texas is to provide an equitable future for a rapidly diversifying population,” said Clay Robison, a public affairs specialist for TSTA.

In a statement to The Texas Tribune, Creighton defended his bill, arguing that Texas schools should emphasize “traditional history, focusing on the ideas that make our country great and the story of how our country has risen to meet those ideals.”

Across the country, many Republican-controlled state legislatures are considering similar bills to prohibit the teaching of critical race theory. Last week, Idaho became the first state to officially bar critical race theory from public schools and colleges after the governor signed the legislation, which the bills proposed in Texas closely mirror.

Also last week, the Louisiana House Education Committee discussed a similar bill authored by state Rep. Ray Garofalo. He withdrew the legislation after his colleagues criticized him for commenting on “the good” of slavery, according to The Washington Post.

“Not talking about racism and other forms of injustice won’t make them go away,” said Jonathan Feinstein, the Texas state director of The Education Trust. “This unnecessary bill — like others introduced across the country — prevents schools from proactively addressing harmful acts of discrimination, ties the hands of teachers rather than supporting them, and seeks to hold students back from grappling with and helping to solve real challenges facing our society.”

With just a few weeks left in this session, the battle over this legislation may go down to the wire. Rep. Harold Dutton, a Black Democrat from Houston who chairs the House Public Education Committee, pulled Toth’s HB 3979 back to the committee on Monday morning. Later Monday, members voted the bill out of committee for a second time with Dutton’s support. Dutton’s office did not respond to a request for comment on why he voted for the bill. Experts said they expect the bill to reach the House floor at some point in the next three weeks.

“The prohibitions in the bill are broad and may be interpreted in ways that limit the learning, diversity and inclusion efforts already underway in schools across Texas,” said Zeph Capo, the president of Texas AFT. “The last thing we need is more overly broad ‘education’ legislation that will trap our state and school districts in expensive, needless litigation. Let teachers teach.”

Disclosure: Texas AFT, Texas State Teachers Association and New York Times have been financial supporters of The Texas Tribune, a nonprofit, nonpartisan news organization that is funded in part by donations from members, foundations and corporate sponsors. Financial supporters play no role in the Tribune’s journalism. Find a complete list of them here.