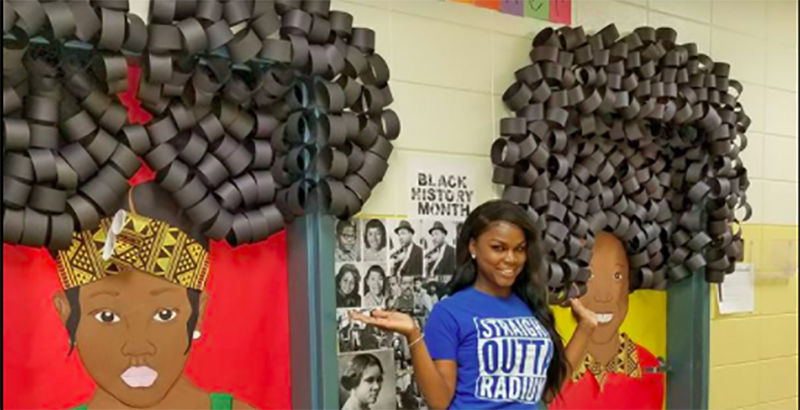 Nakimer Daniels called the schoolroom doors she decorated for Black History Month “Be a Dreamer.” But she never dreamed they’d catapult her to fame.

DO IT FOR THE CULTURE.Inspired by a post I saw, I decided to take the black history challenge. I am not just an art…

In a February 13 Facebook post titled “DO IT FOR THE CULTURE,” the art teacher at Radium Springs Elementary School in Albany, Georgia, who goes by the nickname Kymm, shared photos and a video of her creation. The two doors, which feature an African-American boy and girl resplendent in colorful clothing and big hair, flank a panel with dozens of photos of figures from black history and present-day prominence, including Oprah, the Obamas, the Rev. Martin Luther King Jr., Stevie Wonder, and Jackie Robinson.

Two days later, Daniels got a shock — her post hit the big time, with nearly 66,000 shares and 4,000 comments — and suddenly, the 2015 fine arts graduate of Georgia’s Columbus State University was on the air in an interview with local TV station WALB News 10.

“The kids love it. They were in awe when I got finished with it,” Daniels told the station. “They were like, ‘Miss Daniels, who are they?’ I was like, ‘They are you, or you, they could be anybody.’ It’s something that relates to them, and they just love it.”

Art Teacher Kymm Daniels shared this beautiful art 😍😍😍 I wish I saw representation like this when I was in school !!! #BlackHistoryMonth2018 (found on fb) pic.twitter.com/KJ89KGmBmP

Daniels got the idea from projects other art teachers had posted on Facebook as part of the Black History Challenge. She enhanced the everykid portraits in her mixed-media masterpiece with textiles: An African-patterned hair band around the girl’s head is made of the same cloth as the boy’s shirt collar. The bodacious hairstyles are fashioned from curled black streamers.

“I got a lot of good response from people all over the world. They want to do it. Not just art teachers but teachers in general,” Daniels told The Telegraph. “I think it’s a great way to inspire the children.”

Daniels’s pupils weren’t the only ones sparked by her work of art. After challenging her colleagues — “Let’s show them how art teachers do it” — others have stepped up to the plate, including Chicago’s Kay L Bee, who borrowed Daniels’s signature technique for representing hair when she made a striking portrait of Michelle Obama.

In light of the doors that her doors project have opened, Daniels vows that the creativity and inspiration won’t end when Black History Month is over.