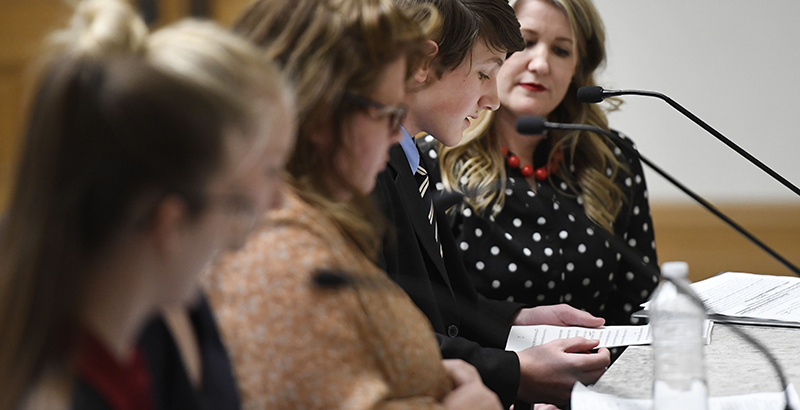 Clark Wilson, second from right, a 9th-grader in the Douglas County School District, reads his statement in favor of a sex education bill during a public hearing at the Colorado State Capitol in January. The bill, which is awaiting the governor’s signature, would block Colorado's public schools from teaching abstinence-only sex education. (Andy Cross/MediaNews Group/The Denver Post via Getty Images)

As the #MeToo movement rolls on, parents, students, educators and lawmakers are paying special attention to sex education and the role it can play in preventing sexual violence. A new analysis shows that state legislatures, led by students and female lawmakers, are introducing and passing laws to add consent and healthy relationships to sex education classes.

What students learn in school about sex and intimate relationships varies widely from state to state and even within districts. In a report released Wednesday, the left-leaning Center for American Progress takes stock of state policies on consent and healthy relationships in sex education. Researchers found that six states have added consent to their sex education frameworks in the past year, and some are making policies more inclusive of LGBTQ students. Additionally, a handful of states have added information about sharing explicit content and messages online, which also includes questions of consent.

Student activists and female legislators, many of them newly elected, have led much of the progress in modernizing sex education, the researchers found.

“The momentum that’s building is really important and really positive,” said Abby Quirk, research associate for K-12 education at the Center for American Progress and an author of the report.

Here are five takeaways from the new report:

Six states added language about consent or healthy relationships to their sex education standards in the past year. Two of those states — Maryland and Rhode Island — already mandate sex ed and now require that it include some discussion of consent. The others — Colorado, Illinois, Missouri and Oklahoma — do not mandate sex education in every school but now require that it include consent if it is taught.

In five other states — Florida, Georgia, Kentucky, Mississippi and Washington — bills related to consent education were introduced but not passed, according to the report.

Overall, 21 states and Washington, D.C., now mention consent or healthy relationships in their sex education standards. However, not all of those require sex education to be taught in all schools, and only nine of them require content to be medically accurate if it is taught.

California and New Jersey, which already mandate comprehensive sex education, recently added a requirement that it include information about the “legal and emotional consequences” of sharing explicit messages and images online and by text, according to the report.

A 2018 survey found that more than 14 percent of 12- to 17-year-olds had sent a sexually explicit message and 12 percent had forwarded an explicit message without the consent of the original sender, which is illegal in 33 states.

Missouri does not require sex education but in 2018 passed a law that requires consent and responsible online behavior to be included if it is taught. Similarly, Wyoming requires discussion of explicit communication as part of “digital citizenship” even though sex education is not mandated.

Sex education is becoming more inclusive of LGBTQ students, but more work is needed, the authors of the report conclude. Nine states have LGBTQ-inclusive sex education policies, and Alabama and Arizona recently have taken steps to remove standards that restrict how teachers can talk about non-heterosexual relationships. Additionally, the Massachusetts legislature is considering a measure that would add discussion of consent to sex education as well as make the standards LGBTQ-inclusive.

The stakes are high. The report points to a 2017 Centers for Disease Control and Prevention report showing that LGBTQ students are more likely to engage in risky behaviors, such as not using a condom. Additionally, the CDC report shows that transgender teens are at a higher risk for sexual violence than their cisgender peers.

Rethinking Sex Ed for the #MeToo Moment: A ‘Hugely Significant’ Study Shows That Strengthening Education on Relationships & Consent Can Change the Culture

4 Young people are leading the charge for change.

“Young people have bolstered most of the recent bills” on this issue, the authors write. For example, Maryland student Maeve Sanford-Kelly worked with her mom, state lawmaker Ariana Kelly, to get her state to require discussion of consent in sex education classes. Students in Colorado, Pennsylvania and Washington have also testified in favor of more progressive sex education policies. Earlier this year, students in Idaho spoke out against a bill that would have required parents to opt their children in to sex education classes; that bill ultimately failed.

At 12, appalled by the crimes of Bill Cosby and Brock Turner, and how their victims were treated, Maeve Sanford-Kelly considered what she could do to prevent sexual assault and landed on the concept of sexual consent education. https://t.co/wlH4SPPRfS https://t.co/EFUj5ZR7nh

“A lot of these high school students are not old enough to vote, so to have a voice in the policy in another way through this advocacy, through testifying, through writing op-eds, through sharing their experiences is really powerful and something we wanted to highlight,” Quirk told The 74.

5 Female legislators are particularly active on this issue.

Women represent less than 30 percent of state legislators overall, but they have driven much of the change surrounding sex education. A third of all bills currently moving through statehouses were introduced by women who began their legislative tenures in 2019, the authors note. Additionally, women tend to support these bills more often than men — more than half of co-sponsors of the laws passed in Maryland and Illinois in the past year were female, even though women make up less than 40 percent of the legislature in both states.

“These numbers make it clear that [women] have significant interest in and engagement with this topic,” the authors write.

The report comes on the heels of a new study showing that unhealthy intimate relationships can have deadly consequences for young people. Seven percent of youth homicides, representing 150 deaths, between 2003 and 2016 were committed by a current or former romantic partner, according to a study published in April.

“While the dynamics of these relationships may be quite different than among adults, this is a public health issue we need to take seriously,” Avanti Adhia, who led the study, told The New York Times.