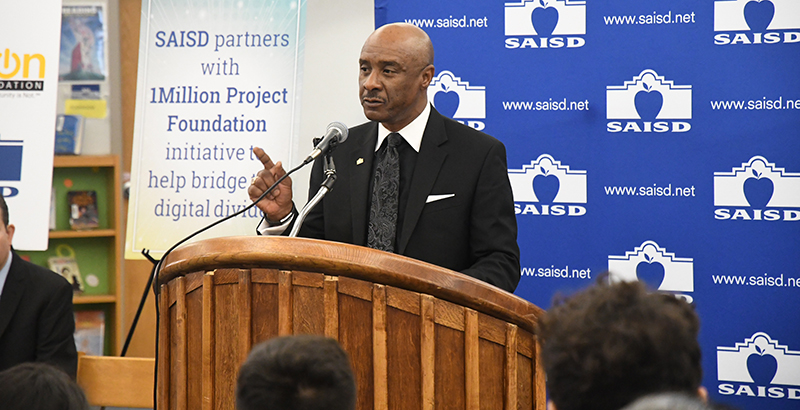 For the 48,000 students in San Antonio Independent School District, Ken Thompson is this year’s Most Valuable Player — even if many don’t yet know his name.

As the district’s Chief Information Technology Officer, Thompson usually plays a supporting role, enhancing the classroom experience with internet connectivity and the devices that go with that. Teachers filed the occasional request for support, and parents rarely called.

This year, on the first day of virtual school, Thompson and his help desk team fielded 1,400 calls, far more than the 100 calls on a typical first day of classes.

Since the pandemic hit San Antonio schools in March, Thompson has been at the center of the action. With a one-week pivot to distance learning in the spring, Thompson’s department became the lifeline between teachers and students.

“This is a paradigm shift,” Thompson said in April. “But we have stepped up.”

Thompson’s team will remain in that key role for the foreseeable future. Most school districts in San Antonio remained entirely virtual through Labor Day, with only a small percentage of students coming back for in-person classes within the first nine-week grading period, which ends in October.

Superintendent Pedro Martinez said he doesn’t foresee a return to 100 percent in-person learning until after the new year, and even then it’s likely that families with heightened health risks will opt to stay home.

Thompson’s technology will be their primary connection to school.

He refers to the students, affectionately, as “the babies,” a common term of endearment used by staff in SAISD. It reminds them of the responsibility they have to support the students and their families, to be dependable.

His main priority for the first week had been “contacting the babies, getting them engaged,” he said. That was never the realm of the IT department before the pandemic, he explained, but he felt the gravity of it.

On the weekend before school started, Thompson manned the help desk along with his team, which grew from four to 15 during the spring shutdown and worked from 7 a.m. to 7 p.m.

On Aug. 21, parents and teachers celebrated an end to the first week of distance learning in San Antonio.

Not so much the help desk.

The team would work through the weekend and the next week, though Thompson felt confident enough to shorten the 12-hour days. Daily help desk calls had gone from that first-day-of-school high of 1,400 calls to a “manageable” 550 by Thursday of that week.

Working with Martinez and the rest of the district’s executive cabinet, Thompson set up metrics to monitor various cracks students might slip through, and multiple avenues to find them.

Among the myriad things that could go wrong in an all-remote learning situation, Thompson was pleased that in the first week, most calls were not actually about technical things that had gone wrong. “Ninety-five percent of our calls have been for usernames, passwords, where to put them, and how to connect to Wi-Fi,” he said. “That shows the level of support we need to provide our parents.”

Thompson moved to San Antonio from Baltimore in October 2019, so his time answering parent phone calls on the help desk this August has had particular significance.

“This is my first real exposure to the parents of San Antonio,” he said. He’s been impressed with their patience and willingness to take on what, for many, is a steep learning experience.

Many of the parents in SAISD work in the service industry. Many are blue-collar. Their jobs don’t require them to be online, so this foray into distance learning is new in every way. Students who live with grandparents also require extra support.

Thompson is exactly the kind of person a parent would want helping them while they juggle frustrating technology issues. Colleagues describe his energy as “contagious.” His optimism and can-do spirit create a constant buzz in the air around him, but a thread of compassion and gratefulness shows through.

The economics of the district also mean that internet access is not a given, Thompson said. Even families who have broadband access on day one may have to make the tough decision to cancel it on day two, opting instead for groceries.

Every day of missed classes counts, so Thompson is doing what he can to shorten the distance between families and the technology they need to log on to school.

He has extra hotspots ready to deploy for those who lose internet access, he said, and turnaround time is about two days. It would be shorter if the hotspots, many purchased with federal funds, did not need to be meticulously tracked and documented.

To hit that two-day turnaround time, he needs the human element to work too. There are several links in the communication chain between Thompson and families in need. Every teacher, principal, counselor and nonprofit worker has to pass the information along quickly and clearly. It’s no small task.

The district allowed students to keep their Chromebooks and tablets over the summer, so there was no need for a massive redeployment in August. But even that has been subject to miscommunication. In the spring, one principal mistakenly told his students to turn in their devices, which caused significant confusion and frustration for parents.

Unlike the hotspots, Thompson is able to place extra Chromebooks on each campus, he said. Some will inevitably need to be replaced, he explained, but others will be made available for students showing up to enroll throughout the first week.

That’s a wrinkle in the tech plan that Thompson and Martinez anticipated.

Every year, SAISD sees thousands of students enroll during the first week of school, Martinez said. Usually that is a matter of showing up at school, signing some papers and sending the student to class.

“This happens every year, but it’s a little more tricky this year,” Martinez said. Students are likely to miss some days of school while being integrated into the numerous databases and systems that create logins and passwords for the various learning platforms teachers are using.

Knowing that this would likely be the case, and knowing that teachers would need some extra time to connect to their students without the social and emotional boost of in-person interactions, many principals and teachers built in a gradual entry ramp to the online courses they designed using Canvas, the online learning platform chosen by the district. Thompson made sure they had the technology on hand to get started, to minimize the wait for new families.

The process is also dependent on the tech savvy of teachers. Even with professional development, teachers are still learning as much as parents in some cases.

But that slow start belies what teachers have in store, Martinez explained. More than 1 million lesson plans were uploaded to Canvas before school started. “The level of energy is so high.”

As the speed picks up and the district’s technology systems must support as much academic learning as the district does social and emotional connection, Thompson said he and his team will be ready.

As long as there are calls coming in, devices logging on and passwords being reset, Ken Thompson will be there, maintaining the connection between teachers and their “babies.”

Submit a Letter to the Editor
September 9, 2020