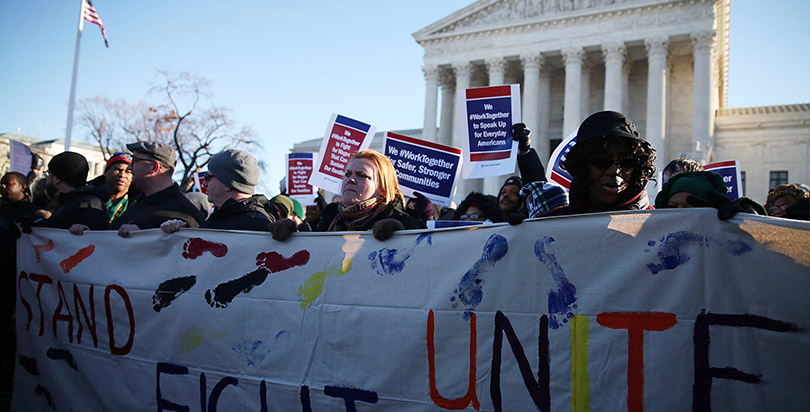 The lawyers who challenged union fees in the high-stakes Friedrichs v. California Teachers Association case have filed a new lawsuit in hopes of achieving a decisive Supreme Court victory — a result denied to them last year when a tie vote left mandatory dues in place.

“The case is really identical in most respects to Friedrichs v. California Teachers Association, a case that the Center for Individual Rights brought before the Supreme Court just a little over a year ago,” Terry Pell, the center’s president, told reporters during a conference call Tuesday. “The legal claims are the same; the litigation strategy is the same. The principal difference is that we are representing new clients.”

(The 74: Teachers Unions at the Supreme Court: 9 Things You Need to Know About the Friedrichs Case)

The case makes the same argument as Friedrichs: that mandatory union dues — or so-called agency fees — violate teachers’ First Amendment right to withhold support from political causes and activities that conflict with their beliefs. About half the states, including California, require union-covered employees to pay at least some fees on the grounds that they benefit from union activities. The other half are right-to-work states, which do not.

Teachers pay the union about $1,000 a year in agency fees. They can opt out of the 30 percent that goes toward expenses unrelated to collective bargaining, or what the suit calls “political and ideological activities.”

But the plaintiffs argue that the union frequently stakes out political positions during collective bargaining, which all teachers are still required to pay for. “One example, when the union negotiates over salary and pension benefits, it’s essentially negotiating with local elected officials over the best use of tax dollars,” Pell said.

The suit also argues that having to send a formal opt-out notice every year is an “unnecessarily burdensome” process that infringes on First Amendment rights.

The Supreme Court heard oral arguments in the Friedrichs case in 2016, just a month before Justice Antonin Scalia died. When the eight remaining justices voted, they deadlocked, 4–4, leaving the current rules intact.

(The 74: Inside the Supreme Court: Scalia, Once Seen as Key Friedrichs Swing Vote, Turns on Teachers Unions)

President Trump’s Supreme Court nominee, Neil Gorsuch, has been described as similar to Scalia. However, Pell said that nothing from Gorsuch’s record indicates how he might rule in this case, if confirmed.

“Justice Scalia is a clear example of someone whose vote you couldn’t take for granted, and we certainly wouldn’t take, if he’s confirmed, Justice Gorsuch’s vote for granted either,” he said.

CIR filed the new case in the same district court as Friedrichs, with the strategy of getting the case before judges who are familiar with the arguments and will render a decision quickly, so that the case can move on to the next court, Pell said.

If the courts rule in favor of the plaintiffs, teachers will have to opt into, rather than opt out, of union fees.

“So instead of the teachers having to chase the union around to get a refund, the unions would have to approach the teachers to get them to affirmatively agree to pay any portion of the political dues,” Pell said.

Right now, he said, about 10 percent of the union’s teachers opt out of fees unrelated to collective bargaining. “A loss of 10 percent of the members is significant, but it’s not going to change the ability of the California Teachers Association to represent teachers,” he said. The case, he added, is neither pro- nor anti-union.

The union did not respond to a request for comment, but spokeswoman Claudia Briggs told The Orange County Register that the lawsuit could hurt union membership.

“Unions are made up of teachers, firefighters and other working people,” Briggs said. “Whatever happens to us happens to everybody else.”

Pell expects the case to land before the Supreme Court in the fall, with a decision in June 2018.