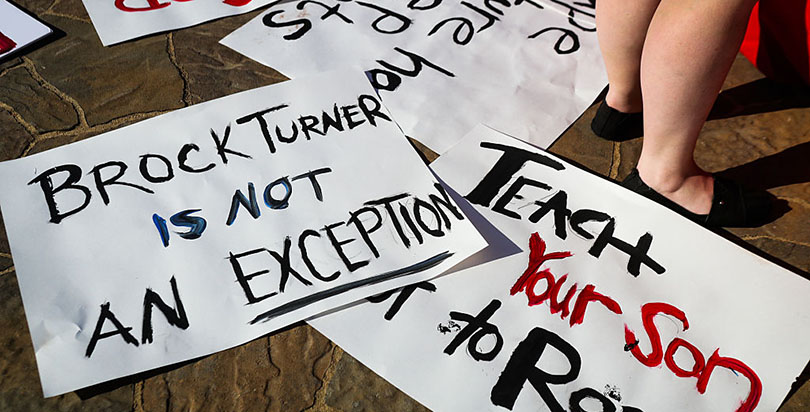 Updated Aug. 9
After telling school officials she was raped in the band room, Rachel Bradshaw-Bean was punished. Instead of receiving protection from leaders at her Texas high school, she was kicked out and shipped off to an alternative school — alongside the boy she said attacked her.
In California, 13-year-old Seth Walsh killed himself after telling classmates he was gay. Walsh faced two years of relentless and escalating harassment after coming out, investigators said, but school officials failed to address the abuse until it was too late. In 2010, he hanged himself.
In both of those cases, the K-12 school districts reached agreements with the U.S. Education Department’s Office for Civil Rights, after federal investigators found that local education officials had flubbed their obligation to protect students from gender-based violence under Title IX, which prohibits sex discrimination in schools. In each case, district leaders promised they’d create new school policies to better protect student safety.
Adele Kimmel is banking on a similar outcome for her client. A Washington, D.C.–based senior attorney at Public Justice, Kimmel has been representing sexual-violence victims for several years, including a young Georgia woman who also faced retaliation for reporting an attack. Inside a Gwinnett County high school’s newsroom, Kimmel said, a male classmate coerced the young woman into performing oral sex. After she reported the incident to school officials, she was suspended for engaging in sexual acts on campus. But first, Kimmel said, educators grilled her client with bone-chilling questions: “What were you wearing?” “Why didn’t you scream louder?”
Gwinnett County Public Schools is currently one of 137 K-12 school districts under investigation by the Office for Civil Rights for 154 Title IX sexual violence complaints, according to a spreadsheet, dated Aug. 2, that the department provided to The 74. The pending investigations — against public districts, private institutions, and charter school networks in 37 states and the District of Columbia  — stretch back as far as December 2010. On the university level, the office currently has 350 investigations pending at 246 postsecondary institutions, according to an Education Department spreadsheet also dated Aug. 2.
Pending investigations at 137 school districts
Click on the points for details about each open case.
Source: U.S. Department of Education
And though Kimmel suspects the investigation against Gwinnett County is nearing a close, she said the outcome is up in the air as Education Secretary Betsy DeVos considers highly contested changes to the way the federal government holds schools accountable for sexual harassment and student assaults. The closely watched debate has converged around sexual violence on college campuses, but it could also have huge ramifications for students in K-12 schools, which, advocates say, have long struggled to protect victims from harm.
“What you see most commonly is that colleges are far ahead of K-12 schools in the development of their sexual-misconduct policies and procedures, their training, and their education of staff and students, making sure that students know who the Title IX coordinator is,” Kimmel said. “My concern is that — with the changes that seem to be coming from the Department of Education’s Office for Civil Rights — K-12 schools are going to fall even further behind in terms of Title IX compliance.”
An overlooked problem
Victims of sexual assault on college campuses found a national platform as the Obama administration placed a clear focus on Title IX enforcement, most notably for articulating the evidentiary standard for findings of wrongdoing in campus sexual-violence cases. While K-12 schools have largely been left out of the building debate, the Office for Civil Rights has seen a surge in Title IX complaints against these schools similar to those targeted at colleges and universities.
Following a series of July listening sessions with victims of sexual violence, students who say they were unfairly punished under Title IX, and education leaders, DeVos is contemplating a philosophical and practical shift at the department’s civil rights division, which the new administration plans to revive as a “neutral, impartial, investigative agency.” In resolving sexual-violence investigations, DeVos said, “a system without due process ultimately serves no one in the end.”
“There are some things that are working. There are many things that are not working well,” DeVos told reporters. “We need to get this right.”
Obama-era Title IX guidance has been a thorn for Republican lawmakers and advocates who have alleged — including in lawsuits — that the former administration stripped due-process rights from students accused of sexual harassment and assault. At the heart of that complaint is a 2011 “Dear Colleague” letter that urged colleges and K-12 schools to better investigate reports of sexual violence, specifying that educators “must use a preponderance of the evidence standard” in campus investigations, rather than a more rigorous “clear and convincing” standard. Advocates for sexual assault victims argue that the “preponderance of the evidence” standard is used to adjudicate civil rights claims. 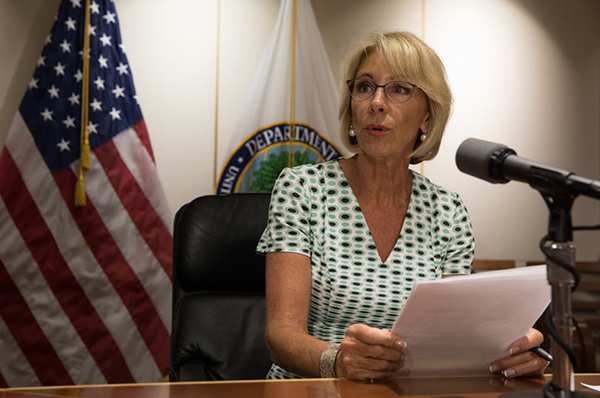 Secretary Betsy DeVos holds a press conference at the Education Department in July after hosting a series of meetings with victims of sexual violence, students who say they were unfairly punished under Title IX, and education leaders.
Photo: Getty Images

Under President Trump, however, advocates for sexual-assault victims are on the defensive. As federal education officials weigh revising Title IX guidance, Kimmel worries that DeVos and Candice Jackson, acting head of OCR, have subscribed to “rape myths.” Her confidence in OCR as an avenue for civil rights relief, she said, has waned.

A day before meeting with stakeholders about the department’s Title IX guidance, Jackson told The New York Times the process for investigating student sexual-violence allegations has not been “fairly balanced between the accused victim and the accused student,” and that some students have been unfairly implicated.
“The accusations — 90 percent of them — fall into the category of ‘we were both drunk, we broke up, and six months later I found myself under a Title IX investigation because she just decided that our last sleeping together was not quite right,” Jackson said, later issuing an apology and calling the statements “flippant.”
Jayne Ellspermann, a former principal in Florida, acknowledged that while K-12 leaders across the country have an obligation to ensure students are safe on school grounds, not all districts are on the same level. Some have robust supports with clear guidelines and procedures, she said, but in other communities “this situation might not have ever occurred and they don’t have a framework to work with.”
She said federal oversight is beneficial for communities lacking strong procedures, but “the local level is the most appropriate” place for situations to be handled.
“We need to trust the schools and law enforcement and the local social service agencies to do their jobs to support students and schools in situations like this,” said Ellspermann, who recently completed a one-year stint as president of the National Association of Secondary School Principals.
In response to potential policy shifts under the DeVos administration, Ellspermann said it’s important to “to look at different procedures and ensure that they are appropriate for the current day and time, and so I am open to looking at different procedures that we have in place to see whether or not they are necessary on many levels.”
Gwinnett County Public Schools officials didn’t respond to requests for comment. Naomi Gittins, managing director of the National School Boards Association, and Phillip Hartley, its vice chair, were listed among those who attended a Title IX listening session with DeVos, but neither responded to requests for comment. Francisco Negron, the group’s general counsel, was traveling outside the country and could not be reached.
After the Obama administration released its 2011 guidance, Negron raised several concerns, joining the ranks of some college officials who have argued that it’s vague and inconsistent. The department, he told Education Week, needed to better clarify when an off-campus incident should prompt district intervention.
“Say the allegations haven’t been proven,” Negron said at the time. “It’s not clear from the department’s guidance what the district’s responsibility would be.”
An obligation to help
The prevalence of child sexual abuse is difficult to pinpoint because victims often do not report the attack, though studies have shown that about 20 percent of girls and 5 percent of boys are victims of sexual abuse. In fact, 44 percent of attacks take place before the victim enrolls in college. And children who experience sexual violence are nearly 14 times as likely as those who don’t to experience rape or attempted rape in their first year of college, according to the National Center for Victims of Crime.
More than half of attacks occur at or near the victim’s home, and 8 percent take place on school property, according to the Rape, Abuse, and Incest National Network.
In the first year of Obama’s presidency, in 2009, the Office for Civil Rights received just 11 Title IX sexual-violence complaints against K-12 schools, according to federal figures. By the end of his term, in 2016, that number jumped up to 83, totaling 265 K-12 complaints over the eight-year period.
Additionally, officials at the Office for Civil Rights resolved 371 sexual-violence complaints against K-12 schools and colleges, including a compliance review of California’s West Contra Costa Unified School District, where federal officials found sexually harassing behavior among students “permeated the district’s elementary and secondary schools” following a 2009 high school gang rape.