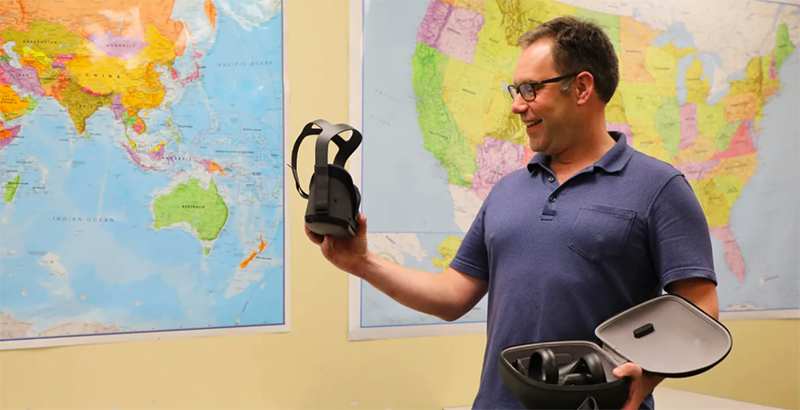 The half hour before class is one of the most important times of the day for teacher David Beatty.

He picks current events to discuss with his high school students – on a recent Monday morning, it’s the war in Ukraine and the Grammy awards. He gathers books and materials for the day, loading it all into a cart to wheel from room to room.

But the most essential piece of the morning hangs on a bulletin board in the teachers’ lounge: an intake list of the teenagers brought to the Lancaster County Youth Services Center over the weekend.

A Lincoln Public Schools teacher, Beatty is one of the five teachers in the Pathfinder Education Program, based in the Lancaster County Youth Services Center, tasked with educating Nebraska youth while they’re detained and awaiting court decisions.

At all four detention centers, teachers like Beatty educate teens from 7th to 12th grade. Depending on their cases, they stay anywhere from a few weeks to a few months.

The constantly changing group of kids bring different levels of trauma and learning challenges into the classroom.

Beatty and teachers like him at Nebraska’s three other juvenile detention centers serve as one of the last lines of defense against that trauma and those learning challenges. Against sometimes long odds, they try to keep students learning.

“A lot of our students have, for some reason or another, not had a successful school history,” said Randall Farmer, educational director of the program. “I have to get them to want to learn and love learning again, if that’s not part of who they are already.”

Between swigs of coffee, Beatty reads each file for the new students brought in over the weekend, familiarizing himself with their academic and social emotional needs.

By 8 a.m., he gathers his books, projector and dry erase board and wheels them all to the first of four housing units he teaches.

There’s the quarantine unit, where the incoming teens spend 10 days secluded in rooms to prevent the spread of COVID-19 before being put in a housing unit. Beatty and his co-teacher hold lessons through closed glass doors.

There’s the high-security boys’ unit, where the boys come out of their rooms to sit at plastic desks spaced around the common area.

There’s the resource area, used by the two other lower security units. It’s the part of the building that most resembles a classroom, complete with books, computers and posters on the walls.

Nearly 9 out of every 10 students enter juvenile detention with credits that put them below grade level, said Dave Collins, principal of the education department at the Douglas County Youth Center. Thus, credit recovery – trying to get students back on track to graduate – is a main focus for program teachers.

“A lot of times, some of these kids were the unteachables,” librarian Susan Helming said. “People just pass them on because they can. When you see a senior that comes in here with a first-grade reading level, you’re wondering, how did you get through 12 years of public school? How is that possible?”

For many students, their time in a juvenile detention center could be the first time they get one-on-one attention from their teachers, she said. It’s often the first time a teacher has focused specifically on that student’s learning challenges.

Helming became a teacher at the Douglas County Youth Center after six years working as a guard in the same units where she now teaches.

When teens need more individual attention, or time to focus and read in a quiet space, they get sent to her in the library.

Sometimes, that time isn’t just for extra help with reading. When students are struggling to behave in class, one-on-one time with Helming in the library can help calm them down.

Some days, that time to cool down goes smoothly. Others, she ends up with ripped up books.

Some kids are angry, Collins said. Some are defiant. Some are mad at the police. And others are nearly silent.

“A lot of them look scared,” Collins said. “Never been here before.”

Helming has to count her pencils at the start and end of the day to make sure they aren’t being used as weapons. Teachers carry walkie talkies to communicate both with each other and detention officers. Kids in rival gangs can’t be kept in the same unit, and moving students through the halls has to be timed to avoid encounters that could turn into fights.

But the classroom is a judgment-free zone, teachers said.

“I’ve been given a task by the state of Nebraska to teach them. And that’s what I’m going to do,” Helming said. “Some of the most respectful kids I’ve worked with have been in here for murder.”

In both the Lancaster and Douglas County detention centers, students come from all over. Their families have fled violence from countries like Sudan, Syria and El Salvador, ending up in Nebraska. Or they’re locals – some have never set foot west of 72nd Street in Omaha, Helming said.

“If anything is going to link them together, it’s going to be survival,” Helming said. “Some kids are the parents of a family. They’re the ones who are taking charge of their siblings. There’s a lot of survival going on.”

Helming once had a student tell her his mother said she’d wished she’d gotten an abortion.

Another girl said she had to choose between staying home and getting raped by her mother’s boyfriend, or running away and having the police called.

“She just looked at me, and she says, ‘I just didn’t feel like getting raped,” Helming said.

Pathfinders staff care for the kids year after year, but they all fall into a certain amount of compassion fatigue, Farmer said. To see a teen leave detention seemingly on the right path and excited about learning – only to have them return a year later – takes a toll on both students and teachers.

“These kids are incredibly valuable,” Beatty said. “They’re going to be productive members of society. But they’ve hit a speed bump in their early life.”

After teaching five classes and grading work, Beatty and his fellow teachers leave for the day. But it isn’t unheard of to walk out to the parking lot and meet a former student, now a grown adult with a spouse and children, Farmer said.

“They’ll say, ‘I wanted to bring them back here to show them where I decided to change my life, and I wanted to thank all of you,’” Farmer said.

This originally appeared at The Flatwater Free Press and is published here in partnership with the Solutions Journalism Exchange.