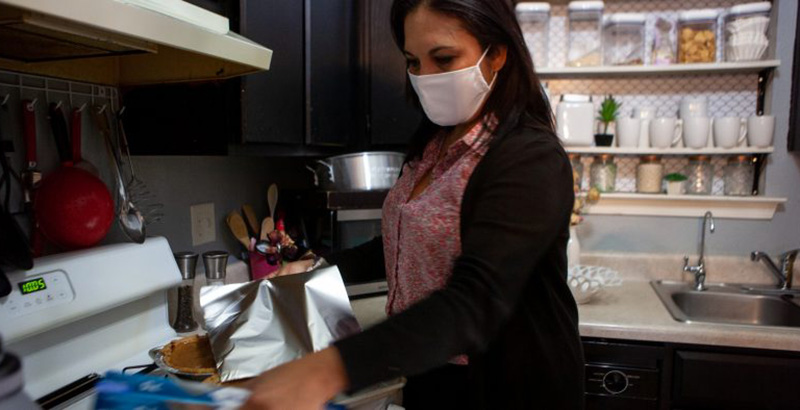 Giselle Paredes wraps a homemade apple pie in her kitchen. Paredes loves to cook and bake but has to devote most of her time to her classes at El Paso Community College, where she is studying accounting. (Corrie Boudreaux/El Paso Matters)

For the first time in her life, Giselle Paredes needs help feeding her family.

“Many times I don’t have something to cook so I’m like, ‘what am I going to do?’” Paredes said. “They’re hungry because they’re studying.”

The 45-year-old wife and mother of two says she has little time to focus on her own educational studies as an El Paso Community College accounting student while also caring for her household.

The COVID-19 pandemic has highlighted how college students often struggle fulfilling basic needs such as food and shelter while pursuing an education. In 2019, 45% of students in higher education reported experiencing food insecurity in the prior 30 days, including 48% of community college students. That was before the pandemic and the economic disruptions it caused.

In March, EPCC released findings of a student questionnaire that surveyed students about their basic needs during the pandemic. Of the 1,399 students that participated, 39% experienced food insecurity 30 days prior.

“I feel bad to say help me with food or cooking,” Paredes said about her two children, one a university student and the other a high school student.

The U.S. Department of Agriculture defines food insecurity as, “a household-level economic and social condition of limited or uncertain access to adequate food.” 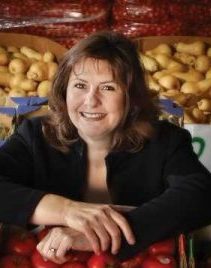 Goodell said that food insecurity is a transient issue and typically not a permanent condition.

High levels of poverty and what are known as “ALICE households and individuals”— asset limited, income-constrained, employed — are closely correlated factors that may contribute to El Pasoans being food insecure, Goodell said.

“People are working but not bringing enough income to pay for basic needs,” Goodell said of the ALICE category.

Those who find themselves food insecure may feel that others are looking down on them, she said.

“The stigma around food insecurity is pretty pervasive,” she said. “People often feel ashamed when they cannot feed themselves and their family. I can understand that feeling but I believe people deserve food because they’re human beings.”

But that’s still not enough. “Our challenge is finding enough food to meet the needs of El Pasoans,” Goodell said.

Insecurity during a pandemic

Paredes said she is grateful that she can receive help from EPCC to feed her family.

“It was amazing for me to open my email and see there’s a lot of help,” Paredes said. 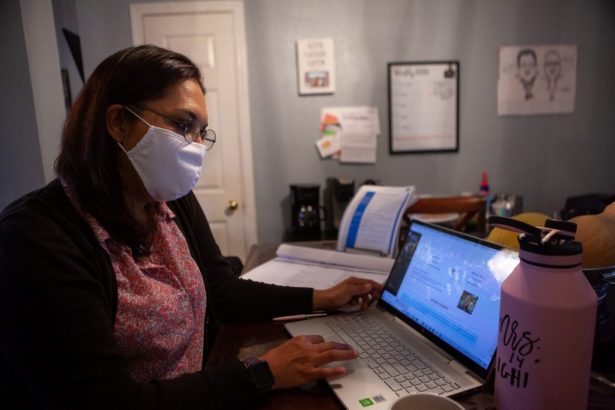 “They came to my house, they used gloves, masks and I was like, oh woah,” Paredes remembered. “I remember that day. I was busy and was so grateful there was food.”

Under the instruction of Chef Daniel Guerra, who created the program in April 2020 with the help of other faculty members, the program has become an extension of the school’s culinary program.

“When Hurricane Katrina happened and they brought folks out of New Orleans to El Paso, EPCC was there. We set up in the convention center, served meals to those folks three times a day and we were involved,” Guerra recalled.

Now with a pandemic impacting his hometown, Guerra said he felt like he was sitting on the sidelines.

“I felt terrible because I couldn’t do anything for my students,” he said.

A year later, the program has expanded outside of its original seven faculty members and now includes the participation of students who help make weekly meals.

With collaboration from the school’s Tejano Food Pantry, Guerra is able to directly contact students who have filled out the Coronavirus Aid, Relief, and Economic Security (CARES) forms or emergency aid forms directly provided by EPCC.

Paredes said she filled out the CARES form to indicate her household was food insecure. Soon after, she received a call asking if she would like food to be delivered to her home.

“It was my first time filling out the form,” Paredes said. “I didn’t know what was going to happen.”

Among the 39% of students who surveyed as food insecure, almost half were worried that they would run out of food before having money to buy more, according to EPCC survey data.

“We don’t just feed the student, we feed the family,” said Arvis Jones, EPCC’s director of student leadership and life.

Jones, who helps oversee the school’s Tejano Food Pantry, said despite survey results of a high need for food for students, the number who utilize the food pantry is low. She suspects that students are using other food banks and receiving help elsewhere.

“We want students to know it’s there if they want to use it,” Jones said.