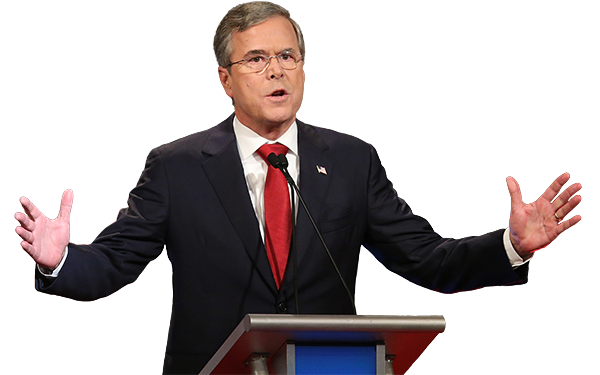 Education, in particular K-12, hasn’t been a big issue in the 2016 campaign: the two debates in the last week featured barely a peep on education. Jeb Bush, perhaps best known for the sweeping reforms he brought to Florida’s schools during his tenure as governor, seems set to change that. (Other candidates in both parties, including, recently, home school champion Ben Carson, have also offered plans.)

Bush released a plan Sunday that would, at its broadest levels, return authority to states and give students in all types of schools  more choices. Here are five things to know about Bush’s education plan.

ALL IN ON CHOICE — Bush’s plan calls for greater choice at every stage of schooling, from preschool through college. Most of these choice options would be administered by converting 529 plans, which give families  tax benefits when they save for college , into education savings accounts that could be used to pay educational expenses of all types at all levels of schooling. Bush would allow family members, employers, and others to contribute to the plans, and would use tax breaks to encourage contributions to low-income children.

In the K-12 arena, Bush proposes doubling federal supports for expanding high-quality charter schools and maintaining the D.C. Opportunity Scholarship Program, which funnels federal dollars to low-income Washington parents to help them pay for private school tuition. President Obama has in past budgets proposed eliminating the program, and he and congressional Democrats opposed a bill proposed this fall to extend it.

Bush also wants to let Title I money for low-income children follow them as they move among schools. He’d also do the same with money given out through the Individuals with Disabilities Education Act, which helps schools with the additional costs of educating children with disabilities. (For these programs, though, it would be left to states’ discretion whether or not each participates.) Congressional Republicans proposed the Title I portability idea during this year’s debates to reauthorize No Child Left Behind but it was not included in the final compromise.

ADDRESSING THE YOUNGEST LEARNERS — Bush, like many Republicans, says there are dozens of overlapping federal programs for preschool. (That number comes from a 2014 report by the Government Accountability office that found 45 federal programs for young children. Democrats often note that the report counts programs that have other primary purposes, like the school lunch program or child care supports given to victims of domestic violence.)

Bush proposed giving the money, which totals in the billions of dollars, to states to refund to low-income parents to use as they see fit, for center-based or home-based programs, at varying times of day. States would be tasked with ensuring program quality and rigor. The program would give about $2,500 to each family in states that participate; Bush’s plan notes that “in most cases it will require more than the federal dollars to ensure adequate funding for a strong start for a low-income child.” The federal dollars are intended to supplement local, state and family spending.

NO MENTION OF COMMON CORE — Bush throughout the campaign has been criticized as too liberal to be the Republican nominee because he backs the Common Core State Standards. The only question asked about K-12 in the 10 debates held by both parties, in fact, happened back during the very first debate, when Bush was asked about his support for the standards. (Ohio Gov. John Kasich is the only other Republican candidate who backs the standards.) His new education, plan, though, doesn’t mention standards or the Common Core once. It does say that Bush’s goal is to ensure that all Americans, regardless of where they grow up, graduate from high school “college or career ready.”

NEW INNOVATION FOR HIGHER EDUCATION — Bush proposed a new system for higher education financing, one that would offer most high school graduates a $50,000 line of credit to use for higher education. Low-income students, and low-income adult borrowers, would also get an additional Pell Grant. Pell eligibility depends on income; the maximum award for this academic year is $5,775. For young people, that Pell allotment would be decided when the student was in eighth grade. (College access advocates have said making students aware of their financial eligibility earlier makes college seem more in reach as they enter high school.)

The plan also would allow students to use the funds at a wider variety of post-secondary programs beyond traditional four-year and community colleges. Currently, programs that are eligible for financial aid must go through a cumbersome accreditation system that often isn’t sufficiently flexible to judge new types of post-secondary programs. New programs, would be accredited by industry associations or other groups. The programs would have access to the federal loan money for their first classes of students once they had a proven track record of success.

Borrowers would then repay 1 percent of their income for every $10,000 of that allotment used, for a maximum of 25 years. The most borrowers would repay is 1.75 times what they borrowed, the plan said. (According to the federal government’s student loan repayment calculator, a graduate with $50,000 in debt at the current 4.29 percent interest rate and a $45,000 per year salary would repay between $61,606 and $89,325 total, depending on the repayment plan used. That’s somewhere between 1.23 and 1.78 times the initial loan.)

Bush also wants to help those who have already borrowed by encouraging people to use existing repayment programs, allowing borrowers to extend their repayment period, and making it easier to discharge student loans in bankruptcy.

NO FEDS ALLOWED – Unlike Florida Sen. Marco Rubio and others who have called for the total abolition of the federal Department of Education, Bush’s plan would continue it. He would, however, cut its roughly 4,000-member staff by 50 percent.

Bush’s plan pledges that he will defend state control of education and adds that “the federal government cannot, and should not, impose a one-size-fits all model of anything on states.”

He thinks the flexibility given to states under the newly adopted Every Student Succeeds Act in terms of school accountability should be expanded to other, unspecified areas. He’d also propose giving low-income and high-needs schools the opportunity to earn additional federal dollars based on improving student outcomes.