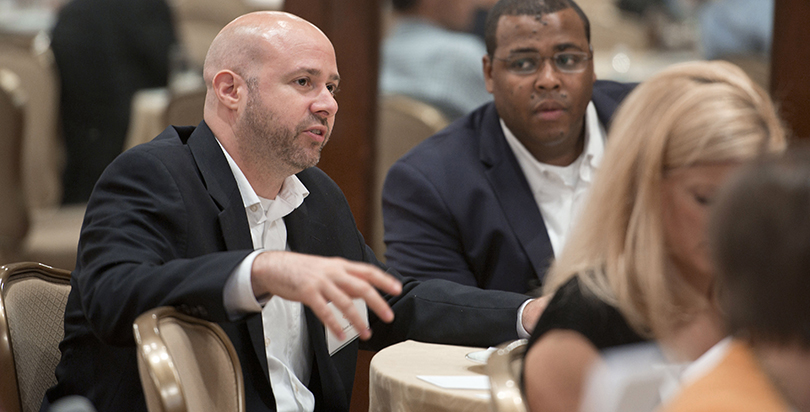 Support for school choice options like charter schools likely just got a whole lot stronger in the Trump White House. But when it comes to questions of national standards and social justice, things just got even more unpredictable.

Last week, Politico reported that Jason Botel has been tapped to serve as a senior White House adviser for education. Botel, generally viewed as a progressive, has been engaged in education reform for decades, most recently as executive director of MarylandCAN, the Maryland branch of education reform advocacy group 50CAN.

From his support for the Common Core State Standards to the Black Lives Matter movement, here are five things to know about the Trump administration’s surprising new pick:

Botel has played a prominent role in education reform in Maryland

Botel has spent his entire professional career working to reform Baltimore’s public school system. After graduating from the University of Pennsylvania, he taught for three years at Baltimore’s Booker T. Washington Middle School through Teach for America. In 2002, he completed the KIPP School Leadership Program and launched KIPP Baltimore charter schools before joining MarylandCAN in 2013.

Most of Botel’s statements about education mirror the movement’s general call for reform.

“Children should have access to high-quality education regardless of where they live,” he wrote in his bio on the 50CAN website, which is no longer online. “If we as a society build the will to do so, we can provide high-quality public education for all children in every neighborhood.”

Botel’s work in Maryland included helping to develop a principal mentoring program, which partners school leaders with peers who have strong track records in raising student achievement among children from low-income families. He also played a key role in Gov. Larry Hogan’s 2015 bill expanding the number of charter schools in the state.

During his time as executive director of KIPP Baltimore, Botel sparred with the local teachers union, arguing that an increase in overtime pay would prevent the charter network from providing extra instruction time necessary for the schools’ success.

The appointment comes at a big time for Maryland education reform

Typically a liberal enclave, Maryland is in the midst of a big push to expand school choice, driven largely by Hogan, a Republican, and his appointees on the state education board.

Last week, Hogan announced plans to encourage expansion of charter schools by creating a board to authorize and fund them. The state also has a private school voucher program, approved last year in a surprising vote in the Democrat-controlled legislature.

Earlier this month, Hogan announced a plan to double the voucher program over three years, and Andy Smarick, the state board’s president, has suggested expanding school choice options even further.

Smarick said he will miss Botel’s voice in the local education reform debate. But, he said, “In the long term, it’s always nice to know, anytime there’s an issue in Maryland that is going to have to make its way up to the U.S. Department of Education or the White House, that there’s going to be someone there who knows about our context, our history, and will care about it.”

When Mike Petrilli heard Botel had accepted a White House post, he was shocked.

“This is an administration that even some mainstream Republicans are not agreeing to serve, so to have a progressive Democrat to serve is certainly newsworthy,” said Petrilli, president of the Thomas B. Fordham Institute, a conservative education policy think tank.

Though a Trump critic, Petrilli has been optimistic about the new administration’s stance on reducing Washington’s role in education policy. But the addition of Botel, he said, complicates that position. “My sense is he is someone, like many left-of-center education reformers, who believes in an activist federal role in education,” Petrilli said.

On Twitter, Jeanne Allen, CEO of the Center for Education Reform — which endorsed Trump’s education platform during the campaign — argued that Botel had actually hurt Maryland’s charter school law during the 2015 expansion. The center called for a veto after legislators watered down some state control over charters.

But others praised Botel’s work in Baltimore and beyond. Smarick said he has worked with Botel for more than a decade and pointed to his three years of teaching experience as a positive addition to the new administration.

“This isn’t just like an advocate. This isn’t just someone who talks about these issues. This is someone who has walked the walk and has done extraordinary things for low-income kids in our state,” Smarick said. “It warms my heart that he’s gotten recognition, and he’s going to continue to do work from a different perch. I’m happy for him, and I’m happy for the administration.”

Jenese Jones, MarylandCAN’s interim executive director, offered similar praise, noting that every administration includes people who don’t necessarily see eye to eye on policy. “I’m not saying that’s the case here, but I do know that where it relates to choice for kids and providing robust opportunities for children and families to have access to high-quality education, that is something that Jason will never back down on,” she said.

He has defended the Common Core State Standards

During the campaign, Trump vowed to “end” the Common Core. Education Secretary–designate Betsy DeVos said on her website that she doesn’t support the standards because they’d been turned into “a federalized boondoggle.”

That’s where Botel is likely to split with others in the administration. In a 2014 tweet, he said Americans want national education standards and should support the ones created by the states — the Common Core.

“In terms of standards, you know, Jason is a state-level advocate,” said Marc Porter Magee, 50CAN’s founder and CEO. “What he’s interested in is state standards and how they can be effective, and I think he’s going to bring that sensibility to the White House.”

He has expressed support for the Black Lives Matter movement

In 2015, Baltimore became ground zero for the Black Lives Matter movement after the police shooting death of 25-year-old Freddie Gray. Although the White House has made clear it isn’t sympathetic to the cause, Botel provides a sharp contrast. On several occasions, he has advocated for education reform as a social-justice issue.

“The subjugation of black minds started when slave traders and slave owners made it almost impossible for African Americans to speak their native languages, practice their native cultures, learn to read and write, and build and maintain families,” he wrote in a blog post on the 50CAN website in 2014. “The subjugation of black minds continues today, as we neglect to educate millions of African American children.”

After Gray’s death, Botel wrote in a blog post: “As a city and state we have failed too many of our children. As a society we have created and perpetuated an underclass that is almost entirely black that has been denied a quality education, livable jobs and justice under the law for generations.”

Jones called Botel a “bridge builder” and expressed optimism over his role in the White House. “He’s so passionate and has such integrity around social justice, I think that he will definitely bring a different perspective,” she said. “And I’m hopeful that that perspective he brings will certainly help just to open their eyes to different ways of looking at some of those issues.”