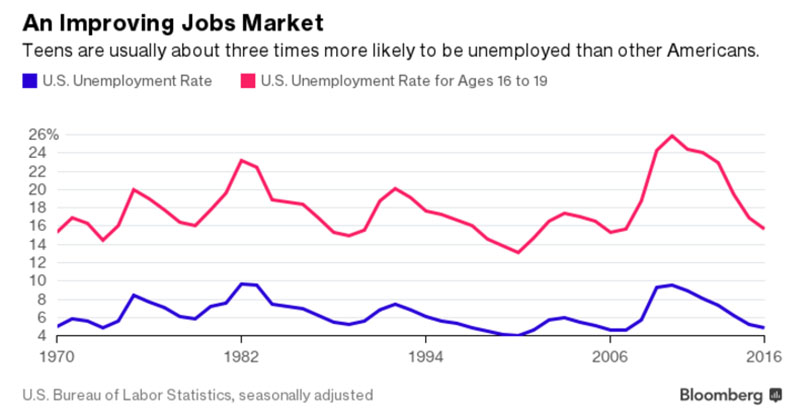 Fewer teenagers will spend the summer bussing tables and overseeing water slides than in decades past, according to several new media analyses.
Some of this trend can be attributed to teens being pushed out of the workforce by immigrants and older employees, but reports from Bloomberg and The Atlantic both note a key change in teen behavior: Some adolescents are foregoing the summer job in favor of investing in their education, opting for summer classes, unpaid internships, and volunteer projects.
Those diligent students are making a shrewd decision, aiming for the higher salaries and better job security that come with increased educational attainment. But a new publication from researchers at the University of Illinois at Chicago suggests that joblessness among young people, especially those who are no longer enrolled in school, could cost U.S. taxpayers untold billions in the future.
The report, The High Costs for Out of School and Jobless Youth in Chicago and Cook County, notes that the difference in tax contributions between a high school graduate and a non-graduate totals $197,055 over a working life of 45 years. Multiplied by the nearly 50,000 jobless, out-of-school young adults in Illinois, that comes to a staggering $9.5 billion.
The study looks at Illinoisans ages 16 to 24 who are classified as “disconnected”: outside the K-12 education system, lacking a high school diploma, and unemployed. Their ranks in Cook County, home to Chicago and the second-largest county in the United States, have fallen since the worst of the Great Recession but still amount to 45 percent of the entire state’s unemployed young adults.
In a press conference Monday, Illinois Senator Dick Durbin hailed the report’s findings, observing that “the best anti-poverty, anti-crime, anti-violence program is a job.”
Durbin and suburban Chicago representative Robin Kelly, also in attendance, have both sponsored federal legislation to boost employment among young people.
“The cost of youth joblessness for individuals, households, and the state as a whole just isn't worth it,” co-author Teresa Cordova told the Chicago Tribune.
Solutions to stem the tide of the disconnected are not concrete. The report notes that in Chicago, low-wage jobs are overwhelmingly concentrated in parts of the city (such as the famous Loop) that are difficult to access for the chronically unemployed. And even among those who manage to graduate, post-secondary education is increasingly seen as a prerequisite for a middle-class career.
“This is a country-wide issue and poses a significant risk to the economy of our country — you could say we are a nation at risk,” Jack Wuest, executive director of the Alternative Schools Network, said in a statement. “But there is a great opportunity here to marshal and build a campaign to prepare and employ the jobless youth and young adults that our economy needs now and will need in a much greater way in the future.”
Submit a Letter to the Editor
June 12, 2017