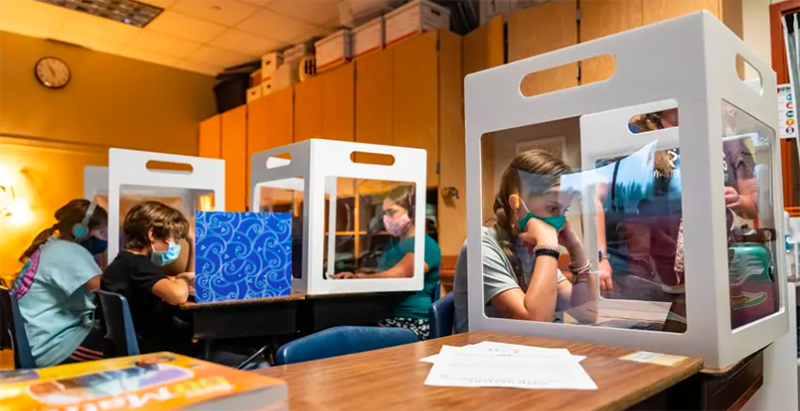 The federal government is investigating the Texas Education Agency after deeming that its guidance prohibiting mask mandates in schools last week may be “preventing school districts in the state from considering or meeting the needs of students with disabilities.”

The agency did not immediately respond to request for comment or say how or if it will enforce the order or if every school district in the state has been notified of this change.

In a letter to TEA Commissioner Mike Morath, federal officials said the investigation will focus on whether or not students with disabilities who are at greater risk for severe illness from COVID-19 are prevented from safely returning to in-person education, which would violate federal law, wrote Suzanne B. Goldberg, the acting assistant secretary for civil rights.

Goldberg wrote that her office is worried that Texas’ mask policy does not allow for “an equal educational opportunity to students with disabilities who are at heightened risk of severe illness from COVID-19.”

The education department has launched similar investigations in Iowa, Oklahoma, South Carolina, Tennessee and Utah. It had not done so in Texas because the TEA was previously not enforcing the governor’s order while there was ongoing litigation.

Disability Rights Texas, an advocacy group, filed a federal lawsuit in late August against Abbott and Morath. The group, which filed the lawsuit on behalf of 14 children, says that the governor’s order and the TEA’s enforcement of it deny children with disabilities access to public education as they are at high risk of illness and death from the virus. The group claims that because of this, the state is violating the Americans with Disabilities Act and Section 504 of the Rehabilitation Act, which forbids organizations and employers from excluding or denying individuals with disabilities an equal opportunity to receive program benefits and services. The lawsuit has not yet been resolved.

Dustin Rynders, supervising attorney at Disability Rights Texas and lead attorney on the lawsuit, said in a statement that the TEA’s latest guidance is “reckless” and that the agency shares culpability for the “dangerous” situation in Texas schools. The organization’s case is set for an Oct. 6 trial.

“The Governor’s order and the Attorney General’s enforcement and intimidation campaign are creating an impossible situation for students with disabilities in Texas schools,” Rynders said. “Our state’s refusal to allow mask requirements is blatantly discriminatory to children with high risk health conditions who can’t yet be vaccinated.”

The TEA’s guidance released Friday is the latest development in an ongoing war over coronavirus precautions that has left school officials and parents with whiplash about what requirements are — or aren’t — in place.

In early August, the agency had said districts couldn’t mandate masks because of the governor’s order. But as the new school year approached, a surge of coronavirus infections and hospitalizations prompted some local officials to buck Abbott’s prohibition in order to protect teachers and schoolchildren. Coronavirus vaccines still aren’t approved for children younger than 12.

About a month into this school year, the number of reported coronavirus cases among students is approaching the total from the entire 2020-21 school year. State data on school cases is incomplete and likely an undercount. TEA suppresses some districts’ case counts to protect student privacy, and not all districts report student and staff cases to the state despite agency guidance requiring otherwise.

School districts, cities and counties have fought Abbott’s order in court, and some have won temporary restraining orders allowing them to require face coverings. Meanwhile, Attorney General Ken Paxton has sued several school districts he says have mask mandates, making good on the state’s threat of coming after districts that defied the governor.

Those lawsuits aren’t all yet resolved and some have so far played out in different ways. That’s created even more confusion as a patchwork of differing local rules have popped up throughout the state.

Shannon Holmes, executive director of the Association of Texas Professional Educators, said in a statement that school districts should be free to make their own decisions to protect students and staff and that includes “protecting groups of high-risk students so as to provide the free appropriate public education required under federal law.”

The Texas State Teachers Association said in a statement that it applauds the federal governments investigation into the TEA and the Texas mask policy. Once again, the organization called on Abbott to drop his order so schools can impose a mask mandate.

“Educators and parents want to keep students safe. But the governor cares less about the health and safety of children than he does about his political base,” said organization president Ovidia Molina. “That is not leadership. That is pandering.”

Kevin Brown, executive director of the Texas Association of School Administrators, said in a statement that his organization supports local control of public schools when it comes to making decisions about student and staff safety.

“Texas is a very large state and each community has different situations, needs and expectations, and we think they are uniquely situated to decide what is best for their students and staff,” Brown said.

The Texas Tribune reached out to Houston, Dallas, Fort Worth, Austin and Round Rock school districts for comment as well as the Texas Association of School Administrators. None immediately responded.

Disclosure: Association of Texas Professional Educators, Raise Your Hand Texas, Texas Association of School Administrators and Texas State Teachers Association have been financial supporters of The Texas Tribune, a nonprofit, nonpartisan news organization that is funded in part by donations from members, foundations and corporate sponsors. Financial supporters play no role in the Tribune’s journalism. Find a complete list of them here.