In this district, students plant, grow and harvest the fresh fruits and vegetables that become school meals

Five years ago, Joseph Otranto, child nutrition director at Halifax County Schools, was working on a SWOT (Strengths, Weaknesses, Opportunities, and Threats) analysis for his department. The analysis highlighted the economic and academic challenges facing the district, which has a poverty rate of almost 24% and a food insecurity rate of roughly 18%. But one of the strengths the analysis identified was a plentiful natural resource in the rural county — land.

“At one time, [Halifax] was a growing farming community, and over the past 50 or 60 years, 88% of family farmers have disappeared,” said Otranto. “So we saw an opportunity to give our students a little hope that possibly they could become entrepreneurs and farmers in the future, and in the process, teach them where our food comes from.”

With that, the idea for Greenleaf Farm was born. 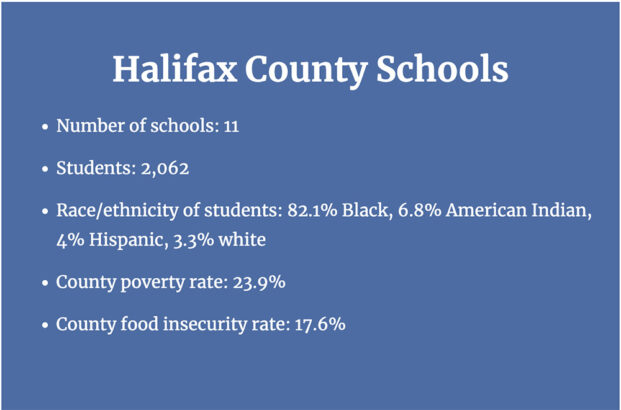 An idea is planted

Otranto has been in school food for 26 years. One of his first positions was in Asheboro City Schools, where he integrated nutrition instruction into the health curriculum in middle schools, drawing on his previous experience as a hospital nutrition director. Then, seven years ago, Otranto began working in Halifax County. Around the same time, Dr. Eric Cunningham became the new superintendent for the district.

“I told him, ‘Hey, we’ve got a lot of land here. I know we have a horticulture program. What do you think about building a farm?’” said Otranto.

According to Otranto, Cunningham was immediately drawn to the idea. Cunningham let the Career and Technical Education (CTE) department know that this was an idea he wanted to see brought to fruition. From there, Otranto began collaborating with the CTE department, including a horticulture instructor who had some experience farming on school grounds.

They set to work building the farm from scratch in Scotland Neck. Using repurposed land at Brawley Middle School, which had been closed for a few years, they created an initial one-acre farm out of the old baseball field. However, Halifax’s Southeast Collegiate Prep Academy was more than 10 miles from the farm at Brawley, making the transportation of CTE students who learn at the farm complicated.

Ultimately, the district decided to set up the present-day, nine-acre Greenleaf Farm at Enfield Middle S.T.E.A.M. Academy, located closer to the high school. This location also had flatter and more sandy soil, allowing the farm to plant vegetables and fruits that grow better in that type of soil, including cantaloupes and watermelons.

GAP certification was a crucial step in the farm’s development, because any farm that wants to sell products to schools in the state must maintain an annual GAP certification. The certification process can be time-intensive and expensive — farmers may need to purchase new equipment, and the average cost of a GAP audit in North Carolina is roughly $1,000.

“Everything is tracked from when the seed goes in the ground to when it’s shipped out to you,” said Otranto.

From the farm to the lunch tray

The food on the farm is planted, grown, and harvested by the district’s students from Enfield Middle and Southeast Collegiate Preparatory High School, including those enrolled in horticulture and agricultural science classrooms. The harvest is then processed and delivered to the district’s school nutrition department, where fresh fruits and vegetables from the farm are incorporated into school meals.

Since farming is contingent on the weather, there are no guarantees about what will be harvested. Otranto constantly tracks weather patterns throughout the growing season. After the watermelons, cantaloupes, squash, zucchini, and okra are finished growing in August and September, the farm is reploughed and anything that hasn’t been harvested is turned back into the soil. The farm also rotates plots, leaving them fallow every three to five years depending on what’s been growing.

The fall and winter growing season includes produce like collards, broccoli, mustard greens, kale, cabbage, and romaine — products that Otranto then uses in school meals from mid-November through January. Staggering the timing of plotting different fields allows different quantities of food to come off the farm at different times.

“We learned early on that we can’t utilize everything all at once,” said Otranto. “Because we don’t serve broccoli every day, we don’t serve collards every day. But when it’s available, I will make adjustments in my menu.”

Like all federally-funded school nutrition programs, the meals that Otranto creates using produce from the farm have to meet strict meal pattern and nutrition requirements. These requirements include things like the number and types of vegetables that have to be served each week, including a mix of red/orange vegetables, leafy greens, and legumes.

Since the harvest from the farm can be unpredictable, Otranto said this can make menu planning tricky. He works closely with both the district’s horticulture teacher and dietician to align what is being planted and harvested when. Additional produce from the farm that can’t be used by the school district is donated to local food banks.

“I’m not going to shy away from any produce that is available to harvest. We’re going to utilize everything that we can,” he said.

One day after a harvest, Otranto and his team prepared greens from the farm for lunch at one of the district’s elementary schools. A second-grade class came through the lunch line, and after they sat down in the cafeteria, Otranto overheard a conversation.

“The little girl looked up and she said, ‘My sister planted these greens, and they’re delicious!’ And the whole table put their forks down and started eating the greens. That was just a wonderful moment,” he said.

When Otranto began working with Halifax County Schools, he said the school nutrition menu included mostly convenience items like canned fruits and vegetables. So, he set to work reimagining what school food could be. Otranto built out his team, gave them access to culinary training, and brought in chefs and other speakers to help them think about ways to reform the lunch menu.

“We were looking at minimally processed foods and fresh foods and how that benefits ourselves, our staff, our students — by not filling them up with all kinds of additives and preservatives,” said Otranto.

Now, the school lunch menu is made using speed-scratch cooking and fresh fruits and vegetables from the farm. The school nutrition department also runs a series called “What’s Growing On” at elementary schools where they teach about a specific fruit or vegetable each month and then serve that produce in the cafeteria.

In addition to the benefits that students receive from eating a variety of fruits and vegetables grown on the farm, Otranto said he sees the benefits for the students who gain hands-on learning experience at the farm.

And while Otranto acknowledges that not many students from the CTE program will ultimately choose farming as a career, he said there have been a few graduates who went on to North Carolina State and NC A&T, the state’s two farm grant universities. For Otranto, the program is not just about teaching students how to farm or integrating their CTE coursework but also giving students a sense of hope.

“You can use your own vision, your own dream, to do something maybe that you didn’t think you could do,” he said.

Finding opportunity in the face of challenges

To get Greenleaf Farm off the ground, the district received initial funding from the U.S. Department of Agriculture (USDA) and has received other grants since then. But the main source of funding for the farm comes from the CTE department, which purchases the seeds. Then, the school district’s child nutrition department purchases the produce from the farm using micro-purchasing techniques and USDA waivers.

One of Otranto’s biggest concerns about scaling school farming is the complex regulations that surround school food funding and procurement of food for school meals. School nutrition departments operate financially independently from their school districts, with most of their funding coming from federal USDA reimbursements.

“We’re responsible for our own funding, and that makes a lot of folks reticent about getting into something like this,” said Otranto. “But I don’t see the problem — I see the opportunity.”

Another potential challenge for using locally grown food in school meals is that nutrition departments may lack the facilities and staff capacity to wash, process, and prepare raw fruits and vegetables directly from local farmers. To assist with this, Halifax County Schools partners with Working Landscapes, the same organization that assisted with the farm’s GAP certification. Working Landscapes runs a food hub, which is a facility that washes, chops, and bags a variety of produce from local farms to resell for consumption.

“School kitchens are not built to handle fresh produce … we can’t afford the staff to do that. So, if you can cut it, prepare it, and bag it for us, then we can better utilize it,” said Otranto.

Otranto sees the expansion of partnerships between food hubs and school districts as an important pathway forward to increase farm-to-school efforts. In Virginia, the state department of education is partnering with regional food hubs to deliver roughly $2.2 million in locally produced food to school nutrition departments across the stats through a pilot program funded by the USDA’s Supply Chain Assistance Funds.

In the face of challenges, Otranto says partnerships and collaboration are essential to building successful farm-to-school initiatives.