This is one installment of a special series published in partnership with The Guardian: ‘Disconnected: The Lost School Year.’ See additional coverage of the past year for students and schools: ‘12 Million Students Still Lack Reliable Internet‘ and ‘As Teens Pile on Jobs to Help Their Families, Schools Strive to Keep Tabs on Students They Haven’t Seen in a Year.’

It was the Monday morning before Thanksgiving when a police officer showed up on Tracie Higgins’s doorstep and handed a $439 fine to her teenage son for missing too many days of remote school during the pandemic.

But the bulk of her son Mark’s repeated absences, the Wisconsin mother protested, were the result of faulty school technology, including a Chromebook that wouldn’t charge. Debra Pratt, also of Manitowoc, Wisconsin, faced a similar situation this school year with her son Jason, who was fined for racking up 28 absences that the school district marked as unexcused – including the same day in late September that he tested positive for Covid-19.

“I think it’s ridiculous, absolutely ridiculous, especially during a pandemic when there’s just too many other factors that are playing into this,” said Pratt. Like many children nationwide, she said that Jason struggled to learn remotely. He recovered from the virus after experiencing mild symptoms, but the school disruptions have taken a toll on him both emotionally and academically. “Placing a truancy fine on them is certainly not going to help the situation or make it any better.”

Similar feuds between frustrated parents and overwhelmed school administrators are playing out across the country as the pandemic’s academic upheaval reaches the one-year mark. States continue to enforce laws that require families to send their children to school or face steep punishments for unexcused absences, including fines, community service and, in some states, arrests. These “truancy” rules have exacerbated the pandemic-induced challenges confronting many households, from economic instability and mental health crises to a lack of adequate internet access. It’s often these very hardships, school attendance experts say, that force students to miss school in the first place.

The result is a growing concern among policymakers that pandemic-era absences are funneling children into the juvenile justice system and pushing parents into contentious interactions with child protective services.

Attendance Works, a national nonprofit focused on combating chronic school absenteeism, has urged districts to play close attention to students who aren’t showing up to class during the pandemic and offer help to ensure they don’t fall behind. But the group also advised districts to resist punitive responses to truancy that “disproportionately impact students based on race, class and poverty and do not solve the problems that contribute to why students are missing school and can be especially harmful in this moment of crisis.” 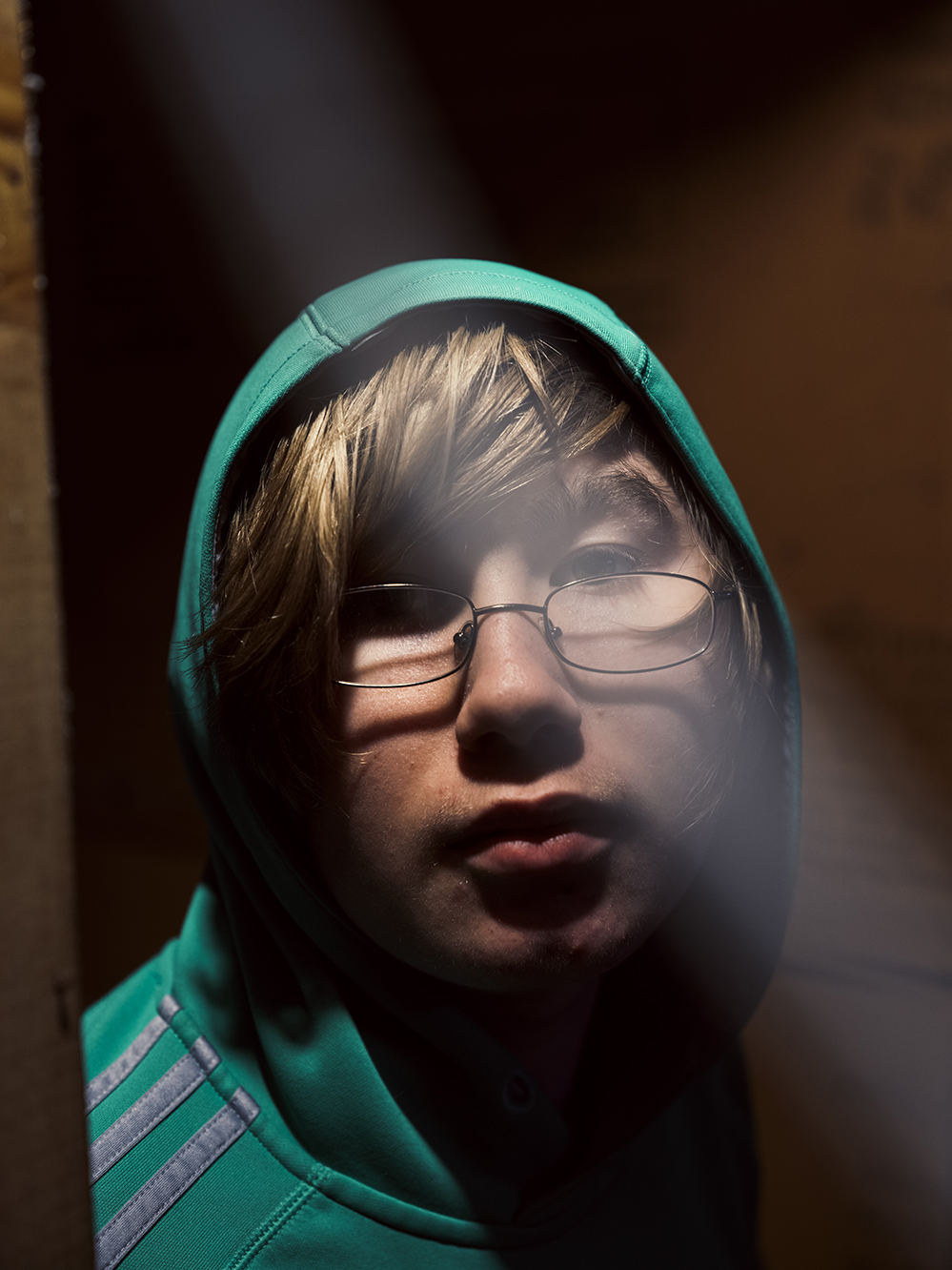 In Manitowoc, a 33,000-person enclave along the Lake Michigan shoreline, truancy citations have spiked this school year, generating a flood of posts from frustrated parents on a local Facebook page. So far, officials have handed out 249 “habitual truancy” citations to students who’ve accumulated at least five unexcused absences, according to municipal court records. Before the pandemic threw the Manitowoc school district into disarray, officials issued 198 truancy citations during the 2018-19 school year.

Mark Holzman, the district superintendent, declined to comment on specific cases but acknowledged that some students were marked with unexcused absences in error — but teacher mishaps, he said, weren’t widespread enough to explain habitual truancy. Students are only fined for truancy after district officials make multiple failed attempts to re-engage them in school, he said.

“It’s in nobody’s best interest to provide fines,” he said, but city rules allow the fines to be expunged if truant students begin attending classes regularly or complete community service at a rate of $10 per hour to pay them off. That strategy, he said, has been “relatively successful” in encouraging attendance. The schools chief recognized the negative impact remote learning has had on student attendance and engagement and the difficulties of holding students accountable for attendance when learning is not taking place in person.

“Students not attending likely means students not being successful,” he said. His point is backed by years of research tying chronic absenteeism to a host of negative factors, including a heightened risk of dropping out of school and becoming involved in the criminal justice system. Even before the pandemic led to a spike in student absences, more than 6.5 million U.S. children missed at least 15 school days each year. 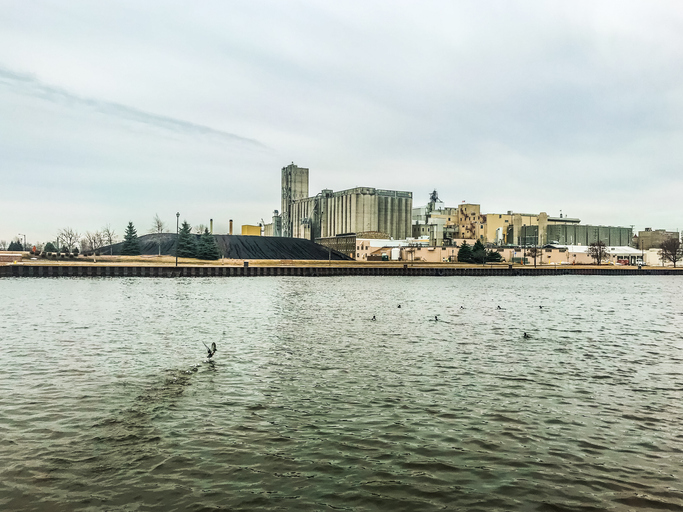 The city of Manitowoc, Wisconsin.

Yet it’s often truancy rules that introduce students to the juvenile justice system in the first place as many states rely on courts and criminal sanctions – including incarceration – to enforce attendance. In turn, truancy rules could perpetuate racial disparities in that same system. Nationally, students of color are disproportionately referred to court for truancy compared to their white classmates.

In recent years, policymakers across the U.S. have been shifting truancy rules away from punishment as a growing body of research has found that punitive measures can backfire. One recent report by the nonprofit Council of State Governments Justice Center, for example, found that South Carolina students placed on probation for truancy issues wound up with even worse school attendance than they had before the courts got involved.

Analysis: Kamala Harris Changed Her Thinking About Absenteeism, Truancy & Enforcement. What That Might Mean for Her as VP

“That wasn’t really making a dent in the truancy problem and, in fact, we saw that was leading students to not get licensed to drive,” she said. “It was creating barriers for employment, barriers for success and that was not our goal.”

But many of the Manitowoc families who’ve faced fines are struggling. Higgins, a stay-at-home mom, said there’s “no way” she’d be able to pay the fine herself. Though a warning letter sent to Higgins threatened a driver’s license suspension should they fail to pay the $439, the municipal clerk’s office said overdue balances are now forwarded to a state debt collection agency.

“Ya, they are giving the kids an incentive that, ‘OK, if you do nine weeks of school and pass all of your classes the fine goes away,’ but that’s not the point,” Higgins said. “The point is they shouldn’t have to give these fines out to these kids – especially now.” 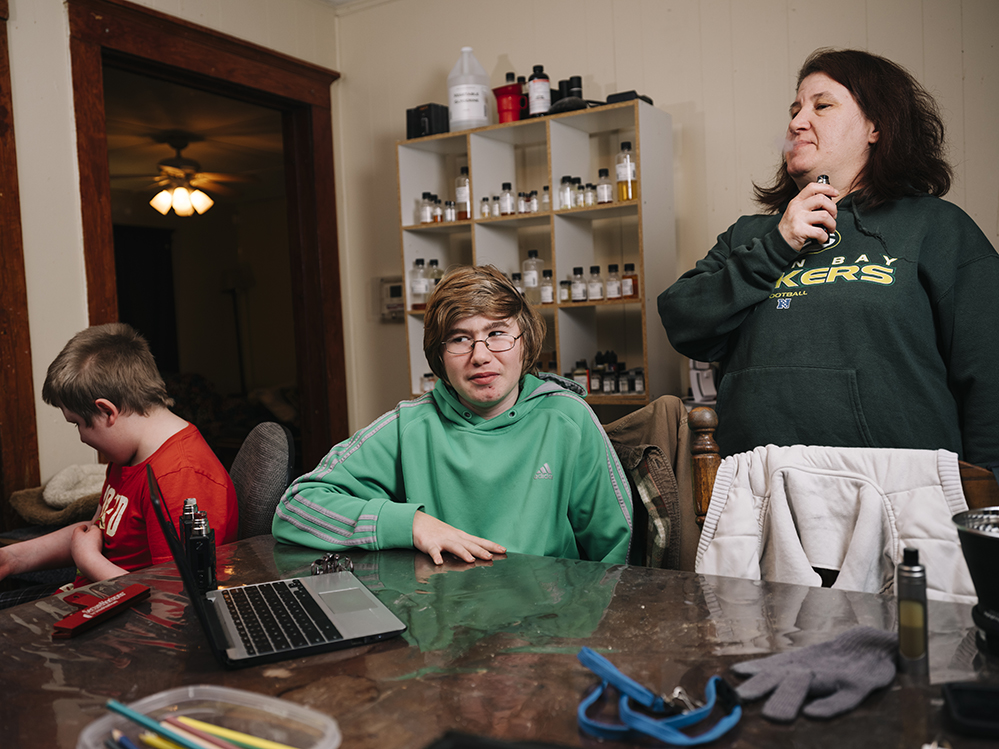 Tracie Higgins and her children hang out in their home in Manitowoc, Wisconsin. Higgins said the city acted unreasonably when it fined students for missing remote school during the pandemic. (Photographs by Dave Kasnic/The Guardian)

‘A symptom of something bigger’

Some parents would like to see truancy rules taking into account the pandemic’s devastating toll on youth mental health. In one suburban Pennsylvania town, a mother blames her teenage son’s truancy on debilitating depression that appeared at the beginning of the pandemic. Before the outbreak, he used to enjoy computer programming and solving the Rubik’s Cube. Now, he languishes in his bedroom with the lights turned off – and has missed about a year of virtual school. The mother asked that her name be withheld over concerns the school district might retaliate.

Rather than providing the student with the mental health care and special education supports that his mother said he desperately needs, the district pushed the family into a court battle to address his truancy or face punishment, the mother said, costing her more than $1,000 to hire an attorney. The end result, she worries, will be a fine under the state truancy law.

“I can lead him to water, but can’t make him drink,” the mother said. “I was under the impression that I was going to get help from the school,” but oversight by a judge and child protective services hasn’t led to any attendance improvements. The whole situation, she said, has left her feeling hopeless. “Parenting is a full-time job, but this is a lot. It’s taken its toll on me.”

In Pennsylvania, officials with child protective services said they’ve been overwhelmed by the volume of truancy referrals. It’s also become a top issue for Christina Paternoster, project director at the PA Parent and Family Alliance, which provides support to the parents of children with mental health challenges. Paternoster has witnessed firsthand how the pandemic has harmed students’ mental well-being and led some to withdraw from school. Yet the challenges, she predicted, will stick around long after the virus is contained.

“Especially moving forward where we have children who may not have ever had any kind of mental illness in their lives” prior to the pandemic, “as a society we’re going to have to really start to understand what mental illness is and really be more thoughtful on how we accommodate people.”

Even Majerus, the assistant city attorney in Manitowoc, questioned whether the issue belongs in the juvenile justice system, adding that chronic absences are often “a symptom of something bigger.”

“A child is not going to just one day say ‘I’m not going to school,’” she said. Instead, she said it’s critical that policies and taxpayer dollars target the underlying causes of chronic school absences, including poverty, inadequate internet access and shortfalls in mental health care — all issues that have been exacerbated by the public health crisis.

“Once you address that,” she said, “you would see children in school. Truancy would become a blip rather than a trend.”

This is one installment of a special series published in partnership with The Guardian: ‘Disconnected: The Lost School Year.’ See additional coverage of the past year for students and schools: ‘12 Million Students Still Lack Reliable Internet‘ and ‘As Teens Pile on Jobs to Help Their Families, Schools Strive to Keep Tabs on Students They Haven’t Seen in a Year.’

Lead Image: Tracie Higgins and her son Mark pose outside their home in Manitowoc, Wisconsin. Mark was fined $439 for missing too many days of remote school during the pandemic. (Photographs by Dave Kasnic/The Guardian)