Falling Into the Belief Gap: What It Feels Like to Realize Your Child’s Teachers Have Sized Him Up and Dumbed Down Their Estimations 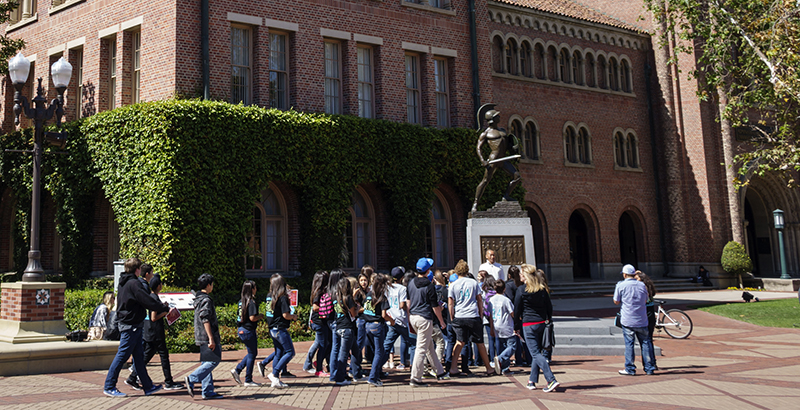 I took my younger son on his first college tour a few weeks ago. Our student guide asked after his interests and then led us through the rare-book collection, the biology lab, and the psychology department, where we passed an alarmingly large collection of hominid skulls and a locked room marked simply “Batcave.”

Did we have any questions, she asked, before heading to the student union for the all-important free meal.

“One thing,” Corey piped up. “Do you have a disability services office?”

I’m not sure what shocked me more — the fact that at 16 he made himself vulnerable enough to ask, or that the gender-studies sophomore with whom we were about to have waffles understood not just what Title IX meant for the inclusion of women on campus but also why the same principle is vital to people with disabilities.

Later, I asked Corey whether he liked the campus. “Yes,” he said. “After hearing that people like me are being successful here, I can picture myself going here.”

It’s uncanny, this tendency of people with high-functioning autism to identify and drill down into the heart of a matter that the neurotypicals — the term people with autism often use to describe the rest of us — will just chatter on about without ever precisely nailing.

Here’s the thing I want you to take away from this story: The skill of self-advocacy is crucial for everyone, but especially for young people confronted by steep challenges. For this muscle to grow, you have to believe in yourself. And for that to happen, other people have to believe in you and your innate potential.

Call it stereotype threat, implicit bias, or pity born of privilege — there is a mountain of data on how poorly students fare when the adults in their lives don’t set high bars and push them to vault them. But to parse those decades of research isn’t to understand on a gut level what it feels like to realize your teachers have sized you up and dumbed down their estimation.

My sons taught me about this belief gap. When I first started writing about education nearly 20 years ago, I would hear people talk about the importance of cultivating within schools the belief that all children can learn. This struck me as absurd. Of course educators think children can learn. Why else would they sign on for such daunting duty?

I didn’t have kids, so the idea of an educator not believing in them was an abstraction to me. As was the idea that it’s possible to care passionately about students while not truly believing in them because of the expectations you hold based on who they are.

A few years later, when I enrolled my older son, Royce, in kindergarten, the question on the table was nerve-racking, sure, yet very clear: What school would best position my baby — a blond-haired, blue-eyed boy with a vocabulary the size of Montana — for the bright future it seemed clear was his for the taking?

One school said he’d get pulled out once a week for gifted and talented services. Another suggested he could join classes in higher grades for subjects in which he was advanced. Teachers and principals fawned over him, based on nothing more objective than my claim that he was bright.

There were hiccups along the way, of course, but the essential calculus remained the same: He would have access to opportunities and be challenged at every turn. He’s away at college now, but his International Baccalaureate diploma — the one earned by 14 of the 400 members of his high school graduating class — hangs on the wall of his bedroom here at home.

His equally bright younger brother, the one who is currently plotting his own college quest? When Corey’s hiccups led to an autism diagnosis, the belief gap opened before us like a ravine.

For a number of years, most of the conversation about Corey’s education centered on managing his time. How much of it would he spend in a regular classroom, where the ability to sit still and drown out sensory overload was frequently conflated with intelligence and motivation? How much would he spend with other special education students in spaces where the pressure to be “normal” was off, but so was any expectation of academic excellence?

At a meeting at the beginning of the semester that marked our departure from Minneapolis Public Schools, I was forced to admit — despite my affection for individuals in the building — that our highly regarded neighborhood school was organized nearly entirely around the needs of adults. I asked one of Corey’s teachers why he was pulling a D in her science class if he was scoring in the 98th percentile on the end-of-year state exams. “Oh, you know,” she said, squaring up her papers, “what can you expect, given everything?”

He was pulling a D because at the slightest hint that he was frustrated, he was sent to the “resource room,” where, under the guise of social skills, he played Parcheesi. Until he was angry indeed. (So was I — and not for nothing. Not even on my oldest son’s worst day did a social worker come to my home to take notes on my personal affairs.)

One of the hardest aspects was dealing with the knowledge that many of Corey’s teachers literally lost sleep worrying about him. Unfortunately, this meant that any suggestion that he needed something different than what they were doing was received as personal criticism. They pitied him his circumstances yet refused to see that high expectations would teach him the life-changing lesson that persistence leads to mastery.

As a reporter, I saw variations on this play out in schools throughout the country. If my white son had been Native American, or a child of color, his deteriorating attitude likely would have earned him the label “defiant,” not merely “deficient.”

In a diverse city like mine, with tracts of growing poverty, if you sent all the kids who present “classroom management” issues out of the room, there wouldn’t be many occupied desks. This is a huge challenge, but one that should accrue to the adults.

But how many struggling children have parents who understand how to interpret school accountability data well enough to take the information down to the neighborhood school and swing it around like a cudgel, all the while insisting on a level of academic challenge appropriate to someone with those test scores?

A friend of mine who knows the data as well as I do is currently trying to feel her way around the wide end of this social-sorting funnel. It’s her first time playing the school lottery for her daughter, so naturally she visited the most sought-after elementary school in her prosperous corner of the city.

She asked some detailed questions about math, hoping to hear that her very small girl, who is black, could work ahead, to her current advanced ability. “Don’t worry,” the woman leading the tour said, “they’ll help her catch up.”

This was two months ago, in 2018, in a neighborhood where the desirability of the schools is one reason a house will set you back half a million dollars or more. Black Lives Matter signs are de rigueur; black residents, not so much.

Yet here’s a heavy truth: In 2017, 85 percent of that school’s tested white children were reading at grade level, while 50 percent of black students were. Math, I’m gonna need you to sit down for. Seventy-nine percent of white students passed the math test, versus 18 percent of the black children.

For students in special education, the numbers are just as bad. Only five children passed the math test, and just seven the reading. That’s schoolwide. If those numbers described achievement among kids who look like my towheaded oldest, no one would so much as pause to suggest that something was amiss among the adults.

It’s tragic when the belief gap plays out at the classroom level. But as someone whose job it is to stand in the rooms where the policies that are supposed to provide equitable academic and social opportunities are hammered out, I’m here to tell you that we have a long way to go before we walk our talk.

I don’t know if it’s the flip side of the coin of autism’s isolating social disconnection, but Corey’s brain seems a little more resistant to internalizing these low academic expectations. He was able, when I moved him to a small public charter school with a different adult belief set, to let the hurts of the past be the fault of the system he left.

He has a couple of years of high school left, though in terms of academic content we could call Corey done tomorrow. He’ll need every minute, anyhow, to backfill the soft skills he didn’t get during the early years and to pump up that self-advocacy muscle.

Me? I’m looking forward to watching him dive deeper and deeper into his intellectual and creative passions. And to many, many college tours where he gets to envision himself on campus, being successful, and enjoying the company of people who are different, and people who are like him.