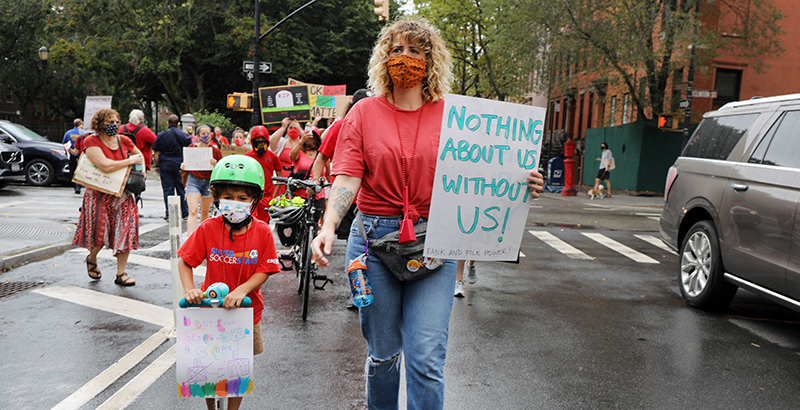 Unions make demands. Management resists demands. But what happens when the unions are management? Sometimes you get bare-knuckled, no-holds-barred brawls between bosses and employees like those currently being fought in National Education Association affiliates in Massachusetts and California.

Though they mainly represent public-sector employees, teachers unions are private enterprises with private-sector employees. In most states, these employees are themselves organized into staff unions. They negotiate contracts with their bosses, who are the elected officers and executive managers of the teachers unions.

Since these managers are in the union business, one would expect them to have positive relationships with their employees and the staff unions. In some places, they do. In others, the relationships are as hostile as any seen in the corporate world. They sometimes reach the point where staff unions go on strike or conduct other job actions against the teachers union.

The Massachusetts Teachers Association is in the midst of contentious contract negotiations with one of its unions, the Field Staff Organization, which represents 70 professional employees.

MTA executives have proposed what amounts to a two-tier salary structure, in which the starting pay for new employees would be cut by about 30 percent. The proposal would also add 12 additional steps to the salary scale, effectively increasing the amount of time it would take to reach the top.

The staff union was so appalled that it notified local MTA affiliate presidents and members, calling it an “anti-union, draconian proposal,” and asking teachers to sign a petition against it.

Calling a union anti-union is ironic, but the irony didn’t stop there.

In response, MTA executives sent their own message to affiliate presidents and members, accusing the staff union of distributing “misinformation.”

They informed the local presidents that the average staff position “costs our dues-paying members over $250,000 each year in pay and benefits,” adding that “our proposal does not touch the generous health and pension benefits, which are better than the vast majority of what our members have.”

It’s a staple of employers everywhere to highlight the generous treatment workers already get and to point out that the money they receive is derived from those who probably make a lot less. But it’s curious for a union to make that argument.

MTA didn’t stop there. Union executives sent a memo Sept. 14 to local presidents with a fact sheet on staff compensation that had quite a bit of detail.

“The starting salary is just under $107,000 and tops out at $156,759,” it reads. “Generous benefits include family medical, Rx and dental with a 90/10 split, short and long-term disability and life insurance at no cost, extensive paid sick and vacation leave, and a defined benefit pension plan with an employee contribution of only 5% of salary. Other benefits include post-retirement health, a training fund, longevity bonuses, and more.”

Salaries aren’t the only worry. “Our biggest long-term obligation is the staff retirement plan, and when we grow our staff we increase MTA’s long-term pension liability,” reads the memo. “This year alone MTA will contribute nearly $6,300,000 to fund the staff pension plan. At its current level, a full $70 of (full-time equivalent) member dues are needed to fund the pension. At the end of the most recent fiscal year, actuaries calculated that MTA’s unfunded pension liability increased from $22 million to $48 million given the pandemic and the economic downturn.”

If there’s one thing that irks MTA more than a contract dispute with the staff, it’s that members and the public can find out about it. In the memo, MTA executives complain that staffers “have also chosen to take their campaign into the public sphere of social media — where privatization forces are eager to discredit any public-sector union — potentially undermining the very heart of our shared commitment to an even stronger MTA.”

“Privatization forces” must be slumbering. You’ll search in vain for any mention of this dispute anywhere but here.

As heated as things have gotten, they began boiling last week. According to the staff union, MTA executives said their proposal would allow for the hiring of more people of color. This line of reasoning did not receive the reaction the execs were hoping for.

“We are outraged by MTA’s assertion that future staff of color are not deserving of the same starting pay or overall career earnings as their more senior, predominantly white colleagues,” replied members of the staff union’s People of Color Caucus in a letter to local presidents and members.

The caucus called MTA’s proposal “only one of many manifestations of structural racism that staff of color have experienced while working with MTA. If MTA is truly committed to dismantling white supremacy, our recommendation is that, instead of reifying institutional racism, MTA take action to ensure equal pay for people of color.”

Massachusetts isn’t the only state with disgruntled teachers union staffers. The California Teachers Association has battled its employees for months over pensions.

Last month, members of the California Staff Organization, which represents CTA’s labor negotiators, communications officers and other professionals, posted videos on Facebook concerning a CTA contract proposal that they said would cut their individual pensions by thousands of dollars each year. They also claimed CTA proposed raising the retirement age.

Apparently, CTA was just as concerned as its Massachusetts sister affiliate about these details becoming known, because soon after I posted about the videos, the staff union removed them.

CTA’s employees wanted their concerns made public, albeit briefly, but both sides have a motive to maintain secrecy about why such cuts are being considered. CTA’s employee pension plan is in “critical” condition.

Federal law requires that actuaries for union pension plans annually determine whether there are sufficient funds to pay all pension liabilities. If there are, the system is considered to be 100 percent funded.

When a plan hits critical status, the law requires corrective action. Since May, CTA has had to pay an additional 5 percent surcharge to the staff pension plan. If things do not improve, the surcharge will increase to 10 percent in subsequent years. The union must also design a “rehabilitation plan” — hence CTA management’s contract proposal for a reduction in staff retirement benefits.

According to CTA, the state and local affiliates currently contribute 38 percent of gross payroll to the staff pension plan, which is an extraordinary amount.

Benefits now being paid to 730 CTA staff retirees are inviolate, but cuts can be made to pensions based on future earnings of the union’s 534 current and past employees who are not yet receiving benefits.

The bargaining between CTA and the staff is unusual because it isn’t just a matter of compromising between competing proposals. The funding requirements of the pension plan must also be met. If the two sides cannot reach an agreement by the end of February 2021, automatic cuts will occur. Future benefits will be reduced “to the maximum extent permitted by law,” and then contributions must be increased until the plan emerges from critical status.

It’s to the benefit of the executives of the Massachusetts Teachers Association, the California Teachers Association and their respective staffs to bury the hatchet and work out their differences. The last thing they need is casual or wavering members fully aware of how their dues are being managed.