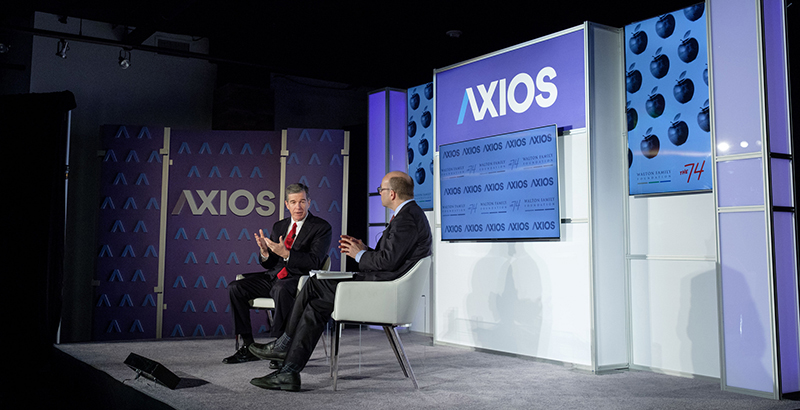 Gov. Roy Cooper (D-N.C.) speaks with Axios’s Mike Allen in Washington, D.C., on February 23. The event, “Raising the Bar: A Conversation on Education in America,” was presented by The 74 and the Walton Family Foundation. (Photo credit: Chuck Kennedy/Axios)

Gov. Roy Cooper considers himself the “chief economic development recruiter” for North Carolina. And to build the workforce of the future, he’s making a massive call for change in how his state and others treat education.

The perennial American push for job growth — and outcry against overseas outsourcing — has hovered at the top of the economic and policy agenda: cutting taxes for corporations and sweetening the pot of perks to get them to move their operations to areas that need jobs. But, according to Cooper, those might not really be the things companies care most about.

“I talk to CEOs all over the world … and the No. 1 thing they ask me is, ‘Do you have the people, do you have the workforce?’ ” Cooper told Axios’s Mike Allen last Friday in Washington, D.C. “That question comes before taxes. It comes before quality of life. It is the No. 1 question. If you do not have that workforce, they will not come.”

Cooper’s comments came at “Raising the Bar: A Conversation on Education in America,” an event moderated by Allen and presented by The 74 and the Walton Family Foundation. Govs. John Hickenlooper of Colorado and Jeff Colyer of Kansas also spoke at the town hall event.

On a personal level, Cooper said, those CEOs care most about where their children can go to school if the company relocates. But to have the quality schools, and a skilled and educated workforce to attract corporations to bring jobs, states must put dollars into education and increase teacher salaries.

“If we could treat our teachers and principals and our school support personnel like the professionals they are, recognize how critical their job is, that they are shaping the workforce for the future, that we not put them down,” Cooper told The 74 in an interview. “I can go through the whole list [of my own public school teachers], and I tell these teachers, ‘You are making a difference. I remember who they were, these kids will remember who you are in helping shape their lives, and what better way to have a positive effect.’ ”

One of the biggest mistakes states are making, Cooper said, is cutting taxes to the point that they can no longer adequately fund education. That’s what his predecessor, onetime political foe Gov. Pat McCrory, did, and Cooper criticized North Carolina for cutting individual income and corporate taxes over the past several years “at the expense of education.”

“States cannot print money. States cannot lift the debt ceiling,” he said. “We see some of the aftereffects of this in some of the Midwestern states that have decided to go this route. It is intolerable.”

On the National Assessment of Educational Progress, commonly known as the Nation’s Report Card, North Carolina students performed just slightly better than the national average in math and reading in 2015, the latest year for which data are available. North Carolina high school students graduated at a rate of 86 percent in 2016, two percentage points better than the national average of 84 percent.

But those modest educational wins over national averages aren’t translating to the workforce. North Carolina’s unemployment rate was a seasonally adjusted 4.5 percent in December, compared with the national 4.1 percent, according to the Bureau of Labor Statistics. And those figures are even more dire when broken down by educational attainment: Nationally, the unemployment rate for high school graduates with no college experience in 2016 was 4.6 percent. That rate climbs to 6.5 percent for those without a high school diploma.

And about 85 percent of the jobs that will be available in 2030 don’t even exist yet, according to a 2017 report by the Institute for the Future. Compounding that challenge in North Carolina is a gaping urban-rural divide, as well as the fact that 30 percent of children come from low-income families — and one-fifth of them have parents who aren’t working at all. So growing opportunities outside the research and financial hubs of Charlotte and the Research Triangle are key to equity and boosting the state’s economy.

Of North Carolina’s 100 counties, 13 surround the Triangle — home to major corporations like Cisco Systems, GlaxoSmithKline, and Pfizer. To the southwest, Mecklenburg County encapsulates Charlotte, home to Bank of America and Wells Fargo. Those 14 counties alone house nearly 36 percent of the entire state’s workforce, according to Bureau of Labor Statistics data.

To address these issues, Cooper launched NC Job Ready, an initiative announced earlier this month to raise workforce development to the top of North Carolina’s priorities.

This means bringing businesses together, he said, to “lower the thresholds of educational attainment” and help students, as well as those hiring, understand that two- and four-year degrees do not need to be the universal prerequisite for all types of employment — that other types of certifications can provide career opportunities. It also means working with companies to create internships and apprenticeships to learn and communicate more about what human capital businesses need.

Cooper’s subdued, collaborative “recruiter” approach is perhaps heretical in a political climate fueled by sensation and fury. Throughout his onstage discussion Friday, as well as in a subsequent backstage interview with The 74, not once did Cooper use the words “fight” or “battle” to describe the revolution he is leading on education — despite the state of political combat he’s been in, even since before his inauguration.

The Democratic former state attorney general defeated McCrory, a Republican, in 2016 by a slim 0.2 percent — just over 10,000 votes — and only after a month-long postelection stalemate, ballot recounts, and statewide acrimony over the fiercely contested race. McCrory’s one term in office was embroiled in a national firestorm over a law he signed that pulled back protections for lesbian, gay, bisexual, and transgender people. The run-up to that election was scrutinized nationwide and so heated that comedian Will Ferrell showed up to a tailgate at North Carolina State University to encourage students to vote.

And amid the charged rhetoric in the aftermath of the Florida school shooting that killed 17 people earlier this month, Cooper’s rallying cry for a crusade against firearms in schools was similarly resolute.

“I think it’s ridiculous,” Cooper said of President Trump’s proposal to offer cash bonuses to teachers who carry guns. “All options have to be on the table to prevent this senseless gun violence, and we’ve got to do something. Hopefully, hopefully, we’ll see this push to get something done. The president has said that he was going to do some things, but he said some things before that he hasn’t done, so we’ll see.”