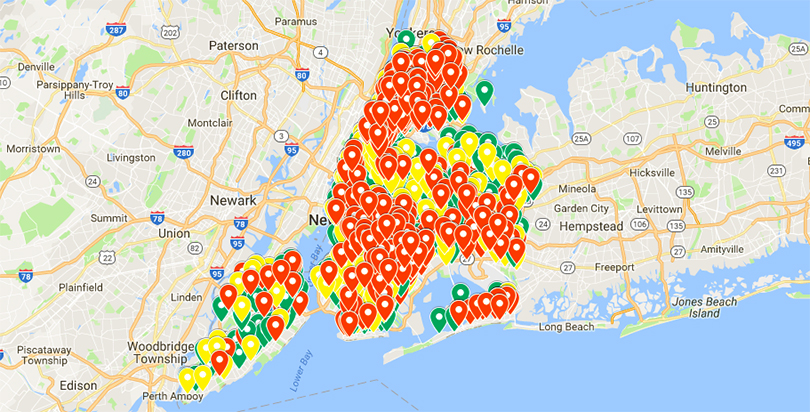 As states rethink school accountability under the Every Student Succeeds Act, policymakers often overlook information that goes to the heart of what might be the most fundamental question for any parent: Does my child feel safe?
Data about the real inner workings of schools, from teacher morale to academic culture to student safety, are rarely rated, and almost never reported.
New York City, however, conducts comprehensive school climate surveys of teachers and/or students and — unlike almost every other major district — makes the full data set available to the public.
I’ve taken a slice of the data — questions pertaining to school order and safety — and plotted the results on a public Google map so parents across the Big Apple can quickly and easily see not just what students and teachers at their schools are saying, but how those responses compare to other nearby schools.
The data reflects responses from 1,776 of more than 1,800 district and charter schools in the city that participated in surveys given in the 2015–16 school year, the most recent available. Where the information is available, the map also notes how those responses compare to answers from 2013–14, before Mayor Bill de Blasio’s school discipline reform was implemented.
Here are the city’s schools, color-coded to reflect the survey results; you can scan and zoom below, or click here for a full-screen version that you can search by address or specific school name.
To take stock of the individual survey results, click on the green, yellow, or red pin and see the pop-up window. (Click here for a full breakdown of the methodology behind the map.)
Click here to search by a specific school name or address
Since elementary school students are not surveyed, the map plots K-5 teachers’ responses to a question asking whether order and discipline are maintained at their school.
Schools where less than 15 percent of teachers said order is not maintained are labeled green/safe; schools where 15 percent to 30 percent of teachers said order is not maintained are labeled yellow/somewhat safe; schools where more than 30 percent of teachers said order wasn’t maintained are labeled red/less safe.
For middle and high schools, the map plots student responses to a question about physical fights happening at school. Schools where less than 15 percent of students said fights happen “most” or “all” of the time are labeled green/safe; schools where 15 percent to 30 percent of students reported frequent fighting are coded yellow/somewhat safe; schools where more than 30 percent of students reported frequent physical fighting are coded red/less safe.
Some schools are co-located, so multiple schools with very different levels of safety may be found within the same building.
Also, a reminder that participation for charter schools was optional. While most participated, some did not. Schools without any answers do not appear on this map.
When teachers and students say a school is less safe
Some of the least safe schools in NYC, by teacher and student reports, suffer from such bad leadership that the press has taken note.

Take, for example, Public School 269 in Flatbush, Brooklyn, which is just about the worst elementary school, according to teachers: 81 percent say order and discipline are not maintained. P.S. 269 gained some notoriety two years ago after its principal, Jazmine Santiago, used school funds to install her own private gym. One teacher told the New York Post, “She comes in early, she goes to the gym. Even when class is in session, she’s still in the gym.” One parent said, “That’s not right at all. The funds should go to helping school issues like going toward bullying campaigns.” While elementary school students aren’t asked about bullying, it seems likely that at a school where barely 1 in 5 teachers think order is maintained, bullying is quite a problem.

At Catherine & Count Basie Middle School 72 in Jamaica, Queens, 79 percent of teachers say order and discipline are not maintained. Kathy Perez is no longer one of them: She successfully sued the school for $125,000 and transferred to a new school after student misbehavior led to her hospitalization twice. Perez told the New York Post, “These kids knew they could beat on me all they wanted, and the administration would tacitly encourage it by not doing anything about it.” According to Perez, one boy ran around class swinging a collapsible cane; he was removed for several minutes, “then sent … back in — with the cane.”
Incidents like this might have something to do with the fact that 75 percent of students say physical fights happen most or all of the time. Perez also related that another boy pretended to hump his backpack, telling her, “you know you want it so drop your pants. I’m gonna give it to you hard.” Incidents like this are perhaps less shocking when you consider that 87 percent of the school’s students say their peers don’t respect each other.
Safe havens

For parents in Boerum Hill, Brooklyn, New Dawn Charter High School is the safest bet. Only 5 percent of students say they feel unsafe in the halls, compared with 26 percent at the Cobble Hill School for American Studies, 23 percent at the Boerum Hill School for International Studies, and 22 percent at Brooklyn Frontiers High School. This is particularly impressive, given that New Dawn specializes in helping students who have faced significant academic challenges and fallen behind on their credits towards obtaining a high school diploma.
Max Eden is a senior fellow at the Manhattan Institute, specializing in education policy. See a similar breakdown of schools in Los Angeles, and click here to read Eden’s analysis of lessons he learned from compiling and mapping these data.
Get the latest news about school climate and school safety, as well as access to new interactive tools that better help parents understand their neighborhood and school district, by signing up for The 74 Newsletter.
Click here to search by a specific school name or address