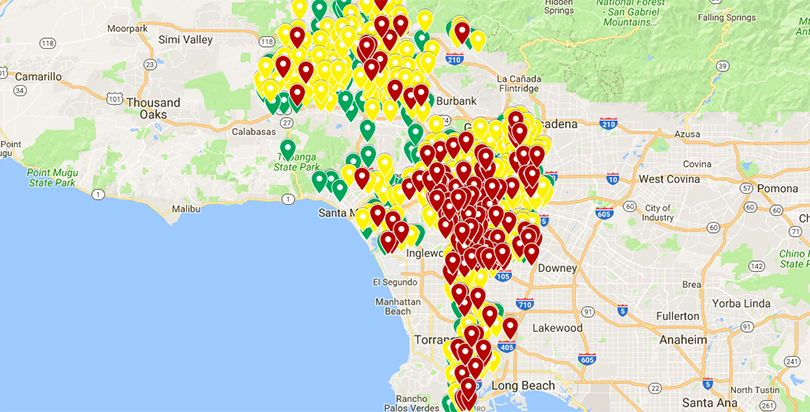 Fewer teachers at Edwin Markham Middle School believe that their discipline practices are effective than just about any other school in LAUSD: A whopping 92 percent say the way they try to handle misbehavior isn’t working. Ninety-two percent of staff also say student disrespect of teachers is a significant problem (70 percent of students admit that).
Students and teachers are also on the same page regarding bullying: 77 percent of teachers and 82 percent of students say it’s a problem. Two-thirds of students at Edwin Markham say they don’t feel safe, and given everything else, it’s unfortunately easy to imagine why.
Safe havens
In general, the differences between neighboring schools in Los Angeles are less striking than in New York City. This may be due in part to policy, or the fact that while a significant majority of charter schools in NYC participate in the climate survey, only a sliver of LA charters do so. It’s entirely possible that charters are offering a safer option for students in LA than in NYC — but unfortunately, there’s no way for parents to know whether that’s true.

Some of the most disorderly and dangerous schools in Los Angeles can be found, as sadly may not be a surprise, in Watts. When you hover over the neighborhood, however, there does appear to be one bright spot: Thomas Riley High School. It’s the safest in Watts — and it specializes in serving teenage mothers.
Max Eden is a senior fellow at the Manhattan Institute, specializing in education policy. See a similar breakdown of schools in New York City, and click here to read Max Eden’s analysis of lessons he learned from compiling and mapping these data.
Get the latest news about school climate and school safety, as well as access to new interactive tools that better help parents understand their neighborhood and school district, by signing up for The 74 Newsletter.
Click here to search by a specific school name or address