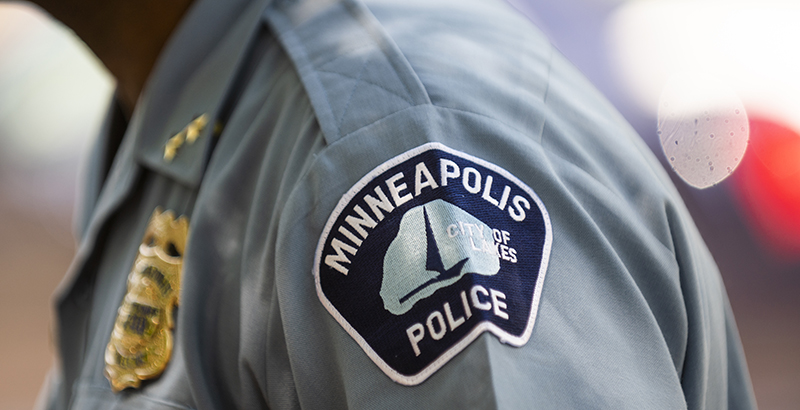 Two months after the Minneapolis school district cut ties with the city’s police department, education officials are interviewing finalists for its revamped school safety beat — and more than half have backgrounds in law enforcement, according to documents obtained by The 74.

The move has already angered racial justice activists who cheered the district’s swift decision to terminate its police contract after George Floyd’s death at the hands of a Minneapolis officer. Floyd’s May death led educators across the country to remove police from their campuses, but the Minneapolis district’s plan to replace officers with 11 “public safety support specialists” — touted as a “bridge between in-school intervention and law enforcement” — has activists worried about undoing progress made in the wake of recent protests.

“I’m afraid that they’re going to set a dangerous trend nationally, and that all these districts that have been ending contracts are going to look to Minneapolis and say, ‘Oh, we’ll just create our own internal security force,’ that will continue to perpetuate policing and criminalization,” said Maria Fernandez, senior campaign strategist at the Advancement Project, a national racial justice organization.

Among the district’s 24 finalists, at least 14 have experience as police officers, corrections officials or private security guards, according to the candidates’ résumés, which a source provided to The 74 on the condition of anonymity because they weren’t authorized to share the documents.

Six finalists have some policing experience and at least one currently works as an officer — in suburban Minneapolis. Six have served as security guards. Another eight have experience in corrections, including five who worked in the juvenile justice system and a former sheriff’s department officer who listed jailhouse weapon “shakedowns” as experience.

At the same time, more than half of the finalists currently work for the district in capacities that include special education and student discipline. The 74 is withholding the applicants’ names to protect their privacy during the interview process.

Education activist Kenneth Eban, who has worked for years to remove officers from Minneapolis schools, said he was alarmed by the share of finalists with law enforcement backgrounds.

“This is just another way of being able to police and surveil students, especially students of color,” he said. The “oversurveillance of students of color” and an adversarial campus climate would still be a problem in the district if none of the support specialists had policing backgrounds, he said, but the finalists suggest that school leaders aren’t fully committed to less punitive approaches to campus safety. “When I think about a corrections officer, I think about the terrible conditions that people who are in prison experience and how corrections officers uphold that system and that environment.”

Karen DeVet, the district’s chief operations officer, said it was important for the district to have an emergency response and security plan in place before the upcoming school year begins September 8. Despite the national uprising following Floyd’s death, she said the district is “not going to compromise on protecting our students and our staff.” However, she sought to allay fears that the district simply plans to replace school-based police with more of the same.

“These are not licensed law enforcement officials who carry guns and a toolbelt” but instead will be specialists trained to defuse conflicts before they become violent, she said. While they serve an immediate need, they’re part of a larger district effort to improve school climate. “To address those root causes of why our students and our families don’t always feel welcome, heard or seen in our schools is going to take time,” DeVet said.

The specialist position began generating controversy last month after the district released a job posting seeking applicants with degrees and experience in criminal justice capable of breaking up fights, providing security at district events and fostering “trusting, nurturing and learning environments.” The posting listed a salary range of $65,695 to $85,790. Following the community uproar, the district backtracked and said the law enforcement prerequisite was an error — and that candidates’ ability to build relationships with students was paramount.

In a Facebook post, the district said an “accelerated schedule” to ensure that the specialists are hired and receive special training before the start of the new school year “did not allow for creation of a perfect job description.”

“We did consider restarting” the hiring process, DeVet said, but after looking at applications, the district “felt like we had a really strong pool,” including educators with master’s degrees and others from the law enforcement realm with crisis experience.

The 11 specialist roles are the first part of the district’s new campus safety strategy, which officials plan to unveil at a school board meeting next week. Once hired, officials plan to station specialists at the district’s seven comprehensive high schools while the other four will support emergency response across the city. After receiving more than 100 applications and conducting interviews with more than 50 candidates, district officials, prioritizing internal candidates, settled on a top tier of two dozen finalists they said were racially diverse.

One applicant leads a youth mentorship program. Another is a military veteran who currently works at a high school where he helps teachers interact with families who have limited English speaking skills. In a cover letter, one applicant noted a career “dedicated to fostering strong social and emotional skills” among students as a key attribute and said that positive relationships are key to generating “a truly safe, inclusive and supportive school environment.”

Many of the internal candidates already work as deans assisting administrators with student discipline and campus security. Yet Marika Pfefferkorn, executive director of the Midwest Center for School Transformation and an advocate against police in Minneapolis schools, said the deans would be given more responsibilities as support specialists, including the authority to call police for backup. She accused the district of creating the positions without offering to receive community input and missing an opportunity to reimagine its approach to school safety.

“If you don’t actually change the culture of the system, you just replace who’s doing it,” she said.

The teachers union has made a similar argument. Greta Callahan, the Minneapolis Federation of Teachers president, has likened the specialists to “rent-a-cops.”

When the union called for police-free campuses, “we did not mean, ‘Hire a bunch of private security officers and put them in our buildings,’” Callahan told City Pages, a local news outlet. “Let me ask you a question. If I order a sandwich, and I say, ‘Hold the mayo,’ does that mean put a bunch of Miracle Whip all over it?’ They’re missing the point.”

One applicant, who is currently the head of security at a suburban school district, is a military police veteran who served combat missions in Iraq. Another works for a private security firm at an Amazon distribution center. A third finalist currently is employed as a corrections officer at a suburban jail where responsibilities include mediating disputes, enforcing rules and checking cells “for contraband and signs of security breaches,” according to the candidate’s résumé, which also notes training on “the impacts of trauma and institutional racism.”

Rashad Turner, executive director of the Minnesota Parent Union, said he was happy that so many of the applicants already work in education, but he also sees value in candidates with law enforcement experience coming to work for the district.

Biden’s Tough-on-Crime Mantra Led to School ‘Militarization,’ Critics Say. Why His Legacy on Campus Cops Matters and Puts Him At Odds with Progressives

“Having that familiarity with the law enforcement system, but leaving it to serve students, I’d say that could be a good thing,” said Turner, who went to college for criminal justice before losing faith in policing as a career. “To have that understanding of the injustices in the law enforcement system, I could see that being valuable” in a role centered on student discipline. He said the district’s plan to begin the upcoming academic year remotely because of the pandemic could allow additional time for the specialists to receive training that ensures that they’re “serving students’ best interests” rather than working as a “souped-up hall monitor that is targeting the students.”

Eban, the community activist, took a more aggressive stance. He said the district should restart the hiring process altogether because the job posting that sought applicants with criminal justice experience could have prompted some qualified applicants to opt out of the process.