Excerpt: An Insider’s Account of How the Charter School Idea Became a National Movement — Day One at New Jersey’s North Star Academy 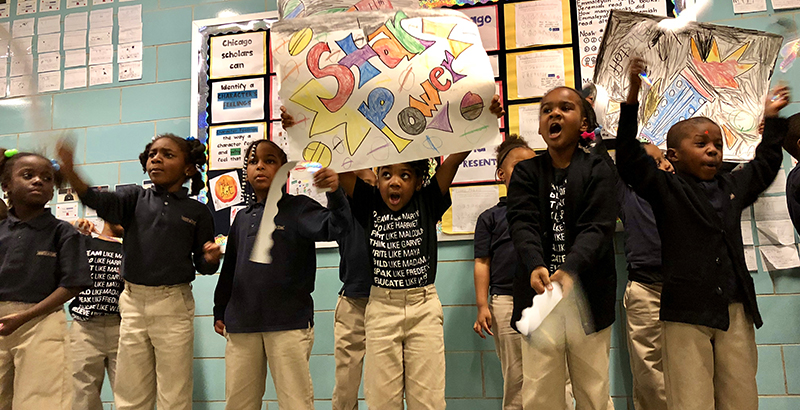 This is an excerpt from Hit the Drum: An Insider’s Account of How the Charter School Idea Became a National Movement. The new book by Sarah Tantillo tells the stories of several dozen teachers, parents and others who decided to join a grassroots movement to launch independent public schools of choice, dramatically altering the landscape of public education in America.

In September 1997, the first 13 charter schools in New Jersey opened their doors.

As the coordinator of the New Jersey Charter School Resource Center, I had spent the past year helping the schools’ founders. They had countless questions: “How do we reach out to parents? Who should be on our board? Can we turn an old factory into classrooms? How can we convince students to come? How will we bus them? What do we feed them? How can we order desks and chairs and books and pay teachers without any money up front? Can someone please give us a grant?” We had all been running at a full sprint for months.

So it was with great eagerness and curiosity that I drove to Newark to visit North Star Academy Charter School on the day it opened.

At first it didn’t seem like much. I arrived shortly before noon, and co-founder Norman Atkins — in a shirt and tie with his sleeves rolled up — stood surveying the large multi-purpose room, where 72 fifth- and sixth-graders, a sea of green polo shirts and khaki pants, sat at long fold-down tables in half of the room, eating lunch.

“We gave them cake,” Norman said with a sheepish grin, “to celebrate the birth of the school.”

He shrugged, probably sharing my thought that giving the kids so much sugar might have been a mistake. But as we looked around, no one seemed too hyped up. Several teachers, along with co-founder Jamey Verrilli, were circulating and giving students quiet directions about how to clean their tables. Each table had its own bucket and sponge.

When It Comes to Predicting Which College Students Will Actually Go On to Attain a Bachelor’s Degree, High School GPA Is King

All morning, Norman informed me, students had been in classrooms learning about the four “Core Values”: caring, respect, responsibility and justice. He showed me the one-page document that each student had received, the Core Values Pledge.

Now they were going to have their first Community Circle.

Jamey strode into the middle of the tables and raised one hand with two fingers together. He pivoted to show the sign. Within a moment, the cafeteria became hushed, then silent. Jamey praised the students’ effort for following the signal, then directed them to finish cleaning up and return to their seats. In a minute, they would have a special circle.

Moments later, the students formed a giant circle in the open half of the multi-purpose room. Then, for the next 20 minutes, while the students stood as still as they humanly could, Jamey and Norman began to lead a discussion — a discussion with lots of questions and interaction, not a lecture — with these 72 fifth- and sixth-graders about the school’s core values.

They talked about what it means to be caring (“What does it look like? Can someone give us an example?”); to show respect (“How can you tell when someone respects you? How can you tell when they don’t? What do they do?”); and to be responsible (“What kinds of things do you do at home that show you’re responsible? What kinds of things can you do — should you do — here in school to show responsibility?”).

They considered the meaning of “justice” — what it looks like, what it doesn’t look like, and what it would look like at North Star (“You have a right to get a great education, and we’re not going to let anyone interfere with that. And that also means that you cannot prevent any of your peers from learning. For example, if you disrupt class, if you take away from someone else’s opportunity to learn, if you try to prevent their star from shining, there will be consequences for that.”).

They also talked about what it means to be part of a community, how “we can all help one another so that all of our stars can shine.”

In the middle of the circle was a small folding table, and next to it was a tall djembe drum. The name of this African drum derives from a saying that translates to, “everyone gather together in peace,” and the drum is used to call people together for important ceremonies.

On this first day at North Star, no one had touched the drum yet, but from this day forward, every morning, several students would be given the honor of playing the djembe to welcome the community to join the Morning Circle.

Now Jamey, satisfied that students had a clearer idea of what was written on the Core Values Pledge, intoned the following: “We’ve talked about the Core Values; we’ve talked about what it means to be part of a community. If you choose to accept and respect these values, if you would like to be part of this community, here is what I would like you to do. One by one, I want you to come up to the table, sign this pledge which we have just talked about, put it under this drum, then hit the drum, hard, like this.”

He hit it hard. Amid his commanding silence, the PWOWW reverberated for us all to contemplate.

Then he said, “After you hit the drum, come and join the circle with the rest of us, the teachers and the other students who have chosen to be part of this community.”

One by one, each student walked up, signed the pledge, hit the drum, and returned to the circle. As we all stood there, the only sound was the loud slam of each child’s fist on the drum. PWOWW. PWOWW. PWOWW….

On the drive home, I began to wonder: How had Norman and Jamey accomplished this — so much, even on the first day? What did it take to build such a strong school culture? Could others do it? Would they? The charter school law offered a compelling opportunity: to create new schools from scratch. What other great schools would emerge, all across the country? And how might they affect other educators in the field? How might they change the field?

For me, Jamey Verrilli’s invitation to “hit the drum” became a metaphor: a call to action, an invitation to join a small but growing community of educational activists — risk-takers, hard workers, committed citizens who wanted to improve the quality of public education in cities and towns across the country. That night, I wrote in my journal: “It was a beautiful expression of hope and wisdom. These children can succeed. They will. The community they themselves are creating will hold them up. Those 72 hands that hit the drum will protect them. I hope, I hope, I hope.”

North Star became one of many schools contributing to the relentless drumbeat of reform. In its first three years of operation from 1997 to 1999, more than 900 people visited the school. And in the years that followed, thousands more.