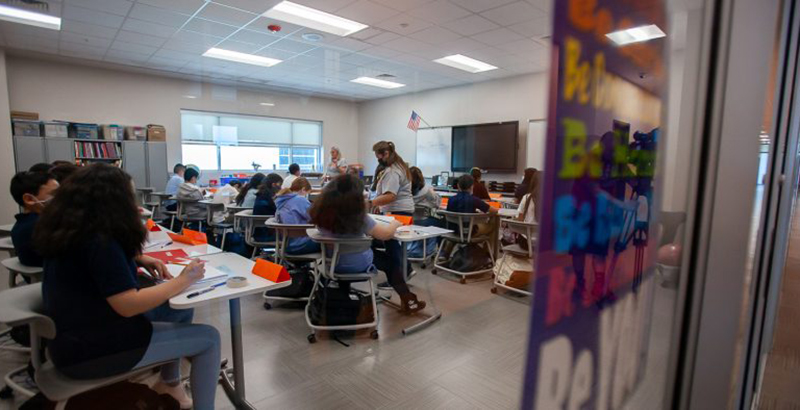 A classroom at Don Haskins PK-8 School on the first day of the 2021-2022 school year. (Corrie Boudreaux / El Paso Matters)

Where it once had the area’s highest student-teacher ratio for fifth grade classrooms, El Paso’s largest school district now has the lowest as a result of an influx of federal pandemic relief funds.

The El Paso Independent School District has set a 24-1 student-teacher ratio through the 2022-23 school year to help students get back on track after months of pandemic-related learning interruptions. It’s a popular approach nationwide as districts seek to address learning loss and spend down millions in federal relief dollars.

“Fifth grade is a turning point for (students) … it’s a transition year for them and there’s a lot that needs to be done” so they are ready for middle school the next year, she said.

Trustee Leah Hanany shared that sentiment in September when the board was briefed on the change. “I don’t think we talk about fifth grade enough,” she said. “It’s one of those weird grades where you’re still in elementary school but you’re treated for class ratios like you’re a middle or a high school student.”

Texas law caps class sizes for pre-kindergarten through fourth grade at 22 students. Districts can apply for a state waiver to exceed this, which EPISD routinely does, including again for the current school year.

There are no limits for fifth grade and above. EPISD, however, tries to maintain an average 24-1 student-teacher ratio for middle and high school, with some classrooms still falling above or below that level.

The Ysleta, Socorro and Clint districts maintain a 25-1 ratio for fifth grade and Canutillo a 28-1 ratio, according to data EPISD shared with trustees.

About a dozen of EPISD’s 170-plus fifth grade classrooms exceed 24 students, according to Steve Clay, executive director of analytics, strategy and assessment. Some principals didn’t want to break a class apart while others’ campuses simply lack space for a new classroom. A few are waiting for a new teacher to be hired.

Districts across El Paso are also struggling to staff classrooms this fall as educators retire and fewer new teachers enter the profession.

“Finding certified teachers due to the pandemic has become quite a challenge for the district,” Clay said during September’s board meeting.

The district set the new fifth grade ratio at 24 students rather than 22 because it was a level that could be covered by the federal relief dollars and was feasible to staff, Clay said in an interview this month.

Trustees have expressed support for making this ratio permanent come the 2023-24 year. That would require annually budgeting at least $1 million to cover teacher salaries, a cost that could fluctuate based on the size of the grade level. Had EPISD maintained a 24-1 ratio two years ago, it would have cost $3.5 million, according to data Clay shared with the board.

Shrinking class sizes is popular among parents and policymakers and can seem like a common sense solution to improving academic performance, said David DeMatthews, an associate professor of educational leadership and policy at the University of Texas at Austin. But the benefits can vary, often depending on a range of factors, including teacher experience, according to various studies.

Trustees have tasked district staff with tracking the impact of this year’s smaller fifth grade classes. This is something staff does annually, Clay said, and includes analyzing student growth on state standardized exams and internal assessments, attendance rates and discipline data.

The board is expected to revisit this issue in October 2022 and decide whether to continue with the 24-1 ratio once federal funds expire.

DeMatthews says something the board will need to consider is whether they have a “high-quality, well-trained teacher” in every classroom to maintain that class size.

“Districts should be prioritizing and ensuring that they’re retaining their teachers and they’re building the capacity of their teachers,” he said. “If they can do that and grow (their staff size), that’s great.”