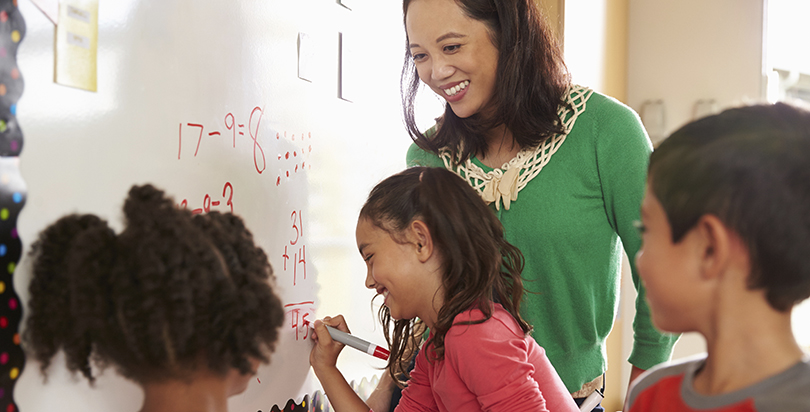 Teacher turnover and strategies for keeping teachers in the classroom are long-standing issues in education policy. A recent NPR story and a report from the Learning Policy Institute sounded alarms about the attrition of qualified instructors and discussed ways to keep teachers in school.

Teacher retention is an important issue, but to create good policy, it is important to get the facts right — and some of the conventional wisdom is off base.

1. Teachers’ turnover rates are comparable to those of similarly educated professionals, though higher than in some other professional occupations.

NPR reported that teachers’ 8 percent turnover rate is “a lot higher than other professions,” citing a graphic produced by the National Commission on Teaching and America’s Future. The graphic, which didn’t cite a source, said teachers have 15.7 percent annual turnover, compared with 11.9 percent in “other fields.” The data appears to come from a 1998 survey of attrition among “all non-teaching occupations” compared with a 2000–01 examination of teacher turnover, which combines rates at which teachers left the profession (8.4 percent) and switched schools (7.3 percent).

For a variety of methodological reasons, it’s challenging to make clean comparisons between professions, but a 2007 study found that teachers actually have turnover rates comparable to those of similarly educated professionals. The authors concluded, “Our results suggest that the average rate of teacher turnover is very close to similar professions, contrary to the conventional wisdom. It is slightly higher than that of nurses, but lower than accountants and social workers.” The same study found that teachers appear to retire at younger ages than similar professionals.

However, Richard Ingersoll, a leading researcher on teacher turnover at the University of Pennsylvania, said his work has shown that teachers do have higher attrition than some professionals, such as lawyers and architects.

2. Research does not support the idea that testing and accountability are driving a large number of teachers away.

The NPR story quoted a teacher who said she quit because “The schools are being run a little bit more like on a business model of constantly collecting data, and then [that’s] driving all of our decisions.”

No doubt, some teachers leave the profession because of the increased emphasis on data, accountability and evaluation. However, there is very little evidence that such policies have led to substantial increases in teacher turnover or burnout, with the exception of schools directly affected by accountability sanctions. Recently, a study came out showing that No Child Left Behind, often blamed for the increased focus on testing, had little effect on the rates at which teachers leave the profession.

(Read: The 74 Fact-Check: Are Teachers Really Burning Out Because of Tougher Tests and Evaluations?)

3. Most teachers who leave the classroom stay in education.

Of teachers who do leave the classroom, most do not change professions. As Stanford professor Tom Dee pointed out, less than 8 percent of teachers leave for professions outside education. In fact, the vast majority who remain in the labor force continue to work in a school or district in some capacity — as, for example, principals, instructional coaches and district administrators. This may be a good thing, insofar as accomplished teachers move up to supervise or support other educators. A large share of teachers who leave do so to retire or care for a family member.

4. Not all turnover is created equal — and some may be good.

The fact that many teachers remain in the education field doesn’t mean policymakers shouldn’t worry about turnover rates. Teacher turnover and school switching can have many costs: time and money to recruit new educators, less-effective replacement teachers, loss of institutional knowledge, and the instability caused by a churning workforce.

However, some research has found that turnover can be beneficial, as measured by student achievement. Studies in Washington, D.C., New York City, Chicago and Charlotte have shown that students benefit when less-effective teachers leave. There is also evidence that struggling teachers are especially likely to depart the profession of their own volition.

“You’d never get 100 percent retention, and you wouldn’t want it,” said Ingersoll.

5. The rate of teachers switching schools is a particular concern in high-poverty schools.

School switching can be a good thing if it improves the fit between teacher and school; however, if teachers are more likely to move out of certain schools, this could exacerbate inequities. Indeed, teachers in high-poverty schools are significantly more likely to change schools. Research in New York City has found that effective novice teachers frequently switch from a low-achieving school to a higher-achieving one.

Ensuring that schools are funded equitably and that teachers are provided pay incentives to work in high-poverty schools are potential solutions to this problem.

6. Teachers of color turn over and switch schools at higher rates than white teachers.

Research has found that teachers of color are more likely to leave the profession or change schools than their white colleagues. This is troubling in light of efforts to increase the number of teachers of color, given strong evidence that black students in particular benefit from having black teachers.

(Photo by The Shanker Institute)
The reasons for the differing turnover rates among teachers of color are not clear. Plausible hypotheses include lower rates of satisfaction, frustration with a lack of classroom autonomy,and a greater likelihood of working in high-poverty schools that have poor working conditions.

7. Teacher training is an important predictor of likelihood to stay in the classroom — but it’s not clear why.

The NPR story quotes Learning Policy Institute President Linda Darling-Hammond as saying, “Teachers who are well prepared leave at more than two times lower rates than teachers who are not fully prepared.” She seems to be referring to a recent study that found that traditionally certified teachers are significantly more likely to stay in the profession than alternatively certified teachers, who often receive substantially less training.

It’s not clear why, though. Perhaps alternatively trained teachers feel less prepared for the rigors of teaching and therefore exit at higher rates — though most evidence suggests that the two groups of teachers perform comparably. Another hypothesis is that people who choose traditional programs are more likely to stay in the classroom because they have a greater commitment to teaching or fewer career options outside the profession.

8. Retirement packages may be an important driver of teacher turnover.

Why do teachers seem to retire at relatively young ages? One hypothesis is that teachers’ pensions may incentivize earlier retirement — say, in their late 50s to early 60s. This makes sense, since the way many pensions are set up, teachers lose actuarial value, after a certain point, the longer they stay in the classroom. 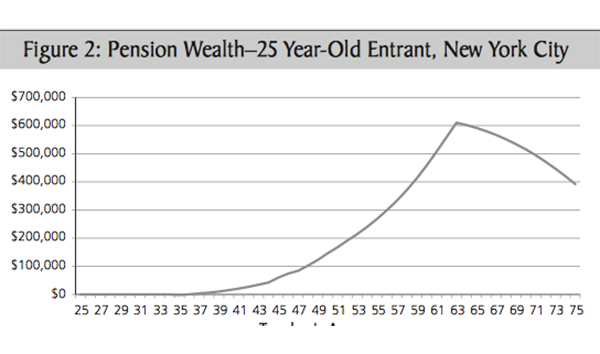 (Photo by The Manhattan Institute)

This is not necessarily a bad thing: Retirement incentives may promote healthy turnover or serve as retention incentives earlier in a teacher’s career. On the other hand, it’s not clear how effective pensions are in recruiting and retaining teachers in the first place.

The Learning Policy Institute paper called for making teacher pay more competitive but also argued against salary bumps for teachers in hard-to-staff schools and subjects, saying such initiatives “have proven largely unsuccessful when they do not also address underlying poor working conditions.”

But the existing evidence, some of which the report acknowledges, suggests that pay increases targeted by performance, or in hard-to-staff schools or subjects, can lead to improved retention.

The institute’s paper endorsed creating housing subsidies and loan repayment programs for teachers. Yet the report noted that “housing incentive programs have not yet been studied to determine whether they are effective at recruiting and retaining teachers.” Housing for teachers has also proved challenging for other reasons: The Los Angeles Times reported that one program in L.A. failed to find any teachers who qualified for subsidized housing under federal guidelines. A piece in The American Prospect noted that, even if done successfully, housing subsidies for teachers can be used as a way to crowd low-income families out of affordable housing programs.

Scholarship and student loan repayment programs have some evidence in their favor, but even one of the studies cited by the institute found that targeted salary increases are preferable: “The efficacy of direct payments to teachers appears to be more cost-effective than loan subsidies. A one-time bonus of $1,200 reduced teacher attrition more than loan repayments of comparable magnitude.”

The institute’s analysis also found that teachers who left the profession were much more likely to say that salary bumps, rather than housing subsidies or loan forgiveness, would bring them back. 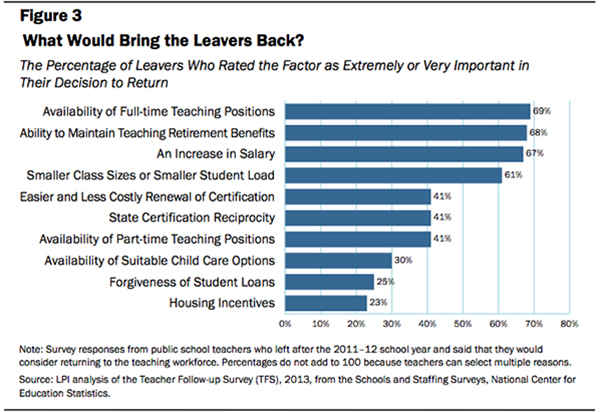 10. There is little good evidence that working conditions are more important than pay in teacher retention decisions.

Some commentators who have argued that pay is not the main driver of teacher turnover claim instead that working conditions are more important, often citing teacher survey data. It is certainly true that working conditions have a big impact on turnover, but it’s difficult to compare the two factors directly because “pay” and “working conditions” do not share a unit of measurement. It’s like asking whether a run in baseball is more valuable than a field goal in football. When surveyed, teachers may have different conceptions about what relative improvements in working conditions and pay mean.

The best way to test the working conditions–versus-salary claim is to contrast the relative cost-effectiveness of interventions to improve working conditions against those to raise teacher pay. Little if any such research seems to have been done.

The role of leadership — the school’s principal — seems to be a particularly crucial driver in whether teachers leave. Research has found that teachers’ opinions of their principals directly affect turnover; another recent study found that leadership actually alters teachers’ perception of the whole school environment. However, improving principal quality is a sometimes perplexing issue that has received much less research than efforts to better the teaching workforce.

Another important factor is teacher autonomy. Studies examining math teachers and teachers in low-performing schools have shown that the degree to which teachers feel they have freedom in their own classrooms is a strong predictor of attrition rates.