Eden: New Data Say Minority Kids Actually Are Underrepresented in Special Ed. DeVos Is Right to Change Rule That Keeps Them From Getting Help 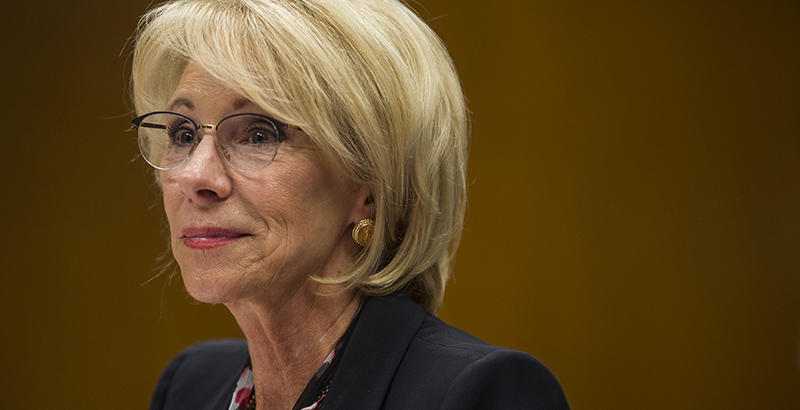 Parents of students of color with disabilities should be grateful that, unlike her predecessors, Secretary of Education Betsy DeVos prioritizes evidence over ideology. Two days before President Barack Obama left office, his Department of Education issued a regulation that would have systematically pressured school districts to deny minority students their rights. But fortunately, after delaying the regulation to study the issue further, and despite a setback from the courts, DeVos appears poised to defang the deeply misguided Equity in Individuals with Disabilities Education (IDEA) regulation.

Equity in IDEA is intended to solve the “problem” of minority overrepresentation in special education. African-American students, for example, represent 16 percent of students overall but 21 percent of the special education student population. Civil rights advocates were convinced that this overrepresentation was a product of institutional racism.

In response to this perceived problem, Equity in IDEA requires states to establish a standard statistical methodology for identifying “significant disproportionality” in special education identification rates, classroom placement and discipline by race or ethnicity. If a school district shows significant overrepresentation, then — regardless of whether there is any finding that adults are making biased decisions — the school district would be publicly labeled as having significant disproportionality and forced to reallocate 15 percent of its IDEA Part B federal funding to early interventions intended to produce greater statistical parity.

But the empirical argument that minority students are overrepresented was based on largely descriptive studies that examined district-level data without controlling for student or family characteristics. Given that black students are disproportionately raised in single-parent homes, in distressed communities, and are subject to greater negative health factors, it’s not at all clear why we should expect them to be diagnosed at an identical rate as white or Asian students.

As Penn State professor Paul Morgan said, “you don’t hear a statistic like ‘minority students are twice as likely to have asthma’ and automatically conclude that pediatricians are racially biased.” Rather, you would hope that every student who has asthma gets the proper diagnosis. And you certainly would not promulgate a national regulation pressuring hospitals to prescribe fewer inhalers to minority children.

Morgan and his colleagues published multiple studies, in 2010, 2012, 2013 and 2014, that used more robust data sources such as national surveys to apply more rigorous statistical controls, and consistently found that minority students were actually less likely to be diagnosed with a disability than their similarly situated white peers.

These findings went broadly unremarked upon in the education policy community until Morgan and his co-author George Farkas published their 2015 study finding broad underrepresentation, along with a New York Times op-ed titled “Is Special Education Racist?”

This study received harsh criticism from academics such as Kevin Welner and Russell Skiba, who accused Morgan et al. of “suspicious procedures and questionable interpretations.” But these academics understood the potential gravity of Morgan’s results, and they noted that “if these findings were to hold up, it would have serious practical consequences — it would mean that almost 20 years of federal policy, based on the evidence of overrepresentation of students of color, was just plain wrong.”

The policy implications of these findings are profound. The Obama-era regulation was based on a diagnosis that is almost certainly the opposite of the truth. It would pressure school districts to further underserve already underserved students of color, or else be forced to sacrifice other educational priorities in order to decrease disability identification. Rather than take the long route, however, it seems inevitable that many districts would decrease identification by establishing implicit quotas by pressuring their staff to deny students services on the basis of race.

How many school districts would face this pressure? A 2016 Department of Education analysis projected that 47 percent of school districts would run afoul of this regulation in some category. The final number will almost certainly be far lower than this, given that many states have established looser formulas than the one on which that study was based. But one district facing pressure to deprive students of color their rights is one too many.

Fortunately, shortly after Morgan’s 2017 study provided further evidence that the empirical rationale of this regulation was fundamentally wrong, DeVos moved to delay implementation pending further review. Unfortunately, earlier this spring, a judge ruled against her delay and ordered her to enforce the regulation. But, bolstered by further evidence from Elder’s study, DeVos has posted notice that her department will revise the regulation later this year.

This will all create a major bureaucratic headache and be the source of substantial confusion for state education agencies and district special-education service coordinators. Even a temporary implementation of this regulation will send out a signal that schools should be on guard against overrepresentation, which could lead to students of color being denied services that would likely help increase their academic achievement. What’s worse, self-described civil rights activists and progressive politicians will almost certainly continue to demagogue against Betsy DeVos on this issue and argue that by rolling back this regulation, she is endorsing institutional racism.

Before the next school year starts, DeVos should send out a Dear Colleague letter spelling out the most recent and rigorous research and explaining its policy ramifications. State education agencies that have not yet finalized their formulas should be encouraged to set their threshold so high that no school district runs afoul of it; district leaders should be advised to disregard notices that their schools are plagued by “significant disproportionality”; and school leaders should be cautioned against the assumption that aggregate statistical differences are evidence of “overrepresentation.”

All in all, this regulation is a case study in the perils of disparity-based policymaking and in the error of making sweeping changes based on statistics that regulators fundamentally don’t understand. And, although she probably won’t receive it, DeVos deserves great credit from the evidence-based policy community for taking time to study this issue and changing course.

Medema and Pankovits: A Wrench in the Works — How Schools Can Keep the Coronavirus Pandemic From Derailing Their Construction Projects