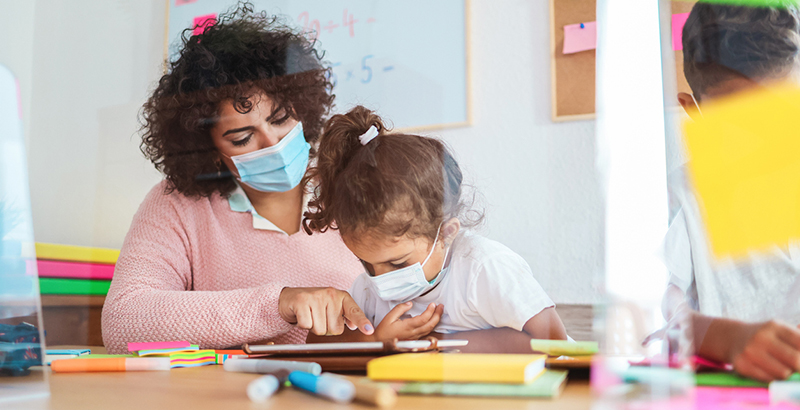 Get essential education news and commentary delivered straight to your inbox. Sign up here for The 74’s daily newsletter. | Correction appended.

In the 1990s, Cyndie Osborne was an early childhood teacher — a job she could stick with, she said, because of wage supplements that offset the financial struggles that came with the work.

Without those supplements, Osborne said, she doesn’t know whether she would have stayed in the field — becoming a director, a community college instructor, and president of NC ACCESS, a state chapter of a national group of early childhood faculty in community colleges.

This week, Osborne joined a group of early educators, directors, and advocates knocking on North Carolina House members’ office doors to advocate for early education budget items, including expansion of those same wage supplements through the Child Care WAGE$ program.

“Here I am today educating other teachers and trying to help them remain in the field,” Osborne said Tuesday between office visits at the Legislative Building. “I just think it’s so important.

“We can’t do it overnight. The system has got to change, but in the meantime, WAGE$ will support those teachers remaining in the field.”

Early childhood teachers especially need higher pay, the advocates said, after more than a year of serving young children and families through the pandemic, often also serving school-age children with working parents who needed a place to go during remote learning.

“We’ve been working since March, risking our lives working with children each and every day, and families and teachers,” said Cassandra Brooks, owner and director Little Believer’s Academy, a child care program with one location in Garner and one in Clayton.

“Many of my teachers got COVID, and they need a pay increase. And guess what? You can go and work at the grocery store and make more money than you do in child care. Why is that?”

Organized by the NC Early Education coalition, the group of about 30 people aimed to contact every House member and some senators to promote two main budget priorities:

— The inclusion in the budget of House Bill 574, which would adopt a statewide floor for the state’s child care subsidy program. Read more here about what a subsidy floor would mean for the state’s child care providers that serve families through the program. The rates providers receive to participate are largely based on what parents privately paying for child care in the area can afford, leading to large differences in funding across the state. The bill would allocate $64 million in recurring funds in 2021-22 and $72 million in recurring funds in 2022-23.

The Senate’s budget plan, proposed and passed in June, did not include either of these items.

When it comes to early education, the Senate proposal would instead allocate $15 million in nonrecurring funds in each year of the biennium for Smart Start, the statewide network of local partnerships that provide early childhood services and administer funds based on communities’ needs. The proposal also includes $5.2 million in recurring funds over the biennium to increase the NC Pre-K reimbursement rates that child care centers receive, as well as $20 million in nonrecurring money for capital and start-up costs related to NC Pre-K.

The Senate proposal also would provide $503 million to reduce the child care subsidy waitlist, prioritizing children in foster care; to continue to cover parent co-pays for the rest of this year; and to award staff bonuses based on the amount of time a teacher has worked at the facility. These are federal funds from the American Rescue Plan (ARP), which includes $1.3 billion in nonrecurring funds for child care investments.

“We have a historic opportunity, not only with federal relief dollars, but we also have a record surplus,” Nelson said. “When we invest in our youngest children, it leads to amazing outcomes for our communities. It leads to children who are happy, who are prepared for school, who are able to read by the third grade, which is a big goal for North Carolina.”

Advocates emphasized the benefits of child care on parents’ ability to work and on the state’s overall economic growth.

“If we don’t have anyone to watch our kids, how are we going to work?” said Kelly Dulin, a mother of two, former early childhood teacher, and soon-to-be center director in Iredell County. “Our voice matters,” Dulin said. “They need to know how we feel in the field.”

Brooks, the director of centers in Garner and Clayton, said she is “past hopeful.”

“We need funding now,” Brooks said. “We didn’t come here to take the day off of work, for nothing, and not keeping our children. We need money.”

Correction: A previous version of this article misstated the total allocations included in House Bill 574.

Liz Bell is the early childhood reporter for EducationNC.