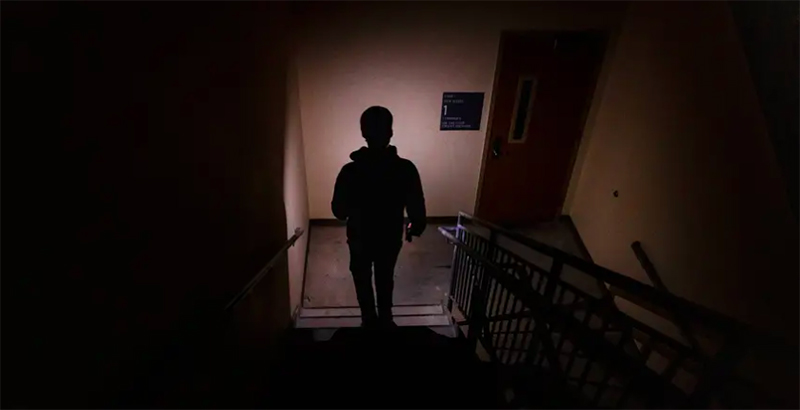 Nicholas Ware, a freshman computer science major at Texas State University, walks down the stairs to his dorm room on campus, which has been without consistent power for days. (Jordan Vonderhaar / The Texas Tribune)

At first, the snow was exciting, ethereal, dreamy, said college students who bundled up Sunday night to play like children in the unusual Texas snowstorm.

Then, the power went out. Pipes burst. Toilets stopped working. Food and water became scarce. The winter wonderland had transformed into a frozen hellscape.

Four days after nearly a week of freezing temperatures, snow and ice left millions without power and even more struggling to access drinkable water, college students living on campuses across the state said they’re struggling to get basic necessities. While some campuses have slowly regained power over the past 24 hours, many dorms still lack access to consistent water and food.

“I feel like I’m in hell, like I’m in prison,” said Texas State University freshman Nicholas Ware, who spent three days without heat and power until Wednesday evening. He’s been living off two meals provided each day by the university and some chips he purchased from a gas station. He hasn’t taken a shower since Sunday due to a lack of hot water and electricity in the shared bathrooms.

“When you’re in here all the lights are off, there’s no air, you can hear every movement in the building being made,” he said. “You can’t talk to too many people cause you don’t want your phone to die…Sleeping is like the one thing you can do.”

Universities have tried to provide students with food and shelter, opening warming centers in campus buildings and providing to-go meals from dining halls. But many are battling dwindling food supplies, staffing shortages as employees struggle to get to work, lack of water and power outages. The situation is particularly challenging for students in large residence halls unable to see their families or access supplies like extra clothing, food or a car.

Unstable cell service and the internet made it difficult for universities to update students with the latest information, said University of North Texas student Lexi Bednar.

“It was kind of like a huge scramble of everybody being like, ‘what’s going on?” she said.

Ánh Adams, another freshman at Texas State, was forced to evacuate her dorm Monday morning after a pipe burst on the floor above her. She and dozens of other students spent hours in the lobby of another residence hall before she was relocated to a residence hall that doesn’t have heat or internet access. She grabbed all the food in her dorm room and a heated blanket. She also quickly crocheted herself a fluffy, white hat to stay warm. It’s still unclear when she’ll be able to return to her room.

Other students have moved around the San Marcos campus chasing electricity to stay warm and charge their phones, including Adalia Williams, another Texas State freshman. Her Ugg boots —the only warm shoes she has with her — are wearing down from all the wet snow and she’s running out of warm clothes because laundry is limited. She said it’s difficult to access her eighth story dorm room because the stairwells are outside and covered in ice and the elevators were broken even before the storm hit. Texas State officials did not return a request for comment.

When Williams’ toilet broke Monday, she was forced to use a cup in an emergency. But she said the biggest struggle continues to be finding food. She said lines for to-go meals at the two campus dining halls are too long to wait out in the cold. Nearby restaurants are closed and the shelves are empty at gas stations and grocery stores. 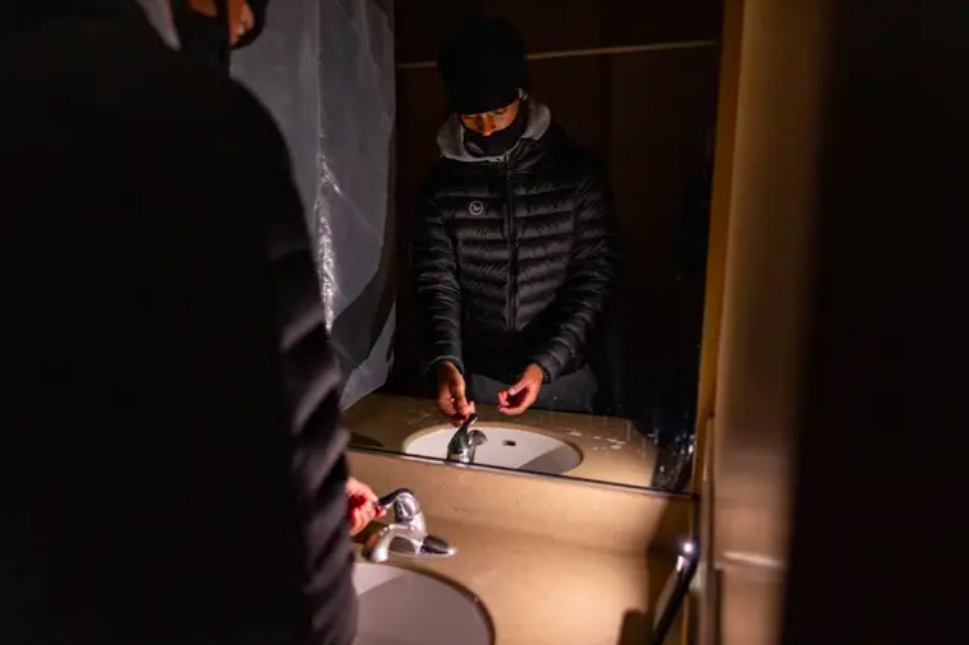 Nicholas Ware washes his hands in a dark bathroom using the flashlight on his phone on Wednesday. (Jordan Vonderhaar / The Texas Tribune) 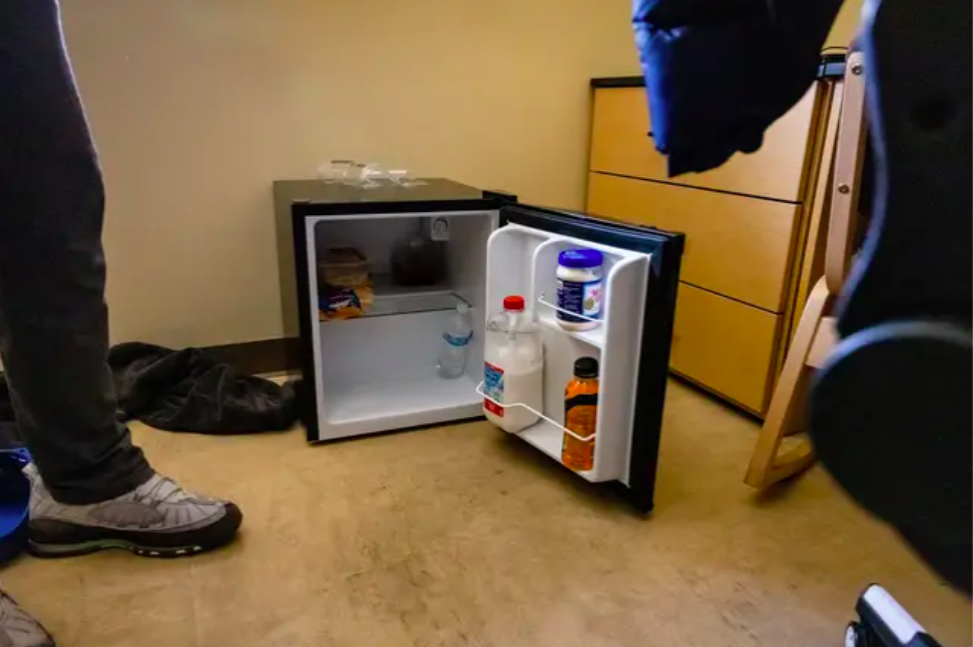 Ware was entirely unprepared with groceries for the massive winter storm that hit Texas. (Jordan Vonderhaar / The Texas Tribune)

“It’s pretty much small things like sunflower seeds and peanuts,” Williams said, describing the slim options available at a nearby Buc-ee’s gas station. “We’re grateful for anything, but you know, that’s not really gonna fill us up.”

At one point Williams and some friends drove to nearby Kyle, a city north of San Marcos, to find food, and ended up waiting at a Jersey Mike’s for two hours because the restaurant ran out of bread and needed to make more.

At Sam Houston State University in Huntsville, students have been without water, which has limited their access to toilets. Freshman Bryce Sidney said students had to walk to the student center nearby to use the bathroom.

“I usually make a trip and like to plan it out,” Sidney said. “It’s like ‘okay, I’m gonna go get my meal for lunch or dinner and then I’m gonna swing by the student center and come back to my dorm.”

On Thursday, the school secured portable toilets for students to use, placing them outside the residence hall. They still expect another bout of freezing rain tonight.

Sidney said his residence hall already experienced bursting water pipes, though he didn’t have to relocate. He hasn’t taken a shower since Sunday and has been brushing his teeth using water he collected in a bowl in his dorm room. University officials did not return a request for comment.

Some Texas students living off campus are facing different challenges as they’re forced to fend for themselves without the help of parents or university administrators. Texas A&M University said they are only serving meals to students who live on campus, leaving students in off-campus apartments to find food elsewhere. Officials did not respond to questions.

Meanwhile, some students in off campus housing who are experiencing power and water issues have struggled to get answers and assistance from apartment management companies.

Aggie roommates Cameron Herring and Andrew Gonzales said they were forced to relocate to a hotel after a pipe burst in their off campus apartment, Callaway Villas, damaging more than 60 units. They said the apartment complex has not helped students relocate or offered to prorate rent, despite the uninhabitable conditions. When Herring posted questions asking for help on a private Facebook group hosted by the building managers, he said the post was removed and settings were changed so students couldn’t post anymore without the building manager’s approval.

“We can understand the pipes flood and they freeze. And it’s not necessarily their fault,” Herring said. “But it’s just frustrating that they just kind of left us in the dark, and then like, deleting our posts at a time like this? Like, really?”

Herring provided screenshots to the Tribune showing his posts were no longer visible.

Management at the apartment complex did not respond to requests for comment.

As the days wear on, students on campus at Texas A&M say some residence hall conditions are descending into chaos as students continue to go stir crazy and more off campus residents have shown up to access heat, power and water. Junior Matt Austin said common areas and hallways have been filled with garbage, ovens and microwaves have been broken and furniture mistreated as icy road conditions have made it difficult for custodial staff to come to campus. Regular college antics, like loud students running up and down hallways, have escalated.

But the most concerning issue he’s noticed is as students try to push through this crisis, their diligence against the COVID-19 pandemic has waned.

“This has made people forget about COVID precautions because I would definitely say that like mask usage is way down,” he said. “People have just assumed that that’s not something they need to worry about right now.”