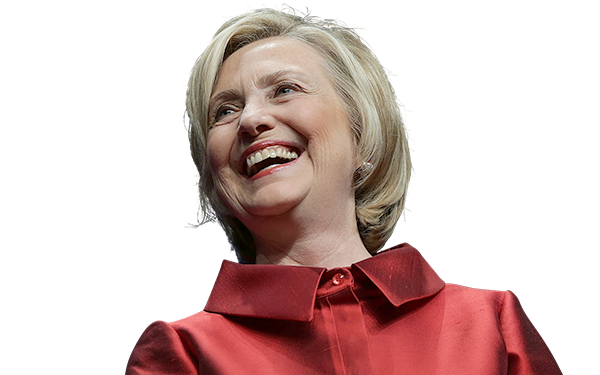 The American Federation for Teachers came out swinging on behalf of Hillary Clinton on Saturday, with a glowing endorsement for the Democratic presidential nomination that hailed Clinton as a “tested leader who shares our values, is supported by our members, and is prepared for a tough fight on behalf of students, families and communities.” She’s a Senator who “fought for education funding and workers' rights and defended public service workers who came to our nation's defense on Sept. 11”, the AFT said, and a public school alum who “believes in the promise of public education.” (Read the full release)
As the first major union to back a 2016 candidate in either party, it was the timing of the endorsement that proved most notable to those in the political establishment, giving Clinton crucial campaign momentum at a time when Senator Bernie Sanders is rising in the polls. In its coverage of the endorsement, the New York Times was quick to note that serendipity: “The union is giving her its support again at an opportune moment for Mrs. Clinton, just before her first major speech on the economy, scheduled for Monday, which is seen as an attempt, in part, to neutralize the criticism leveled at her by her leading challenger.”
In more practical terms, the endorsement also means votes. A lot of votes. “As in past elections, the AFT's 1.6 million members will be a powerful organizing force behind our endorsed candidate,” the union boasted in its announcement. 1.6 million ballots that Clinton can depend on.
Or maybe not.
In the hours and days following the announcement, a notable wave of backlash swept across the social web in the form of angry tweets, outraged Facebook comments (indeed, it’s rather difficult to find positive comments on the official AFT endorsement post on Facebook) and a Change.org petition that protested the endorsement, citing Clinton’s record of supporting charter schools as well as her support of tying teacher pay to student test scores.
The petition also pointedly adds that other candidates, such as Sanders, are more sympathetic and attuned to teachers’ needs and, therefore, more deserving of the AFT’s praise. “Bernie Sanders is a product of public education and wants to help teachers teach in a holistic way, not just teach toward a test,” it states. As of press time late morning Monday, the form had secured more than 3,100 supporters.
In apparent response to the uproar, the AFT quickly circulated the methodology and results behind its membership poll:

Here’s the memo from our pollster—Hart Research, one of top firms in US—on their findings of our member poll http://t.co/mhIt9HfpVQ

But the AFT’s online following was not completely satisfied. Consider these comments from its Facebook page, slamming the endorsement: 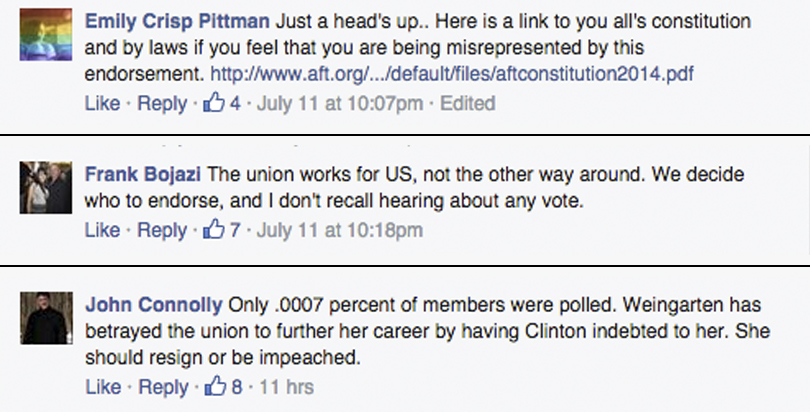 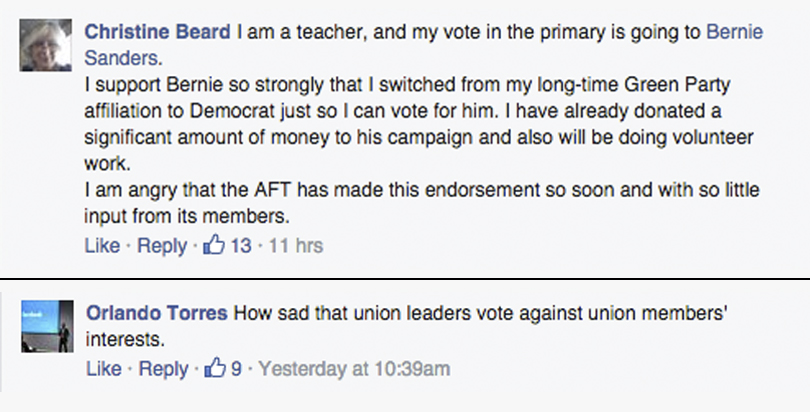 Similarly, a stream of frustrated reactions from educators started circulating on Twitter:

Did Hillary give a specific education platform? What is her position on testing, evals, charters, CC? @rweingarten

@HillaryClinton @rweingarten @AFTunion Shame on AFT. If you support anybody, it should be @SenSanders

Exactly who did the @aft poll before endorsing Hillary? The Kardashians?

.@HillaryClinton can stand with @AFTunion. I’m standing with the kids. #edreform http://t.co/ORra89R4nu

Meanwhile, on Change.org, here's a Monday morning shapshot of where the petition stands: 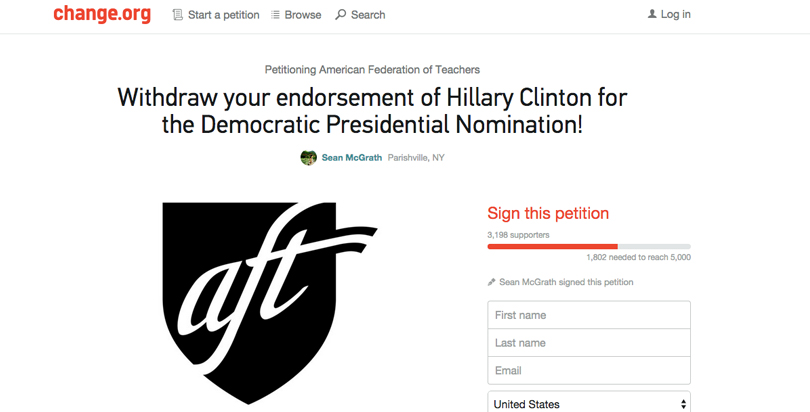