The boy was spending more and more time in a segregated classroom. Cotton began trying — politely but persistently — to get him into a mainstream class for most of the day and, for a few hours a week, gifted and talented services. She felt as if she was getting the runaround.

“I’ve always had this unshakeable conviction that my son [eventually] would be mainstreamed” — included in a regular classroom — she says. “Sure, he’s quirky, but so is everyone in the family.” 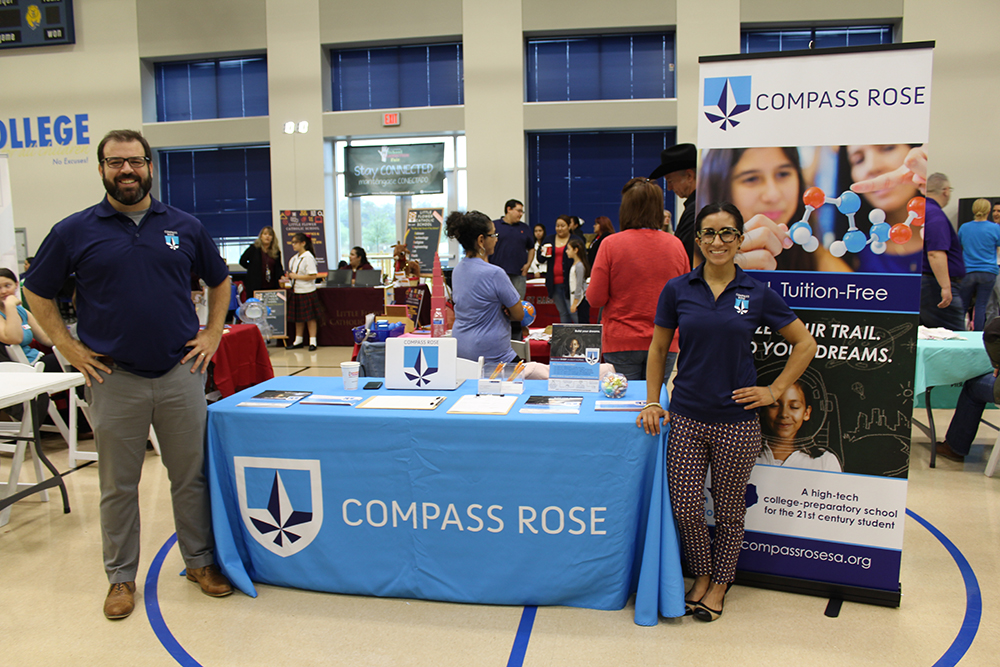 Compass Rose is a high-tech charter school slated to open in San Antonio in August.
Photo: Families Empowered
The importance of starting out strong
For a startup, the charter school funding hurdle can feel insurmountable. Paul Morrissey is the executive director of Compass Rose, a high-tech charter school slated to open in August that is working to find a campus. The program is one of just two Texas charters approved last year. It has authority to open three schools over the next five years — provided Morrissey can find the money.
(The 74: As Political Winds Shift in Texas, Charter Advocates Plan 2017 Push for Funds to Build New Schools)
Morrissey had a hard time locating a landlord willing to take a chance on renting to Compass Rose. The school will enroll only sixth-graders its first year, adding a grade every year until its first class graduates high school.
That means its first year the school will get just a sliver of the state funding it will eventually receive. Without the total amount of state tuition funding the school will receive when it’s fully enrolled, Compass Rose won’t be able to afford the renovations to create a school that can accommodate six grades of students. So a landlord must allow it to grow piecemeal.
“It’s threading a needle while riding a horse,” says Morrissey, who has experience both opening new schools and attempting to turn around a traditional district school. “It’s all about how you start in the charter world. Unless you start strong…”
As the sentence trails off, Morrissey shakes his head. Starting strong means delivering the kinds of outcomes even before the first-year test scores are in that will convince families Compass Rose is a good alternative to the existing charter schools where their children are wait-listed. It’s a tough act, especially on a shoestring.
As the legislature convened in January, it was clear the unlikely coalition of parents had gotten Straus’s attention and that of other key lawmakers. Policy aides were taking notes instead of nodding politely. Lawmakers in both chambers have visited schools and sought out parents.
It’s less clear that appropriating money for charter schools in Texas — particularly while oil prices are low — is a feat even a newly sympathetic speaker can pull off.
But with 20 percent to 25 percent of kids in Texas’s largest cities, nearly 400,000 students, either enrolled in a charter school or on a wait list, education advocates see the state’s unusual political landscape starting to change. Demand is thought to be moving Democrats, who traditionally viewed charter schools as a threat to teachers unions, to soften their opposition.
It’s not unusual for an urban Senate district, for example, to be home to 15,000 parents and for 10,000 of them to have wait-listed kids, according to education policy advocates. Much smaller House districts are a harder nut for charter school expansion proponents to crack. In many, the traditional school district is a major employer and doesn’t welcome the competition. The gatekeeper in the House, Straus will need Senate members to compromise on other priorities, which advocates speculate could push him to cede to senators’ wishes on the charter funding issue.
(The 74: Texas GOP Primes for New Voucher Battle, as State’s Top Elected Officials Prioritize School Choice Bill)
A bill to provide charter schools with $700 per pupil in state facilities aid has been introduced in the Senate. The funding would cut the $1,400 gap between charters and their better-funded district counterparts by half.
District by district, wait-listed parents are making the trip to Austin. And they’re reporting back that the reception is warmer than in years past.
Says Shree Medlock: “Parents are bulldogs, once they know.”