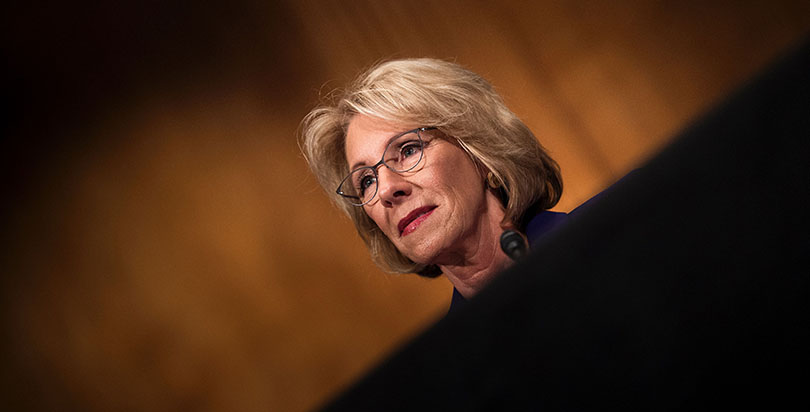 Before the sexual assault, the Pennsylvania teenager served on her high school’s student council and competed on the debate team. After the off-campus attack by a fellow student — for which she faced repeated harassment at school — everything changed. She reported the attack to school officials, to no avail; her grades dropped; she withdrew from leadership positions and, ultimately, enrolled in an online school to escape.

That’s one of the stories Education Secretary Betsy DeVos heard Thursday during three 90-minute “listening sessions” in Washington about student sexual assault. Though the meetings were geared largely toward sexual violence on college campuses, K-12 student victims were also addressed.

“I think what we’ve seen time and time again is, schools’ failure to address harassment and assault is pushing students out of school,” said Neena Chaudhry, senior counsel and director of education at the National Women’s Law Center, who invited the student to attend Thursday’s meeting with DeVos. The student, whose name was not released, “really encouraged the secretary to enforce the law, that it’s really important that high schools, K-12 schools understand their responsibilities.”

The sessions came at a moment of uncertainty for sexual assault survivors under President Trump’s Education Department, which is considering rescinding Obama-era rules that require schools to use a “preponderance of the evidence” standard in disciplinary hearings in cases of rape and sexual harassment.

Advocates for sexual assault victims say that guidance is crucial for cracking down on incidents in schools, but critics have argued — and sued — over the policy, which they say tramples accused students’ due-process rights.

The three listening sessions were “to discuss the impact of the department’s Title IX sexual assault guidance on students, families, and institutions,” according to a news release. DeVos and Candice Jackson, acting head of the department’s Office for Civil Rights, met individually with “survivors of sexual violence,” “students who have been falsely accused and disciplined under Title IX,” and “representatives of educational institutions and subject matter experts.” The sessions were closed to the press.

“Everybody talked about the guidance and how necessary it is, but how schools, even with that guidance, have a long way to go,” Chaudhry said. “A lot of schools aren’t getting it right, so what’s needed is more support and technical assistance and resources for schools to really understand how to do it right, not changing the guidance or changing policies.”

Chris Perry, deputy executive director of Stop Abusive and Violent Environments, told The 74 he felt optimistic following his session with DeVos. At the meeting, Perry said, was a college student who was accused of verbal sexual harassment and suspended without a hearing three weeks before graduation. Perry said the accusation was fabricated.

He said his group doesn’t want to roll back student civil rights; rather, it hopes the department will replace the current guidelines with procedures similar to recent recommendations from the American Bar Association.

"What we’re trying to do is really put together a fair system that allows both parties to feel as though they were treated respectfully and that the outcome is reliable,” Perry said. “We want a full and fair investigation, we want both sides to be able to have adequate and timely notice of what’s going on, we would like a transparent hearing process.”

DeVos didn’t indicate in the meeting how she plans to proceed, he said.

In a New York Times article Wednesday, Jackson said the process for investigating student sexual violence allegations has not been “fairly balanced between the accused victim and the accused student,” and that some students have been unfairly implicated.

“The accusations — 90 percent of them — fall into the category of ‘we were both drunk, we broke up, and six months later I found myself under a Title IX investigation because she just decided that our last sleeping together was not quite right,’ ” Jackson told the newspaper. After coming under fire for the comments, she issued an apology and called her statements “flippant.”

In an interview with The 74 last month, Catherine Lhamon, the department’s assistant secretary for civil rights under then-President Barack Obama, said that “preponderance of the evidence” “is the standard that the vast majority of the schools that had identified a standard in advance were already using.”

"That’s because it is the standard that the Supreme Court has identified, that lower courts have identified, and is the typical standard to balance benefits and burdens among a complainant and the accused person in that context,” she said. In addressing a surge in Title IX complaints on college campuses and in K-12 schools in recent years, Lhamon pointed to greater information about the civil rights division as an avenue for relief.

In a letter to DeVos on Thursday, 36 civil rights groups — including the NAACP Legal Defense and Educational Fund, the Gay, Lesbian and Straight Education Network, and the American Federation of Teachers — urged her to maintain existing Title IX guidance to “ensure that students are not discriminated against based on sex in school.”

“As advocates for civil rights, including women’s rights, racial justice, disability rights, LGBTQ rights, and immigrants’ rights, we know that such discrimination continues to deny students equal access to education at all levels,” the letter said. “We urge the department to continue helping schools understand their legal obligations — for example, by reiterating its continued support for existing guidance letters.”

One student who participated in Thursday’s listening session, 20-year-old Taylor Moore, said she was sexually assaulted by her boyfriend’s roommate during her first semester at Southern Arkansas University, which is now under investigation by the department for its handling of her report of sexual violence. During Thursday’s meeting, Moore said that while Jackson commended survivors for sharing their stories, DeVos remained mostly silent.

Laura Dunn, founder and executive director of SurvJustice, which filed the Title IX complaint on Moore’s behalf, said she left the meeting with more cause for concern under the new administration.

“We were just in that meeting, but we know coming after us, it’s not just due-process advocates — who I have no problem with, because I think due process is important to any system of justice — but there’s men’s rights advocates who literally think women lie about rape and they themselves perpetuate rape myths to block enforcement,” she said. “To not say enough to us after that meeting and knowing who’s coming in next, it does make me feel like whatever comes out of the department, I’m less optimistic it’ll be to advance the rights of survivors.”