By Corey A. DeAngelis and Christian Barnard | February 2, 2020 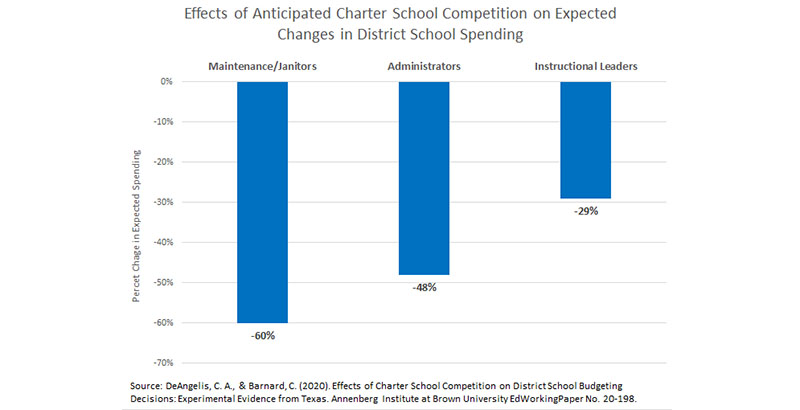 Democratic presidential hopeful Sen. Elizabeth Warren recently argued that families should make their traditional public schools better instead of fleeing to charter schools. However, a growing body of literature suggests that having an exit option can actually improve traditional public schools through competitive pressures. A 2019 meta-analysis of this evidence finds that school choice competition generally increases academic achievement for students who remain in district-run public schools.

But what exactly are district schools doing to boost results in response to competition?

Surprisingly little research exists on this topic. To our knowledge, zero random assignment studies have examined the effects of school choice competition on specific practices in district-run public schools.

However, our new study — just released at the Annenberg Institute at Brown University — does just that.

We conducted a survey experiment of Texas public school leaders in the 2019-20 school year. We randomly assigned a note to two questions telling school leaders in the treatment group to imagine that a new public charter school is opening in their district next year. By observing differences in survey responses between our control and treatment groups, we were able to evaluate the effects of anticipated charter school competition on school leaders’ desire for budgetary control and their spending priorities.

This result was somewhat unexpected in light of common complaints from district school leaders that they lack the managerial discretion that their charter competitors enjoy. However, uncertainty and risk aversion could theoretically reduce school leaders’ desires for budgetary autonomy in response to expected charter school competition. It is also possible that some public school leaders believe central offices will be able to most effectively respond to charter school competition in the short run.

We also found larger spending reductions on librarians, maintenance/janitors and facilities by more-experienced school leaders. These heterogeneous effects were expected since these school leaders generally have more experience responding to competitive pressures and making budgeting decisions. And if higher levels of reported experience are associated with more efficient budgeting decisions, these results may indirectly suggest that resources are currently being inefficiently allocated toward facilities and support staff in Texas.

Although our study cannot tell us why we observe these changes, the reductions in expected spending might be explained by monopoly power in the traditional public school system leading to bloat in administration and support staff. In theory, competitive pressures could lead to stronger incentives to allocate dollars toward direct classroom expenditures.

Our study has important limitations. Because our experiment examines self-reported desire for budget control and self-reported spending priorities, actual spending patterns under choice competition might not match our findings. In addition, readers should interpret the results cautiously because the response rate was only 7.6 percent and because the sample was limited to public school leaders in Texas.

Furthermore, changes in spending priorities or budget control may not be the mechanisms generating learning boosts in districts faced by choice competition. A number of competing explanations could be offered — such as potential decreases in class size driven by declining enrollment or more academically beneficial student sorting patterns under choice competition. More research is needed linking these types of changes in spending patterns to student outcomes in traditional public schools.

Corey A. DeAngelis and Christian Barnard

Corey A. DeAngelis is director of school choice at the Reason Foundation and an adjunct scholar at the Cato Institute.

Analysis: To Preserve Their Exclusive Right to Representation, NEA, AFT and Other Major Unions Will Even Buy Into Janus Ruling

Barnard: In Many Schools, Enrollment Was Dropping Before COVID. Holding Districts Harmless Ignores Student Need and Could Make Inequities Worse

Kaufman: Does Your Child’s School Use a Strong Curriculum? Why You Should Care, How to Find Out — and What to Do About It