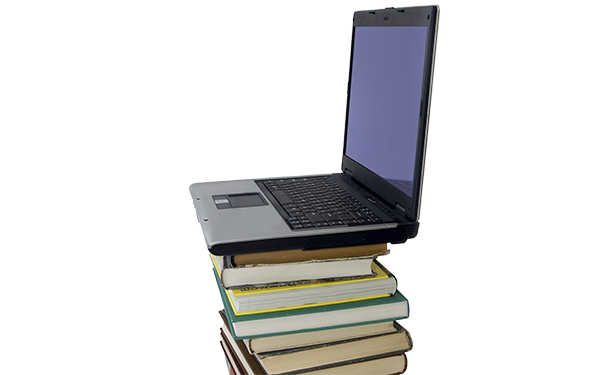 Even before Mayor Bill de Blasio took the podium on Wednesday to talk equity, excellence and his vision for improving the computer science skills of every New York City student, the national media already seemed captivated by the scale of the specifics: $81 million for 5,000 specially-trained teachers to elevate the game of 1.1 million kids.

But it was actually the mayor’s second big announcement of the morning — the proposal that ironically went missing from so many of the day’s headlines — that might ultimately have a more dramatic impact on the proficiency of those 1.1 million students: 700 reading specialists that will begin flooding neighborhood schools within three years, all with a focused mission of honing the comprehension skills of the city’s youngest and brightest.

Technology and computer science are key buzzwords in 21st century education discussions, but recent research suggests that shoring up core traditional skills for younger learners can have a far more profound impact on preparedness for a digital world.

A report released just this week by the international Organisation for Economic Collaboration and Development found that “even countries which have invested heavily in information and communication technologies for education have seen no noticeable improvement in their performances in PISA (the Program for International Student Assessment) results for reading, mathematics or science.”

“Put simply, ensuring that every child attains a baseline level of proficiency in reading and mathematics seems to do more to create equal opportunities in a digital world than can be achieved by expanding or subsidizing access to high-tech devices and services,” Director Andreas Schleicher wrote in the report’s introduction. The report is based on the findings of the OECD organization’s PISA 2012 survey that assessed the reading, math and science competency of 510,000 students ages 15 and 16 in 65 countries and economies, including the United States.

At his carefully choreographed presentation Wednesday, the mayor said his administration will make “an unprecedented investment” in city literacy, promising that all entering third-graders will read fluently at grade level by 2026. This would be achieved by making reading specialists available to all students who need them, with around 700 specialists in place in elementary schools by fall 2018.

Literacy, however, was trumped in a big way by de Blasio’s focus on computer science. Topping his to-do list of learning milestones to be achieved in the next decade (literacy for all, algebra for all, college access for all, Advanced Placement classes for all … ) was the $81 million plan to bring computer science education to every school. 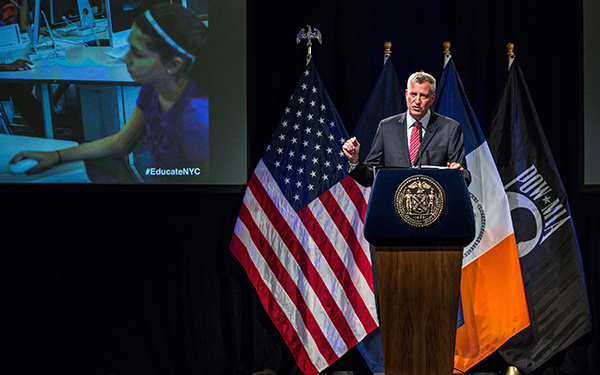 The mayor said it’s his goal that students — particularly female students and racial minorities who are underrepresented in the tech field — will grow into the high-skilled workers needed to populate the city’s growing tech industry.

Funding would flow from a partnership with the nonprofit New York City Foundation for Computer Science Education (CSNYC), the Robin Hood Foundation and the AOL Charitable Foundation with the Fund for Public Schools. The charitable organizations would match a $40 million investment of public money, according to de Blasio. So far they’ve jointly committed $11.5 million, his office said.

The mayor’s policy speech to educators and business leaders also included several other goals that would take effect during his tenure or exist beyond it:

The mayor pledged to increase the high school graduation rate in New York City from 68 percent to 80 percent over the next decade and raise the percentage of high school graduates who are college ready from one-half to two-thirds by 2026.

He said a college diploma was a huge determinant in lifelong prosperity and that college remained out of reach for too many New York City families.

"Excellence and achievement cannot and will not discriminate in New York City,"  he said. "We have to make sure that success is as common in East New York as it is on the Upper East Side."