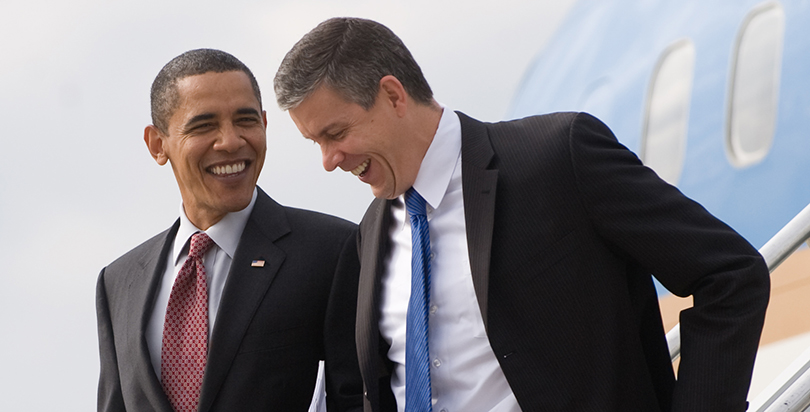 Historians, pundits and linguists can debate how much of an administration’s “legacy” is directly due to its efforts and how much just happened on its watch, but under either definition, Team Obama’s place in America’s education history is — in a word — “yuge.”

The world of public education is very different than it was in 2009 when Barack Obama became president. America has made real progress on its basic commitments: expanding access to pre-school and higher education, boosting rigor and standards in K-12 education and taking responsibility for student outcomes.

Before Obama, American states had 50 different math and reading standards. Today, almost all of our states have the same or comparable learning goals, and educators all across the country have upped their game to help students meet them.

This happened without a federal mandate — just an incentive. Republicans supported incentives and competitive grant programs until President Obama used them so successfully with Race to the Top; they will likely embrace them again after he’s gone.

The choice movement began a generation ago, and growth has been steady over the past eight years. Today, low-income parents have far more quality education choices than before.

Nevertheless, the charter sector has a quality control problem that needs to be addressed. Despite the incoming administration’s enthusiasm for uninhibited choice, the pressure to show results will grow and charter growth will slow.

More transparency is also part of our legacy. Thanks in part to Race to the Top, more states and districts are using data to drive decisions and the science of student data is more sophisticated. There’s less guesswork. We know much more about what works, and the field is more data-focused than ever before.

Today, we have far fewer “dropout factories,” and we know more about how to successfully intervene in low-performing schools. Cosmetic changes in curriculum and professional development don’t cut it. The more successful turnaround efforts include staff changes or conversion to charter schools.

The high school graduation is at a record 83 percent, 11 points above where it was in 2008. Many more young people are in college, and many more have graduated and are better prepared to find work in the new global economy.

Before we arrived, lots of people talked about tying student achievement to teacher evaluation, but hardly anyone did it. Today, many states and districts are at least trying to better evaluate and support teachers, though the work is hard.

There has been legitimate pushback to evaluation due to concerns that administrators over-test in response to the policy, that test data can’t really capture the magic of good teaching, and that so many teachers are in non-tested grades and subjects. But, in places where it is done right, like Denver and D.C., evaluation that includes some measures of student achievement is making a positive difference.

Sadly, no school district in America systematically identifies its highest-performing teachers and assigns them to its neediest students. Inflexible labor laws and resistance from teachers unions are partly to blame, but the larger problem is lack of political courage and capacity on the part of administrators. It takes a lot of time, effort and will.

Nevertheless, there is a different conversation happening across America around how to professionalize and improve teaching. Where it goes is up to the field, but it would not be nearly this far along without Race to the Top and No Child Left Behind waivers.

In the past eight years, the Office for Civil Rights exposed racially disproportionate discipline practices and provided essential guidance to states and districts on issues such as transgender students, juvenile justice, and sex assaults on college campuses. Rumors of defunding OCR should trigger alarm bells among all of us who believe in social justice and equity.

In the higher-education space, we brought transparency and accountability to the for-profit sector by tracking student debt, incomes and job placement after graduation. We began to focus on nonprofit institutions as well, though we’re not very far along. It falls to Team Trump to build on our efforts to hold higher education accountable. Given that Trump University was recently fined $25 million for fraud, I am not especially hopeful, but we will see.

The pressure from federal accountability and choice has made the education sector more reflective, more self-critical and better for children. The political pendulum has swung away from Washington, however, and the burden of proof is now on states and districts to prove that a smaller federal footprint can drive educational quality and innovation.

The list of local and state crimes against students is long: segregation, inequity, underfunding, bullying of gay and transgender students, underserving children with disabilities and non-English-speaking students, social promotion, etc. On their own, market-based solutions mostly fall short. We also need active government at all levels.

But we also know that public education monopolized by the state stagnated for decades and still underperforms in many places. That’s one reason that the parents of about 10 million children in America have opted out of the traditional public school system for charters, homeschooling or private schools. That number will grow, spurred in part by vouchers and education tax credits, but also by frustration among parents.

The biggest risk to public education is the loss of public confidence in our ability to effectively educate children at risk. If middle-class taxpayers, who provide the lion’s share of education funding, don’t believe it is worth it, they won’t pay for it.

On the other hand, if they examine the moral and the economic case for increased investment in the next generation, they will realize that education is the single best bet society can make. Every problem we face — poverty, crime, joblessness, drug abuse, poor health, racial intolerance — will be reduced through better education. With better education, social costs will decline and economic benefits will increase.

Looking back, the Obama administration made progress where others hadn’t because we challenged our own political allies — the teachers unions — on both choice and accountability. We did not make unions our enemy, but we did ask them to change, and, to their credit, many of them did. There has been some backsliding, but the progress is real.

So far, Republicans have not done the same. They capitulated to the local control zealots in their own party, some of whom radically defunded public education at the state and local levels. Few of them show much appreciation for the historic role the federal government has played in protecting students and driving equity, innovation and access.

Given time, however, Republican policymakers may come back to the sensible middle again and find the right balance between oversight and autonomy, between choice schools and traditional districts, between supporting teachers and holding the system accountable, between efficiency and equitable, adequate funding.

Ultimately, the greatest hope for progress in public education is informed and active parents demanding the best for their children. With Democrats out of power in Washington, energizing and activating parents at the state and local levels is the most important task at hand.

Peter Cunningham is the executive director of Education Post and served as an assistant secretary of education in the Obama administration.