Criticism From GOP, Concerns From Dems on ‘Supplement Not Supplant’ ESSA Funding Rule 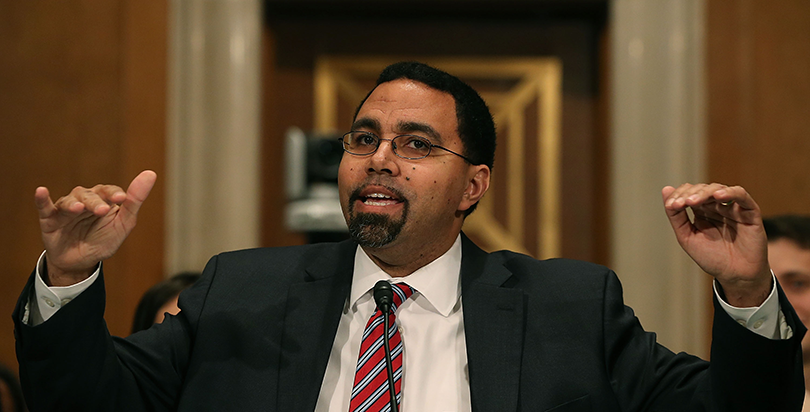 Members of Congress have weighed in on the Education Department’s controversial funding rule known as “supplement not supplant,” with responses ranging from sharply critical to supportive but concerned.
The rule, part of the Every Student Succeeds Act, is designed to ensure that states and school districts don’t shortchange schools with large populations of poor students and then fill in the gaps with federal Title I dollars.
Democrats, led by Education Secretary John King, have said that comparable resources, including teacher salaries, are the key to ensuring equity among schools. Republicans, teachers unions, local district leaders and other opponents have said for months that the department is exceeding its authority and the proposal could cause an upheaval in school programming and finances.
In comments submitted Friday, congressional Republicans minced no words, accusing the department of having overstepped and threatening to do whatever it takes to block the proposal. Their Democratic counterparts, meanwhile, backed the basic premise of the rule but expressed reservations about a lack of clarity in one specific provision.
Twenty-five Republicans from both chambers, including education committee chairmen Sen. Lamar Alexander and Rep. John Kline, signed on to comments charging that the department didn’t consider the plain language of the law or Congress’s intent when drafting “supplement not supplant.” They said Congress had always intended that states and districts could demonstrate they were meeting federal requirements by doling out local money without considering a school’s poverty status — discretion generally not allowed under the four options the department has proposed to demonstrate compliance.
Both the House and Senate education committees considered — and rejected — language similar to the Education Department’s proposal, the Republicans wrote. In addition, they said, the plan disregards several curbs on the education secretary’s authority, including a ban on mandating how states and districts spend local dollars.
“It is unfortunate that, once again, the department has refused to adhere to the letter and intent of the law or listen to the many stakeholders who helped shape ESSA, are responsible for implementing the new law and have already articulated the problems this [proposed rule] would create. Congress will do everything in its power to ensure that this proposed rule never becomes final,” the Republicans wrote.
They cited a 1984 Supreme Court case governing when and how the executive branch can issue regulations — which hinges largely on what Congress had intended when writing the law. Their repeated emphasis on congressional intent could be a way to bolster any future lawsuit seeking to block the regulation on those grounds. (Republicans’ other options, a formal congressional review process or language in a spending bill, would require Democrats’ cooperation, which is unlikely given their support for the basic premise of the proposal.)
The Republicans’ comments don’t mention an alternative plan, released last week by the Council of Chief State School Officers, that Alexander endorsed.
(The 74: As Deadline for Final ESSA Funding Rule Approaches, Opponents Pressure King With Alternative Plan)
Meanwhile, the top two education committee Democrats, Sen. Patty Murray and Rep. Bobby Scott, put their weight behind the department in their comments. However, they listed a few specific concerns.
Murray and Scott noted that the proposal requires that “almost all” state and district funds go to schools — without clarifying what “almost all” means. If districts don’t know it may be permissible to spend money on larger programs, they could be less likely to allocate funding for districtwide expenses like transportation or preschool, Murray and Scott said. A provision that measures funding by average costs could also discourage districts from implementing specialized programs, such as magnet schools or career and technical education, because standardized programs would make for easier bookkeeping and compliance with the rule, they added.
“Achieving true educational equity is not an easy task … We applaud the department for using its full regulatory authority to tackle this important challenge to ensure that schools in every community are equipped with the resources necessary to graduate all students ready to succeed,” Murray and Scott concluded.
The department released its proposed final rule in early September and began a 60-day public comment period that closes at the end of the day Monday. More than 3,000 comments had been submitted by the close of business Friday. In the coming weeks, likely before the end of the Obama administration, the department will release a final rule.
Submit a Letter to the Editor
November 7, 2016