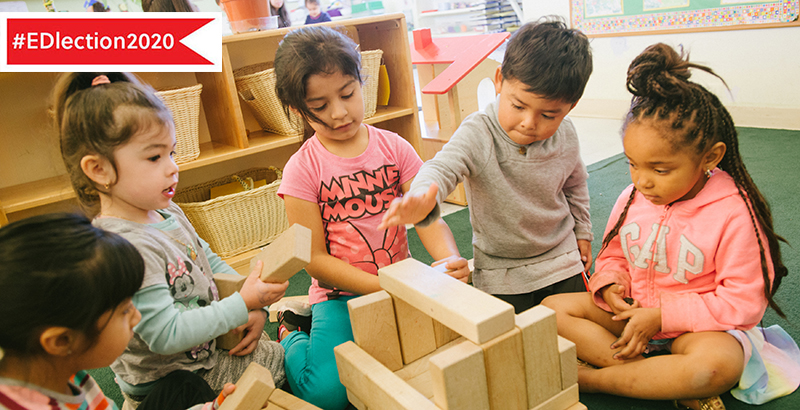 Red states, such Alabama, are just as likely to have popular state-funded programs as blue states like New Jersey.

But for all the talk about universal preschool in recent years, the numbers show that most states remain far from realizing it. According to the most recent State Preschool Yearbook from the National Institute for Early Education Research, just over a third of 4-year-olds and only 6 percent of 3-year-olds nationally attend state-funded programs.

That’s why policymakers and experts who have long advocated for a greater federal role in early learning welcome Democratic presidential nominee Joe Biden’s plan to provide universal preschool for 3- and 4-year-olds.

But preschool is just one part of his sprawling, $775 billion “caregiving” agenda, which also includes tax credits for child care expenses and policies to increase teachers’ wages and levels of education. On the one hand, experts said, the plan lacks detail, raising questions about how it would improve on programs that more than 40 states and cities like New York and the District of Columbia have already established. This November, voters in Colorado and Multnomah County, Oregon, which encompasses Portland, will also decide whether to raise taxes to pay for pre-K.

But those same experts say the Biden plan’s lack of detail may indicate an agenda spread too thin, one that attempts to fix all of the persistent problems across the birth-to-5 sector in one swoop — limited access, mediocre quality, low wages for providers and high costs for families.

“It’s … a gangly set of program streams that may not consolidate what the federal government is already doing,” said University of California, Berkeley, sociologist Bruce Fuller, who has long studied early-childhood policy. “I worry this admittedly progressive plan was written by a committee of 50 advocates or more.”

Unlike K-12 offerings, programs for young children in the U.S. are financed through a complex and, advocates say, insufficient mixture of public dollars and parental investment. Families face a jumble of eligibility cutoffs, sliding fee scales, waiting lists and part-day programs that might conflict with their work schedules.

Because preschool and child care centers often combine funding from different sources to cover a full day, a parent might not have to pay anything for the morning hours, but then be charged for the afternoon. And despite the label, many “universal” programs are only available in specific neighborhoods or are limited to families under a certain income level.

The child care subsidy system presents similar challenges. A subsidy might not actually cover the cost of care or the type of provider a parent prefers, and studies show that participation rates in the subsidy system have been declining. Meanwhile, those who earn too much for a subsidy often pay a large chunk of their income on child care or might lean on relatives for help if they can’t afford a private program.

“Confusion reigns in the eyes of parents,” Fuller said. “Washington could simplify [the system] to help equalize parents’ access, whether rich or poor.”

W. Steven Barnett, senior co-director of the National Institute for Early Education Research, said he assumes Biden’s pre-K plan would be “in the vein of the Obama administration’s approach.”

That approach included roughly $1 billion in grants to 20 states between 2011 and 2013 to create early-childhood systems. An evaluation showed that programs receiving the funds reached higher levels of quality. A new round of grants in 2014 funded similar efforts, which many states used to add more preschool classrooms and which is now supporting birth-to-5 programs in 26 states and territories. 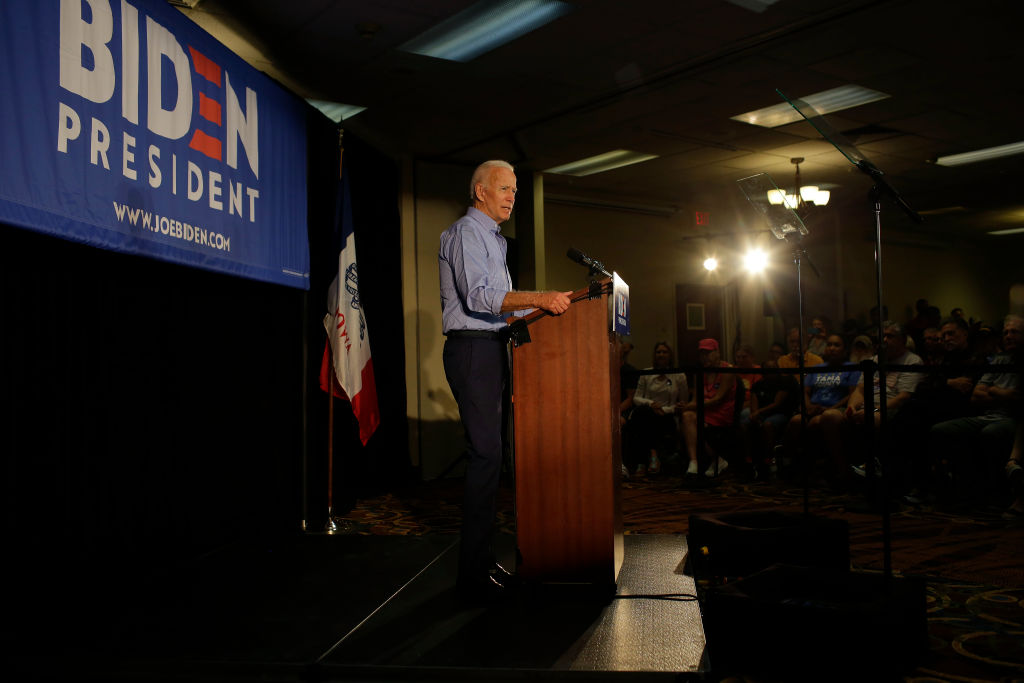 Joe Biden in 2019 on the campaign trail in Iowa. (Joshua Lott/Getty Images)

The Biden plan doesn’t include a price tag. But others have estimated that preschool for all 3- and 4-year-olds in the U.S. — about 8 million children — would cost about $33 billion, $26.8 billion more than states are currently spending on such programs. Biden’s plan suggests he would triple funding for Title I to cover the cost, at least for poor children. States would pick up the cost for the rest — a “shared-funding approach,” Barnett said.

Even with broad political support, however, universal preschool still sparks debate. Proponents point to Oklahoma, which in 1998 essentially added pre-K as another grade level. A long-running research study by Georgetown University found that benefits can last through middle school. Eighth-graders who attended the program as 4-year-olds had higher math scores, were more likely to enroll in honors classes and were less likely to repeat a grade than those who didn’t attend.

But those more loath to increase government spending on pre-K say that universal programs benefit families who would likely pay to send their children to preschool anyway. Critics also point to disappointing findings, such as those from Vanderbilt University researchers, who found that children attending Tennessee’s state-funded pre-K program were more likely than those who didn’t attend to be placed in special education and have discipline problems by third grade.

Those weak results, Barnett said, show why staff qualifications, a well-planned curriculum and many other recommended practices are important. He added that to achieve the kinds of long-term positive results from early-childhood education that proponents highlight, states would have to set the bar “considerably higher” than where it is now.

A call for ‘economic diversity’

Advocates of universal models also point out that children benefit from being in classrooms with peers from different socioeconomic backgrounds.

“There’s a lot of research about economic diversity in classrooms. That’s one of the strong arguments for universal,” said Scott Moore, CEO of Kidango, a nonprofit that runs early learning programs in the San Francisco Bay area.

Recent evidence from New York City, however, shows that even universal models can contribute to racial and economic segregation if officials don’t carefully consider where to locate the classrooms.

Biden’s plan would include 3-year-olds, whom most states don’t currently serve on a broad scale, even though studies show that children from low-income homes benefit more from two years of preschool than one; they are less likely than those with one year of preschool to be referred for special education, to be abused or neglected, and to commit crimes as adults. 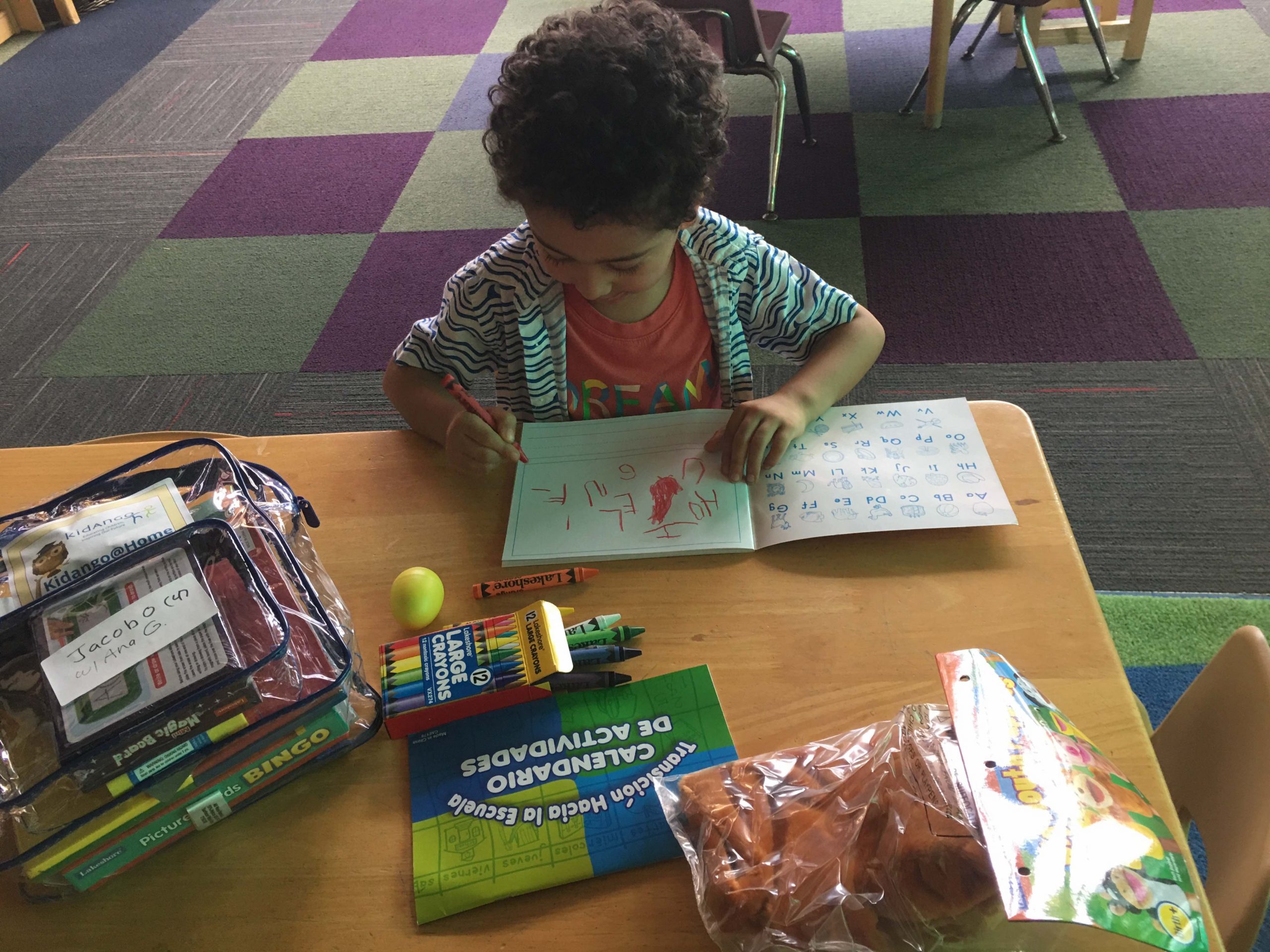 A family child care center in the Kidango network. (Kidango)

In-home providers, including family members, friends and neighbors, would also figure into Biden’s plan. His plan includes a refundable credit of up to $8,000 for the care of one child and $16,000 for two or more children, more than doubling the current rate.

Biden’s views on using tax credits for child care expenses have evolved since his time in the Senate. In 1981, as a widower raising two boys, he opposed such credits for higher-income families. “I think it’s a sad commentary on our society when the Senate of the United States says, as a matter of social policy, that we should make it easier for people who have neither the financial necessity nor personal need to forsake their responsibility to care for their own children,” he wrote in an op-ed.

Elaine Maag, a principal research associate at the Urban Institute’s Tax Policy Center, said that she could understand how the candidate’s views could change and that his plan is a “recognition that middle- and even some high-income families have problems” affording child care.

The benefits of tax credits, she said, is that they are flexible and can cover care on nights and weekends. “If you’re … working all hours, those universal pre-K programs might not link up with your actual child care needs,” she said.

But she views credits as less helpful for lower-income families that might struggle to make weekly or monthly payments to centers. Maag added that the Internal Revenue Service wouldn’t necessarily ensure that families choose high-quality programs.

While President Donald Trump’s concise second-term agenda doesn’t include any mention of early-childhood education or child care, increasing support for child care and paid family leave has been one of daughter and adviser Ivanka Trump’s priorities. And during Trump’s administration, the Child Care and Development Block Grant, which includes subsidies for low-income families, saw its largest one-time increase of $2.4 billion.

The role of parents

Some conservatives argue that if the next president really wants to help families and young learners, he should focus on advancing financial policies that make it easier for parents to stay home with their children. Katharine Stevens, a resident scholar at the right-leaning American Enterprise Institute, argues that any studies pointing to positive outcomes among those who attended a state pre-K program are actually highlighting the contributions of parents — not the classrooms.

Strong, long-term results from early-childhood programs — such as good attendance and high school completion — “point clearly to parents, not preschool, as the cause,” she wrote in a recent commentary. “Common sense suggests that parents who voluntarily send their children to school for an entire year when they are 3 or 4 years old are more likely to ensure that their children have good attendance and graduate from high school on time.”

If Biden wins in November, it’s unclear which aspect of his broad early-childhood platform would take priority. Fuller advised the nominee to “take stock of what’s working already to lift young children’s growth, to narrow gross disparities cast by race and social class, then trim what’s not working and confusing for parents.”

But Lea Austin, director of the Center for the Study of Child Care Employment, said that focusing exclusively on a popular idea like universal pre-K will allow other problems in the field, such as significant wage gaps for teachers, to fester.

“I do think [the plan] certainly moves the needle from where we are,” she said, “and can push states to implement high-quality programs with a focus on the workforce.”