Conflicting Legal Rulings Leave School Districts in Texas With Choice: Flout Gov. Abbott and Mandate Masks For Students — or Wait For the Dust to Settle 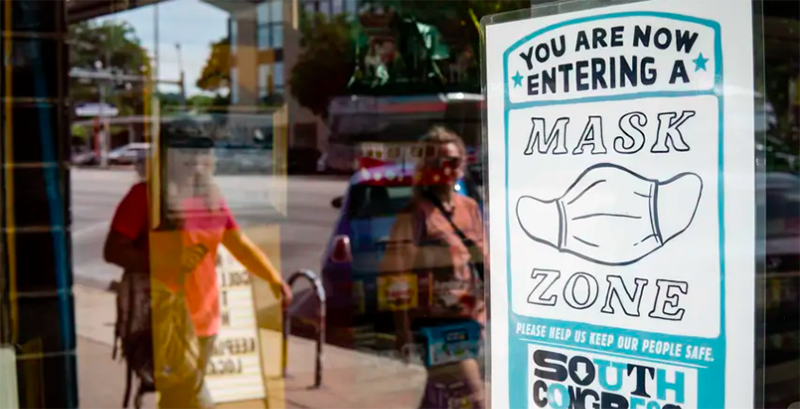 A sign at Big Top, a candy store in Austin, tells patrons that masks are required for entry. Austin and other local governments have passed mask mandates, defying Gov. Greg Abbott’s order banning them. (Sophie Park / The Texas Tribune)

A chaotic and confusing patchwork of mask mandates has cropped up across Texas as state officials and local governments duke it out in court and COVID-19 pummels the state.

Often, a county line or a school district border can be the difference between whether mask-wearing is required or not.

A number of cities, counties and school districts in the past week have defied Gov. Greg Abbott’s executive order banning mask mandates and made mask-wearing mandatory in public schools in a bid to try to prevent the highly contagious delta variant from infecting schoolchildren too young to get vaccinated — and to keep hospitals from overflowing with COVID-19 patients.

Dallas County had the most wide-ranging mask mandate in the state — covering public schools, colleges, businesses and many government buildings. In neighboring Tarrant County, the county doesn’t require mask-wearing anywhere.

Colleges in Travis County must require masks — but not two hours south in Bexar County. There, officials decided to keep the mandate just to K-12 — a move intended to give state officials challenging the order in court fewer opportunities to strike it down.

“We restricted it because we didn’t want to overreach and have another reason [for the state] to knock down our order,” Bexar County Judge Nelson Wolff said.

For Texans living in urban areas, another source of confusion over mask-wearing are the pingpong legal battles between Abbott and local officials. In some cases, a local mask mandate has been overturned by one court, only to be reinstated within hours by another.

For example, the Texas Supreme Court temporarily nixed mask mandates in Bexar and Dallas counties Sunday evening. Less than a day later, a lower court judge essentially reinstated the Bexar mandate for public schools — though not without acknowledging the confusion.

“I just wanted to apologize to all those parents, school administrators, the superheroes that we call teachers for what someone called the equivalent to a legal tug of war, unfortunately where our children are right in the middle,” District Judge Antonia Arteaga said in making her ruling Monday afternoon.

After the Supreme Court ruling, Dallas County Judge Clay Jenkins insisted in a tweet that justices “did not strike down my face mask order.”

But the court made Jenkins’ order unenforceable by removing his ability to fine businesses that don’t comply, said Doug Alexander, a lawyer representing Jenkins.

“What’s ‘cray cray’ about it is that everybody’s telling [Jenkins] he needs mask mandates to save lives in Dallas County,” Alexander said. “For reasons that I can’t fathom, the governor and the attorney general are hell-bent on tying the arms of all governmental entities from doing exactly what the physicians on the front lines are telling them they must do to stop the surging pandemic.”

Amid the legal disarray, many school districts have walked back plans to require masks.

The same goes for Fort Bend ISD — another district that was set to require masks, but changed course in defiance of Fort Bend County Judge KP George’s mask order for the county, which includes public schools.

Some districts aren’t waiting for the state to challenge local mask orders to reverse course. In Travis County, Eanes Independent School District pulled back its mask mandate after the state Supreme Court decision — even though the decision didn’t apply to Travis County and the county mask mandate remains in effect.

“We will follow the law as it is determined by the highest court at the time in this legal chess match,” the school district posted on Twitter.

Others have stuck with their mandates through the chaos. Dallas, Austin and San Antonio ISDs will continue to require masks despite the Supreme Court order.

In parts of the state where masking orders remain untouched by the legal crossfire, officials are weighing the possibility of expanding the mandate beyond schools and colleges.

Plenty of businesses in Austin have adopted their own masking requirements without a local mandate, Austin Mayor Steve Adler said. But he hasn’t ruled out mandating masks for private businesses if the number of COVID-19 patients in hospitals continues to rise — though Adler doesn’t relish the idea.

“We’re all just trying to keep people safe and to keep the economy open,” he said.

Abbott has pushed back in recent days on the growing rebellion by cities, counties and school districts against his order — arguing in court that localities don’t have the authority to ignore his order and are creating undue confusion with local mandates. Texas is past the need for mask mandates, Abbott has said.

“Any confusion stems from local officials violating the governor’s executive order in their attempt to restrict the rights and freedoms of Texans,” Abbott spokesperson Renae Eze said in a statement. “Every Texan has a right to choose for themselves and their children whether they will wear masks, open their businesses, or get vaccinated.”

“I think there’s huge confusion when the science and the doctors all say that we need to do everything we can to get people to mask and to get vaccinated — and our governor won’t make it happen and will stop local communities from doing what they can to make it happen,” Adler said.

Joshua Fechter and Brian Lopez are reporters at The Texas Tribune, the only member-supported, digital-first, nonpartisan media organization that informs Texans about public policy, politics, government and statewide issues.

Disclosure: Steve Adler, a former Texas Tribune board chair, has been a financial supporter of The Texas Tribune, a nonprofit, nonpartisan news organization that is funded in part by donations from members, foundations and corporate sponsors. Financial supporters play no role in the Tribune’s journalism. Find a complete list of them here.

Joshua Fechter is a reporter at The Texas Tribune.