Commentary: Why We All Need to Worry a Little Less About Preparing for Tests — and a Little More About How Our Schools Are Preparing Our Children for the Real World

Standardized tests are easy to hate. They take up valuable time in school. When there are high stakes attached, they can cause anxiety for teachers and students alike. Too often, they include questions that don’t seem to measure the things that really matter. Just in recent news cycles, we’ve seen tests come under renewed (and rightful) scrutiny: A question was pulled from Massachusetts’s 10th-grade English language arts test after teachers and students made the case that it was racially insensitive; with enough money, wealthy parents can buy their children higher scores on college entrance exams; and the exams for entry into New York City’s selective admissions high schools are producing grossly inequitable results.

All of these are valid reasons to be mindful of how we use tests to make decisions about students and schools. But it also seems to me that now is a good time to remind ourselves why (and when) tests are actually useful.

I recently ran across a math problem that caught my attention. It looked like this: 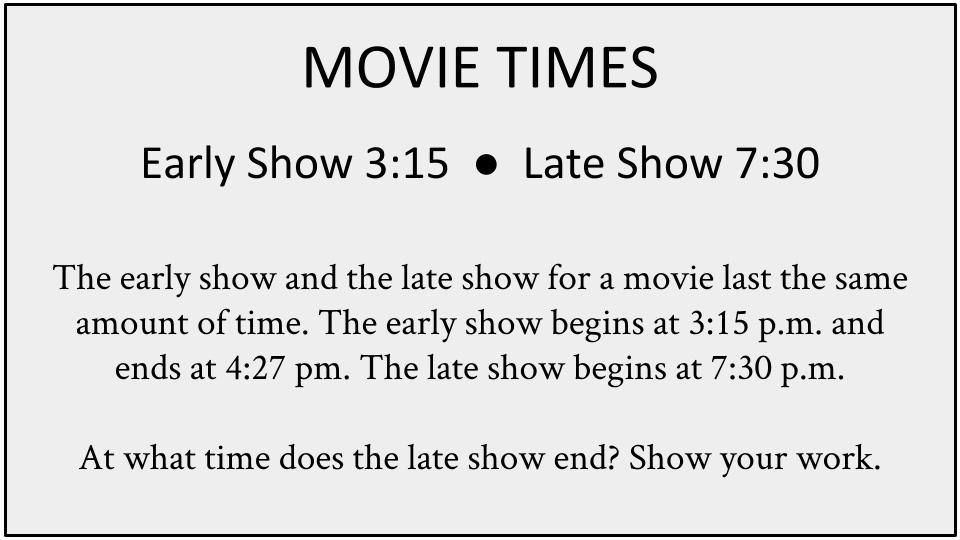 It’s a very practical problem. To solve it, students must calculate that the movie lasts one hour, twelve minutes, and then add that length of time to the 7:30 start time. The answer is 8:42.

The problem is intended for fourth-graders. It was included several years ago as part of a national testing program called NAEP (the National Assessment of Educational Progress) that is done every couple of years. NAEP is sometimes called the “Nation’s Report Card.” A sample of students in each state take the test, but it doesn’t carry any stakes for schools or students.

I’ve been reflecting on this test question because it struck me as quite easy. As a fourth-grader, you can’t get through a single day without confronting time. Soccer practice starts at 3:00 and lasts 90 minutes. We are leaving for Grandma’s house in 15 minutes. You can play the video game for 10 minutes and then it is your brother’s turn, and then after 10 minutes it’s your turn again. Time is a fundamental element of life.

But as it turns out, this problem was not too easy for American fourth-graders. In fact, more than two-thirds of them got it wrong.

This is not about other people’s kids. Most white students couldn’t solve the problem, nor could most students of color. Most students whose families do not qualify for free lunch answered incorrectly, just like most students whose lunch is subsidized or entirely paid for by the government. Most students in Massachusetts, which is our highest-performing state, got it wrong, as well as most students in states that usually fall in the bottom of the rankings. And while all groups of students had trouble with the question, students from lower-income and minority families had more trouble.

Why is this so hard? Is it a trick question? Doesn’t seem to be. Is it the kind of thing that is not covered in math class these days? Nope. There is a third-grade learning standard used by most states that reads “Solve word problems involving addition and subtraction of time intervals in minutes.”

This is why tests are useful tools. Done right, tests give us information about what our children are and aren’t able to do. As a parent, a citizen, and an educator, I want and need that information — to better understand how to support my kids at home, what questions I should be asking of their schools, and what I should be demanding of our elected officials.

There are a lot of problems with the way we use tests in schools and institutions of higher education. And we should be vocal about those issues and work to solve them. But that doesn’t change the fact that we need to know how our kids are doing, and tests are one way — an important one — of capturing that information. When two-thirds of our nation’s fourth-graders can’t solve the problem, we should be worried. Not because they’re failing a test, but because they’re not being set up to succeed in life.

Timothy Daly is CEO of EdNavigator, a nonprofit organization that helps hardworking families stay on track for success in school and beyond.