Commentary: To Improve Education in Our Technological World, Put Teachers in Charge of ‘Doing Different’ and Empower Them to Innovate 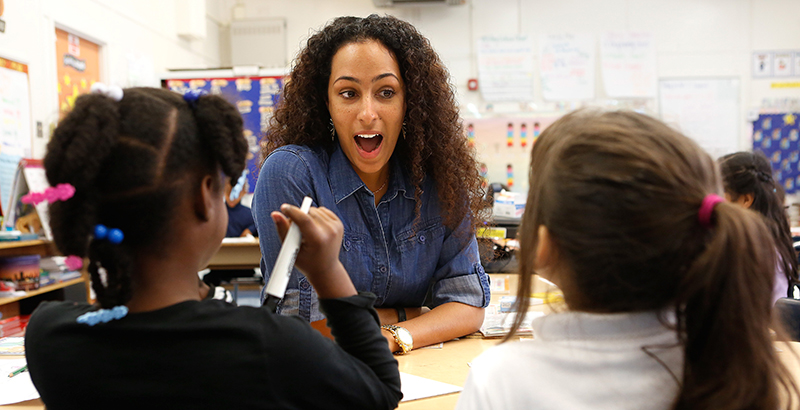 With personalized and digital learning approaching, traditional real school is obsolete. Now, for learning to be better, school will have to be different.

The why is obvious. Proposals for radical change are an act of rebellion, from a minority. They threaten organizations that value uniformity and that know most parents and staff are not yet ready for what does not look like real school. John Goodlad, a longtime professor at UCLA and the University of Washington, said it in 1984: “The cards are stacked against innovation.”

The — understandable — caution of boards and administrators works to preserve schooling’s traditional givens: age-grading; courses and classes; education as something that adults “deliver.” Saying “yes” to change would make those in charge accountable for what happens. It is safer, easy, to say “no.” Why risk an election, or a career?

The way out is obvious: Enable schools and teachers to try things without having to ask permission. If enrollment is voluntary, the scale small, and the innovation quickly closed when seen not to be working, risk will not be a real problem. After decades of seeing change pushed from the top, the school would become the unit of improvement.

That would let education evolve the way most large systems do: the different appearing, spreading as people decide they are ready, improving as it spreads. The process is sociologist Everett Rogers’s: innovators, early adopters, early majority, late majority, laggards. Diffusing gradually, not necessarily slowly.

This simple idea of arranging education to be a self-improving system is put down by those envisioning change as a comprehensive transformation through mechanisms of central authority. The process that political science professor Charles Lindblom called mutual adjustment is messy and untidy, so, “The most intelligent and logical people underrate its potential. This continues to be one of the major intellectual problems in the organization of human action.”

Legislatures seldom enact comprehensive visions. So the practical question is: How to redesign the district sector to devolve the opportunity for innovation?

Part of the answer stands looking at us. The states’ chartering legislation created a second sector of public education open as to the kind of school created. This institutional innovation, spreading across the states, has let schools innovate with approaches to learning and new forms of school, these also spreading.

The challenge today is to get the district sector the capacity to respond. How? Get boards to be authorizers rather than operators of schools.

Watching the Colorado legislature enacting chartering in 1993, Randy Quinn, executive director of the Colorado Association of School Boards, saw that as an authorizer, a board could offer “the various kinds of programs the community wants.” Chartering might be “a blessing in disguise,” he wrote members. It was the “split screen” idea: innovation for those ready; improvement for those not yet.

Colorado’s boards ignored the advice. Not surprising, as a centralized district is unlikely to relinquish what it sees as its role: deciding what’s taught, and how; running the schools.

So, the states will have to intervene. District organization, set in law, is the state’s responsibility. A legislature might mandate a different structure, perhaps only for clearly unsuccessful districts. Or, it might offer district voters an opportunity to adopt an organizational plan more conducive to innovation, as Minnesota did successfully to upgrade suburban municipal government.

The idea of the board as authorizer of different schools is alive in the current discussion, in Paul Hill’s proposal for an all-contract district and in David Osborne’s Reinventing America’s Schools. But the plea for autonomous schools asks districts to act against their nature and lacks a political driver.

The initiative might acquire a political driver were it to propose that in these schools, teachers could, if they wished, lead the learning, using the partnership arrangement common in most professions. That idea appeared in Minnesota’s charter sector in 1993. It can work also in the district sector: Milwaukee, when Bill Andrekopoulos was superintendent, had about a dozen workers’ cooperative schools, the teachers remaining in district employment.

Putting teachers in charge of doing different is the process for change most conspicuously not yet tried.

● Able to lead the learning, teachers change schooling more radically than do boards.

● If skillfully argued politically, the case for enlarging teachers’ professional role could attract both union and reformer support.

Opening the district sector to innovation would challenge the organizations leading chartering to clarify what they envision for public education. With chartering under attack, surely the National Alliance for Public Charter Schools should be saying everywhere: A successful charter sector is essential for the success of district public education.

Which is true. Without the charter sector pushing it with innovations — and, yes, competing for enrollment — a district sector stuck in the pre-1990 public-utility model, as most are, could never make the hard decisions that change requires.

State and national associations like the Education Commission of the States, now so quiet, should be saying publicly and loudly what the CEO of AT&T said after microwave towers appeared: It is time to stop defending the old utility arrangement; time to open the system to change.

Think about the explosion of innovation in telecommunications that followed. Imagine a similarly dramatic burst of change in schools, of improvement in learning narrowing inequality, as K-12 becomes a self-improving system. Think, too, how easily learning could bypass school were the digital-software industry to decide to market its programs directly to families.

Is it in anyone’s interest, really, for public education any longer to stand pat?

Ted Kolderie is a co-founder and senior fellow at Education Evolving, a Minnesota-based nonprofit organization working to improve public education.

Ted Kolderie is a co-founder and senior fellow at Education Evolving, a Minnesota-based nonprofit organization working to improve public education.