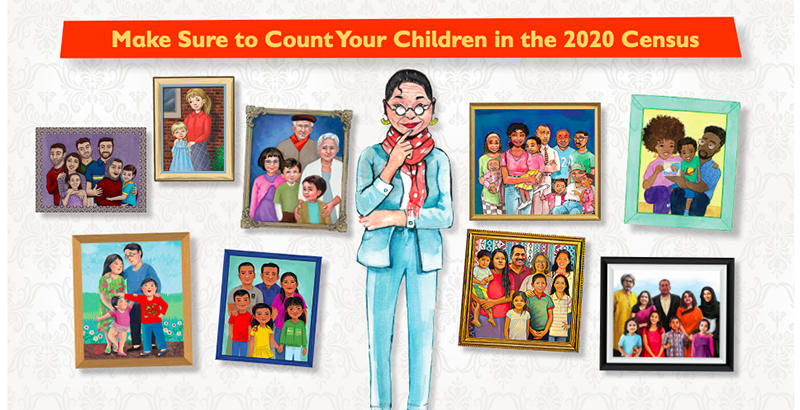 As the COVID-19 pandemic spreads throughout the United States, the urgent need for health and stability is paramount. In these early weeks of spring, we must work together to minimize transmission and flatten the curve.

Yet even as we secure the basic safety of our homes and communities, we must not forget the important, once-a-decade 2020 U.S. Census currently underway. The information collected by this nationwide counting effort will shape public spending, research and decision-making for the next 10 years, from federal education, health and infrastructure allocations to the number of seats each state occupies in the House of Representatives. An accurate census count ensures that communities have the resources they need to respond to emergencies and thrive in less turbulent times.

This is especially important for young children. The 2010 census missed as many as 2 million children under the age of 5 — the biggest undercount in a half-century — and we have been living with the impact ever since. Undercounted communities will get less than their fair share of $800 billion in annual federal spending over the next decade, including more than $160 billion for programs vital to children, from health insurance and food stamps to special education and Head Start preschools.

Census letters have been mailed to most households by now, and a new online response form can make participation relatively quick. But that won’t be enough to gather accurate data on young children from complex or fluid households in communities that are traditionally hard to count, such as dense urban neighborhoods, rural regions and immigrant populations. Advocates had planned robust in-person campaigns to guide these families to participate, but such gatherings are not possible, for now.

Now, those same advocates are quickly turning to online resources to encourage all families to take part. For example, our philanthropic foundation, Carnegie Corporation of New York, is among those supporting the publication of We Count!, a children’s book and adult education program about the census available online in 15 languages. It was inspired by interviews about the census with nearly 200 parents and social service workers in immigrant communities around Paterson, New Jersey, where just 60 percent of residents responded to the last census, in 2010.

“In New Jersey, 27,000 kids were missed in the last census — that’s enough to fill 1,350 more classrooms than we were ready for,” said Lisa Bernstein, whose nonprofit organization Simply Put Media conducted the interviews and wrote the book. “The census is at the core of our democracy, and we are going through a time when who counts in America is really important.”

Bernstein and child-development researcher Faith Lamb-Parker studied changes in families’ perceptions of the census based on reading the book and found that relevant, direct information from a trusted source made a big difference.

Initially, 85 percent of families said they knew little to nothing about the census, and only half said they were likely to take part. They were confused about how to report complex living situations and hesitant to share details of their lives, citing worries about law enforcement and immigration raids, despite the confidentiality of all responses. Critically, Simply Put also found that two-thirds of the “trusted messengers” that families typically rely on for assistance, such as teachers, librarians and social service workers, felt unprepared to help fill out census forms accurately. The cheerful, diverse We Count! materials were designed to give both messengers and families a common source of relevant information, and after reading the book, 80 percent of families said they would participate.

Advocates like Simply Put are using digital tools to provide direct, relevant information in hard-to-count communities, including phone calls, text messages and social media campaigns. While moving outreach online has its limits — 1 in 10 Americans does not use the internet, and a similar share of low-income residents do not carry mobile devices — it can serve as a bridge until community hubs reopen and in-person messengers re-engage. The Census Bureau has extended the deadline for data collection, with in-person enumerators starting their visits May 28 and the count extended through Aug. 14.

The coming weeks and months will determine the flow of federal dollars over the next decade — nearly an entire childhood. As the current crisis shows, every family needs and deserves its fair share of federal support. We can all do our part and fill out our forms, tweet, post and promote the importance of the census using the technologies keeping us connected in these difficult days, taking our cue from local partners working to provide helpful information in undercounted communities nationwide. Our children are counting on us to get it right.

Geri Mannion is director of the Strengthening U.S. Democracy program at Carnegie Corporation of New York. Ambika Kapur is an officer in the Education program.

Geri Mannion is director of the Strengthening U.S. Democracy program at Carnegie Corporation of New York.

Ambika Kapur is an officer in the Education program.