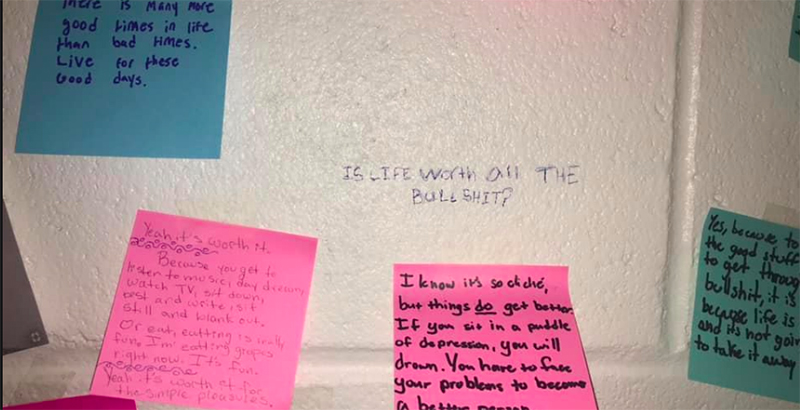 Sticky notes, those ubiquitous colorful squares used for everything from brainstorming ideas to reminding forgetful parents to pick up milk, were used in a Golden, Colorado, high school for what may be their highest purpose: to help save a life.

"Is life worth all the bullshit?" After someone saw this written on one of the bathroom walls, a class wrote sticky notes saying why life is worth it. This kindness went viral, encouraging positivity throughout the media.

“Is life worth all the bullshit?” was scratched in ink on the white cinderblock.

“When I first saw it, my reaction as a teacher was, ‘Ah, graffiti! We need to cover this up or erase it or get rid of it,’ Ferraro told CBS Denver. “And then I had the thought of, if we do that, are we ignoring the question and the person that asked it and the pain that they’re in?”

Ferraro encouraged her students to answer, and soon the desperate message was surrounded by sticky notes bearing messages of hope.

“YES, because you are so LOVED by so many people, even strangers. Sometimes you go through the hard times to get to the good. Trust me, I’ve been there,” read one.

“There are many more good times in life than bad times,” read another. “Live for those good times.”

Soon there were so many notes, they spilled out onto the hallway walls.

“People are going through stuff so severely that they don’t want to be alive anymore,” sophomore Teagan McGovern told Fox31. “I don’t think people grasp how big of a deal that is.”

According to the U.S. Centers for Disease Control and Prevention, suicide is the second-leading cause of death among teenagers. The Suicide Prevention Lifeline offers information and ways to help.

i walked into the bathroom today during my 3rd period english class and when i saw this my jaw dropped. somebody wrote…

“I think it’s always — always — important to reach out and see if anybody needs help or even just a small act of kindness like the sticky notes,” Blackman told CNN.

Ferraro told CNN that no one has yet discovered who wrote the original graffiti message. The responses, however, echoed through the entire school and were undoubtedly heard by others, reinforcing optimism and perhaps even holding off despair.

“Personally, I know going in there even when I’m not having a bad day is just like a good feeling just to see the positivity,” student Taylor Volek told Fox31.