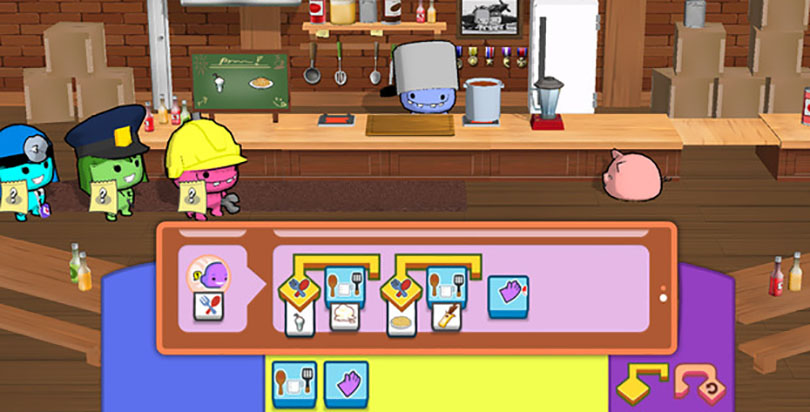 Reading ability isn’t necessarily a prerequisite for logical thinking. That’s why Grant Hosford, CEO and co-founder of codeSpark, a Pasadena-based startup developing computer science games for kids, has created a new app where reading doesn’t get in the way.
And without barriers, Hosford is now teaching coding to kids as young as 5.
“We get the keyboard, mouse and syntax — how code is written — out of the way,” Hosford says. “The problem solving [we want kids to do] doesn’t have much to do with syntax. A 5-year-old shouldn’t need to be learning JavaScript. But the logic behind all these languages is the same and the sequential thinking will serve them well for whatever they study later on.”
The company’s newest app is called “The Foos” and the game has ballooned in popularity with school-age downloaders. It is now the No. 1 kids app in 19 countries and winner of countless high-level awards. At the root, The Foos uses structured missions to teach kids how to play a game and lead them into free play areas where they can put their new problem-solving knowledge to use, coupled, of course, with their imagination. And all along the way, kids learn key computer science and programming concepts, while getting the chance to solve problems through creating their own games, stories and characters.
The idea for teaching computer science at such a young age — ages 5 through 10 are still the largest user group — started with Hosford’s own kids. His middle daughter — he has three children, including two girls — signed up for a Lego robotics class on her own in the first grade. Hosford came along and found that of the 24 students in the class, not only was his daughter the youngest of the group (by at least two grades), but she was also the only girl. When Hosford went looking for some ABCs of computer science to keep her interest level going, the digital business expert found, well, “it wasn’t a thing.”
“I’ve worked in tech since 1999,” he says. “I know how powerful a little bit of knowledge around computer science can be. Some great research out of MIT showed that kids as young as 5 can learn logic fundamental to computer science.”
The Foos teaches that logic.
The game allows users to make blocks jump or change sizes, add spikes that give life, or build stairs out of Foo pets. It also lets kids program anything and everything in the game. “We started with these puzzles that teach concepts and introduce characters,” he says. “But from the beginning we knew we wanted to teach concepts first and let kids put them to work. It would be a shame to teach about computer science and not let them make anything.
“If you haven’t been exposed to computer science before, it takes all the sharp edges off.”
The game uses characters and stories, taking language out of the equation, which has not only helped reach pre-readers, but also allowed the free game to stretch to 174 countries in just 14 months.
Not only has support from the Android and Apple iTunes communities helped propel the game to heavy personal use (it won a Parent’s Choice Award Gold), but a partnership with Code.org has pushed it into schools, giving codeSpark’s The Foos a fairly even split between school and home use.
“The progression of schools getting interested in computer science has moved faster than I hoped, but in a good way,” Hosford says. With LAUSD, along with 15 of the biggest school districts in the country, all announcing computer science as a mandatory curriculum for K-12, the free 10-lesson Foos curriculum includes printable unplugged activities that allows the game to fit well into a formal classroom environment — either as a unit, or as a reward.
“For one thing, the kids really love it,” he says. “Teachers know if kids really love it, to use it as a reward. We have definitely heard that story.”
The Foos — “Foo” is a placeholder term that programmers use when writing software with variables, and a term that Hosford says is just fun to say in such puns as Fooniverse and Fooville — isn’t done growing yet. Plans are in place for users to create storytelling games and games where they can explore a scene, essentially exploratory templates for the creation of universes. And all the games come packaged with a unique code so kids can share their specific creations with parents and friends.
Hosford said The Foos started with his daughters and his kids have remained heavily involved, and only half-jokingly referred to them as the company’s Chief Testing Officers. “There is nothing in the game they haven’t tested first,” he says. “We test with hundreds of kids, but it all starts with them. They are very different, the two of them, so when both of them like something we know we are on the right track.”
Hosford says he continues to learn from his daughters and other kids. “We learn what’s fun and not fun,” he says. But they also learn just how creative kids can be.
“Every time we create something that has more than one possible use, they surprise us with an unexpected way to use it,” he says. “The power of our game editor is you can drag and drop into the game and reprogram any of those objects. They come pre-programmed, but you can go in and change it. The things they do with that power is awesome and we never anticipate what they are going to do. We just need to create powerful tools and leave it open-ended and let their imaginations run wild.”
Submit a Letter to the Editor
March 1, 2016