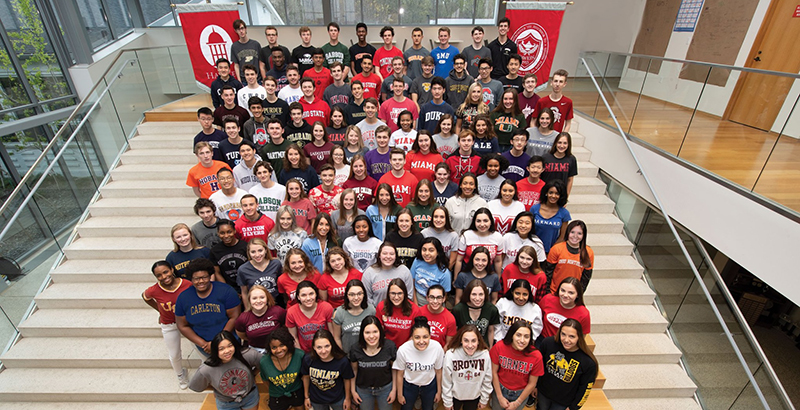 The Hawken School Class of 2019. The private school in Cleveland, Ohio, was the birthplace of the Mastery Transcript Consortium, which reimagines the high school transcript without letter grades or GPAs. The Cleveland Metropolitan School District is now considering an expansion of its mastery schools initiative for the 2020-21 school year. (Facebook)

A bold proposal in Cleveland could set the tone for how schools around the country could restart in the fall, one that takes into account students’ vastly different access to resources and remote learning during the pandemic and lets students learn at their own speed.

Cleveland schools would toss aside teaching many students in traditional grade levels this fall and dramatically expand the “mastery” learning plan it has tested for a few years.

The Mastery Transcript Consortium Has Been Developing a Gradeless Transcript for College Admissions. This Fall It Gets Its First Test

Out would go the usual practice of students advancing a grade each year, an especially tricky issue to manage this year after schools shut down nationwide in March — to be replaced with a system of “grade bands” that combine students of a few ages and grade levels into the same classroom, school district CEO Eric Gordon told the school board Tuesday night.

“We’ve got opportunities here to really test, challenge and maybe abandon some of these time-bound structures of education that have never really conformed to what we know about good child development,” Gordon said.

Educators nationally are worried about the early school closures and how the chaotic shift to home learning will affect students, especially those from poor families. Most expect a “COVID slide” that magnifies the typical “summer slide” as student skills regress over summer vacation.

Many are debating extending the school year to have classes in person before break or returning early for “jump start” review sessions. Others look at intense online summer school.

In Cleveland, schools that use the system often keep K-8 students in the same grade band for a few years, instead of moving up a grade every year. Students then relearn and reinforce skills they need to succeed before advancing when individuals are ready to move on, sometimes mid-year.

At high schools, students in mastery schools can keep re-learning specific skills and receiving extra help until they know them well. As students learn, schools often avoid giving traditional A-F grades and rate students as “incomplete” or “developing” until they rate as proficient.

Gordon told the school board that by avoiding the normal grade levels, the district can help students catch up, learn what they need and not stigmatize students as failures by making some repeat grades.

He also said that his draft school reopening plan coming mid-June will offer the mastery system as an option for the community and individual families to consider, along with a few other choices described below.

As chair of the Council of the Great City Schools, the national association of big-city school districts, Gordon said other urban school superintendents around the country have told him they are using or are considering using mastery approaches. Some schools in New York City and some states are using the model, but more may take it up, he added.

For urban districts like Cleveland, which has the second-highest socioeconomic challenges of any big city in the country, according to Stanford researchers, students falling further behind is a real concern. The same researchers estimated that Cleveland students were two years’ worth of learning behind the national average, even before poor internet access put students at an even greater disadvantage when schools closed.

In his preview of the reopening plan to the board, Gordon suggested a few strategies for learning while keeping kids at safe distance. He said he will likely offer families a few choices for returning to school so they can pick what works for them.

“You’re going to see a menu that people can move through to adjust and meet their needs,” he said.

Among the possible strategies:

He also said he wants focus groups of students to review the draft plan and help craft the final version.

The district is polling parents and teachers about what has worked with the district’s emergency remote learning plan so far and what they want to see in the fall.

And the district’s plan is also subject to guidance from state health officials and the Ohio Department of Education, though Gordon has been part of discussions to set the state plan. Early drafts of the state plan also give districts wide flexibility to set their own approaches.

Gordon’s preview of Cleveland’s plan Tuesday centered on “mastery” or “competency” systems, coaxed by school board questions. It previously failed at two ninth-grade academies in Cleveland a few years ago, but it is an integral part of MC2 STEM High School, one of the district’s more popular choice high schools.

It is also at the core of the successful Intergenerational Schools charter chain in the city and the new private Mastery School of Hawken.

The shift would take cooperation from the Cleveland Teachers Union, which is already familiar with the approach. It would take buy-in from parents, who won’t see their children promoted each year. That has sometimes been a source of conflict at the Intergenerational School when parents do not fully understand the model.

It also will need law changes from the state, which tests students annually based on their grade level and which gives districts lower grades on state report cards if students don’t graduate in four years. Gordon said the state focuses too much on days or hours of classes, not on whether students have learned material.

“We really see an opportunity that means an entirely new policy context at the state and national level that allows us the nimbleness to behave differently,” he said.

Correction: An earlier version of this article reported that CEO Gordon had proposed ending the practice of moving students up a grade every year, instead keeping them in the same band for a few years to relearn and reinforce skills before advancing. Gordon talked about using grade bands but did not specifically say how they would be carried out, though typically schools using mastery plans will keep students in grade bands for multiple years.