Civics Education IRL: One Day on the Campaign Trail With a Couple of Maryland High School Volunteers 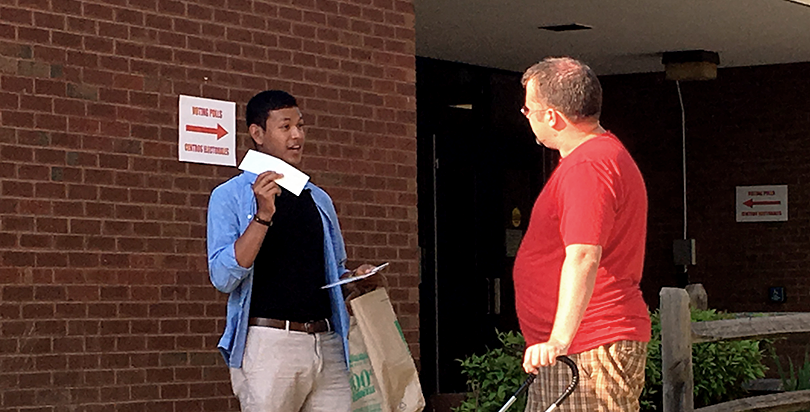 Anthony Ipina, left, talks with voters at Fields Elementary School about Maryland Gov. Larry Hogan. Hogan, a Republican, is not up for re-election until 2018, but it’s important to build support early, Ipina says.Photo: Carolyn Phenicie

(Montgomery County, Maryland) — Teenagers, particularly those of the Millennial generation, often get a bad rap for being uninformed about the world beyond their high school walls — or their cell phone screens — and lazy about trying to change things.
Hard numbers aren’t available, but at least some teenagers, motivated by their own futures, commitment to particular candidates or causes, or perhaps just an innate love of politics, are volunteering as part of the 2016 presidential election.
The 74 spent the day with two of that species who volunteered during the April 26 primaries in Maryland: Celia Hoffman, 16, who went door-to-door for Hillary Clinton, and Anthony Ipina, also 16, who campaigned for Republicans farther down the ballot.
Hoffman’s support for Clinton dates back to 2007 when, yes, she was 8 years old.
“I found out that there had never been a female president and I was outraged,” she said. “My entire life, my parents had told me that I could do anything that I wanted to do, and nothing was going to stop me, least of all my gender.”
She dressed up as Clinton that year for Halloween, tiny pantsuit and all. She was devastated to find out her parents supported Barack Obama in that primary, though she’s now come to be “a big fan” of the president. 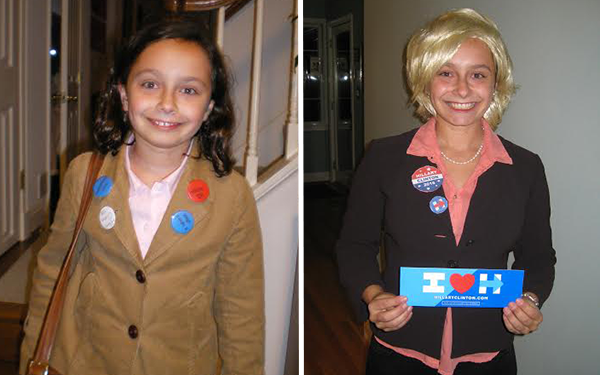 Celia Hoffman, then 8, dresses as Hillary Clinton ahead of the 2008 election. It was the best way to show her support as a young child, she said. Hoffman would later volunteer for Clinton’s 2016 campaign at 16 and dress as the politician again.
Photo Courtesy Celia Hoffman
Hoffman, a junior at Walt Whitman High School in Bethesda, has followed Clinton’s career in the years since and remains strongly in her camp. She signed up to the campaign’s email list the day Clinton announced, and has been volunteering regularly since January.
She estimates she’s spent about 20 hours trying to get the former secretary of state elected, mostly phone banking with a group called DC for Hillary. She also devoted the Sunday afternoon before primary day to knocking on doors.
Ipina’s political activism also draws from personal experience, but of a different sort.
His interest began a few years ago. His parents, who emigrated from Guatemala as teenagers, own a small hair salon that has been slammed by ever-rising taxes. They had to rent out the basement of their home and couldn’t help his older sister pay for college, says Ipina, a junior at Gaithersburg High School.
This isn’t his first election rodeo — he’s proud that he helped to campaign for Gov. Larry Hogan, only the second Republican elected as governor in the deep-blue state since the 1960s, and for local candidates for Montgomery county executive and U.S. Congress, though they were less successful.
He prefers to work on state and local elections, because he can be more involved, and feels like he has a bigger impact
“A lot of people my age, the way they get themselves involved is through social media,” he says, clearly disapproving of his peers’ apathy.
This primary day, he has literature for several Maryland Republicans but mainly focuses on two: Kathy Szeliga, a candidate for the U.S. Senate seat left open when Democratic stalwart and the longest-serving woman in congressional history, Barbara Mikulski, decided to retire, and Gwendolyn Kimbrough, who was running for a seat on the Montgomery County Board of Education.
Morning in Bethesda
Hoffman’s day starts in a non-descript office building in Bethesda, a wealthy suburb of Washington, D.C. The small room is decked with a rainbow gay-pride flag signed by Minnesota Sen. Amy Klobuchar and Labor Secretary Thomas Perez, and dozens of homemade signs
Retired Gen. John Douglass, who served as assistant secretary of the Navy under Bill Clinton, rallies the volunteers, mostly a mixture of middle-aged women and students from George Washington University in D.C.
He tears up discussing the importance of the election, saying he’s proud of all the volunteers. “This is much more important for you than old guys like me,” he tells the college students.
After a brief primer from a campaign staffer — don’t put campaign literature in mailboxes (it’s illegal), don’t try to turn Bernie Sanders supporters, don’t try to get past a giant fence or scary dog — Hoffman is off. An adult volunteer ferries Hoffman and a high school classmate to a wealthy neighborhood just north of downtown Bethesda, where houses routinely run north of $1 million.
Hoffman is out for over two hours in the heat, which is pushing 80 and sticky-humid in the way D.C. summers are. She trudges through some rain, not driving but hard enough to be annoying. It’s an hour before she knocks on a door where someone is actually home. 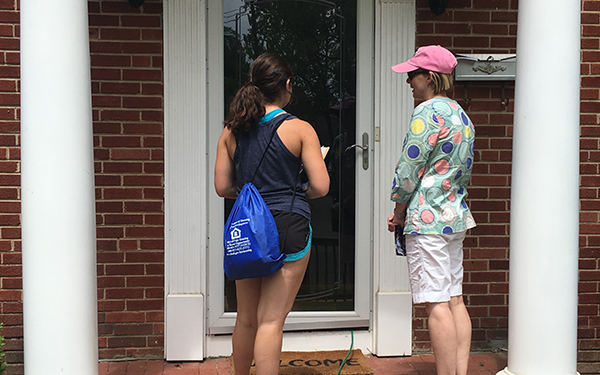 Celia Hoffman, 16, and another volunteer for Hillary Clinton knock on doors in Bethesda, Md. ahead of the state’s April 26 primary.
Photo: Carolyn Phenicie
The first voter Hoffman finds has already voted for Clinton, but far from enthusiastically. Clinton wouldn’t be her first choice, the voter says, but she’ll take what she can get.
Hoffman, wearing sneakers and a tank top covered in Clinton’s logo, a combination of the letter H and an arrow, is undeterred. She and her team will go on to knock on about three dozen doors, speaking with perhaps a dozen people and leaving a postcard for those who aren’t home at the rest.
After several hours on the streets, she returns to campaign headquarters to make phone calls before she has to leave for crew team practice.
She thinks the day went pretty well, though the weeks of work leading up to primary day were probably more helpful, she says.
She wishes more students from her high school, consistently ranked as the best in the state and among the top in the country, and the club she started there, Whitman Students for Hillary, turned out to volunteer, but understands why they didn’t.
“If people have a day off from school they probably don’t want to be traipsing around in the hot sweaty environment trying to convince people to vote, especially if they don’t have a vote themselves,” she says. She suspects many were using their day off to study for Advanced Placement exams, which start the week after the primary.
Hoffman’s work paid off: Clinton bested Sanders by nearly 36 points in Montgomery County, higher than her statewide margin of victory, and went on to win four of the five primaries that day. Clinton suffered a setback the next week, losing Indiana’s primary to Sanders, though she’s still expected to win the nomination.
Hoffman plans to continue campaigning for Democrats through the general election even if, somehow, Clinton isn’t the nominee. The Republicans, she says, “are incredibly scary.”
Afternoon in Gaithersburg
Later in the day, Ipina, who spent the earlier part of his day off school studying for the SATs, is targeting the after-work voters at Fields Elementary School.
Maryland’s primary is closed, so only registered Republicans can vote for most of the candidates he’s supporting. His goal, finding those Republicans in a county where they’re outnumbered three-to-one, approaches quixotic. He asks voter after voter, “Hello sir, are you voting Republican?,” “Hello ma’am, are you voting Republican?”
Most people either ignore him completely or give a short “nope” and keep walking. A few, though, aren’t so polite. One calls the idea “outrageous,” another laughs at him, a third tells him to “Do a little reading and you’ll switch sides.”
Some he just tries to get to support Kimbrough, whose seat on the county Board of Education is non-partisan. He doesn’t have much luck there, either.
Campaigning during the 2014 elections was easier, he says. He got to attend bigger events, where there was a wider swath of potential supporters, and it wasn’t brought down by the acrimony that has overtaken the 2016 contest. Ipina, who supports Ted Cruz but only because his first two preferred candidates (Dr. Ben Carson and Sen. Marco Rubio) dropped out, also thinks Donald Trump puts voters off Republicans generally.
Trump won all of Maryland’s 38 delegates that day. The next week he locked up the nomination following a big win in Indiana and Cruz’s exit from the race. 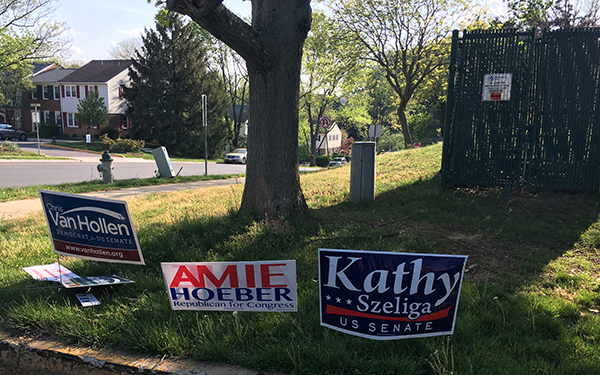 Campaign signs advertise candidates for Maryland congressional races outside Fields Elementary School in Gaithersburg, Md. Democrat Chris Van Hollen will face off against Republican Kathy Szeliga. Anthony Ipina campaigned for Szeliga in a county where Democrats outnumber Republicans three-to-one.
Photo: Carolyn Phenicie
Ipina is outside for at least half an hour before he finds a Republican voter, and over the course of about two hours, ferrets out perhaps five or six. Ipina does manage to convince one to support Szeliga, the Senate candidate, winning over the voter with Szeliga’s hardscrabble backstory of working a series of minimum-wage jobs, including putting up drywall and washing dishes.
His other assignment is to get voters of all stripes to back Hogan, the governor, who currently enjoys a sky-high 70 percent approval rating among Marylanders, by taking a bumper sticker.
Hogan isn’t up for re-election for two more years, but part of his success in his last election was gathering support early, Ipina explains. The bumper stickers are a way to kick off the 2018 campaign and start building momentum now.
Ipina’s candidates were one for two at the end of the day: Szeliga won the Republican primary for Senate and will face Rep. Chris Van Hollen, but Kimbrough wasn’t one of the top two vote-getters who will advance to the general in November.
No matter the voter or how rude they were to him on the way into the polls, Ipina thanks every single one for voting. Most people seem quite surprised by his gratitude, particularly those who were surly on their way in.
The thanking was his own idea, he says, because voting for anyone is better than being ignorant to the issues and races. “It’s important to be involved in your own politics.”
Submit a Letter to the Editor
May 9, 2016