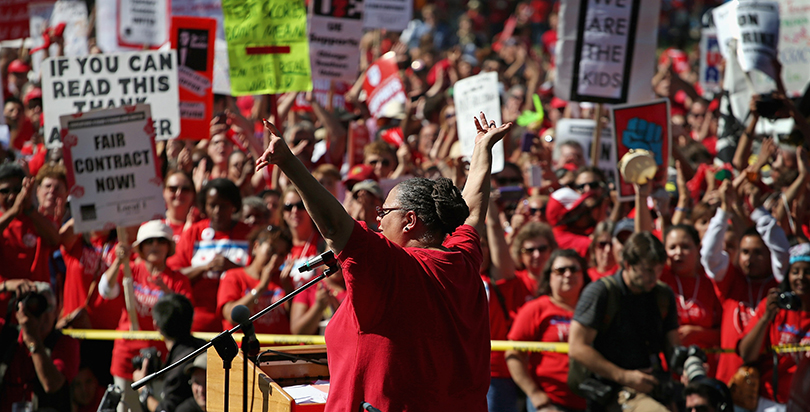 Monday night’s tentative deal between Chicago Public Schools and the Chicago Teachers Union that headed off a strike included one surprising provision among the usual issues of pay, pension contributions and classroom conditions: a limit on charter school growth in America’s third-largest city.
Under the agreement, which must be ratified by the union, the district capped the number of charter schools and limited the total number of students who can enroll.
Illinois Network of Charter Schools President Andrew Broy was quick to criticize that part of the agreement.
“Given this deal, Chicago now has the dubious distinction of being the only American city with a self-imposed cap on the number of charter public schools,” Broy said in a statement Tuesday. “For a city with such a proud record of achievement that has led the country nationally on high-quality charter growth as recently as five years ago, this is an embarrassment.”

But Chicago Teachers Union vice president Jesse Sharkey contends that the cap allows the city to address the negative consequences of charter growth on district schools. As charters have expanded, he contends that traditional public schools have been drained of resources and students.

“What in the world has been democratic about the growth of charter schools in the  Chicago community? It’s not like we have an elected school board that pursued this policy. It’s not like the charters have elected bodies that decide where they are going to grow and where they are going to expand,” he said Tuesday afternoon. “The truth of the matter is public school advocates have been demanding a seat at the table on this question for 20 years, since charters began their sort of runaway expansion.”

Both the district and the union were under intense pressure to come to an agreement Monday night, the deadline the union had set for picketing to begin if no contract was in place.
The CTU, which has about 27,000 members, has been without a contract since June 30, 2015. In February, the union’s 40-member “Big Bargaining Team” unanimously voted to reject an offer from the city that included small raises, greater teacher contributions to pensions and health care and a promise to curtail charter school growth. Afterward, the union highlighted some $200 million worth of additional services that the district should pay to support students.
Late Monday, the city sent a new offer, agreeing to add a staffer to large classes in kindergarten through second grade, keep laid-off teachers on the payroll for 10 months and continue paying the majority of teachers’ pension contributions. Newly hired teachers will have to pay the full 9 percent contribution; current teachers pay only 2 percent, with the rest funded by the district.
But it was the charter cap that caught insiders’ attention.
The cap “is a real a breakthrough item in the collective bargaining process,” said Bob Bruno, a professor of labor and employment relations at the University of Illinois at Urbana-Champaign. Such contracts, he said, “have the weight of the law. You can litigate against violations of them. You can absolutely bet that this teachers union” will use it.
Chicago has 129 charter campuses that educate some 58,000 students, and the district is reviewing requests to open more schools. But under the contract, no new charter schools could open unless some closed.
“There will be a net zero increase in the number of board-authorized charter schools over the term of this agreement, and the total number of students enrolled by the end of school year 2018–2019 will not exceed 101% of the total student enrollment capacity as of school year 2015–2016,” the provision says.
Charter applicants who have been denied or ordered to close can appeal to the Illinois State Charter School Commission. Earlier this year, the commission’s board unanimously overturned Chicago Public Schools’ decision to close three schools, prompting criticism from the school district.
For this reason, the union has argued that the side agreement in the tentative contract has no teeth. But charters argue they shouldn’t have to go through an appeals process, and a bill that passed the House and was sent to the state senate would abolish the commission’s veto power over denied charter school applications.
Sharkey said the union was “confident” that a version of the bill would pass in the state senate in a future legislative session.
“We see it as a very real threat,” Constance Brewer, chief external affairs officer for the Noble Network of Charter Schools, said last week.
That “threat” has prompted unprecedented mobilization of the local charter community. Parents and school leaders from the Chicago International Charter Schools, KIPP, UNO Charter School Network and Noble marched around City Hall and Chicago Public Schools’ headquarters last Thursday, demanding that the district leave the charter cap out of its negotiations with the union.
“Save our charter schools. Save our charter schools,” they chanted. “Save our charter schools.”
Brewer said the the protest was only the beginning of charter schools’ activism.
“I think we are just at a tipping point,” she said.
Submit a Letter to the Editor
October 11, 2016