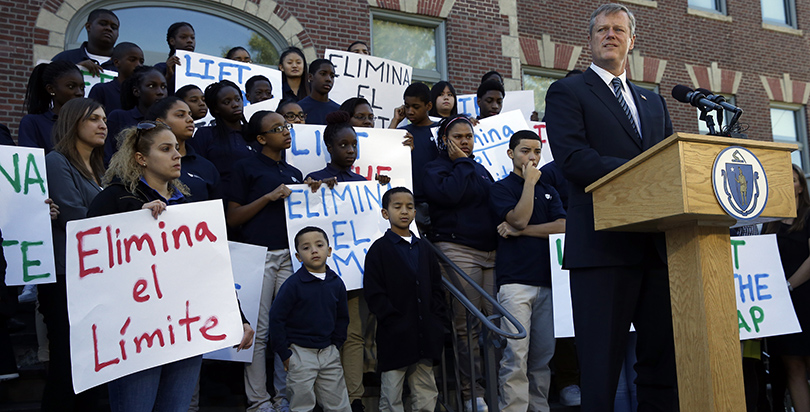 Just two weeks before Massachusetts voters will decide whether to lift the state’s charter cap, Gov. Charlie Baker put a rosy spin on chances that new charters will be opened next year and networks hoping to expand will soon be able to enroll students on their waiting lists.

In a speech Tuesday sponsored by the Manhattan Institute in New York City, Baker said he supported lifting the cap because it gives city students who have traditionally lagged behind their peers in the suburbs more school options.

If children “don’t have access to a great education, we are putting them behind the eight ball and building a hill for them to climb that is extraordinarily steep,” he said.

“We have 20 years of experience with charter schools that has been proven to be a success.”

Recent polls suggest that voters will vote no on Question 2, a ballot referendum that would allow the state to authorize a total of 12 new charters or charter expansions annually.

Baker said he thinks the campaign is too close to call.

“The back and forth on this one is pretty even. I would say at this point the contest is within the margin of error,” he said.

“This question will be by far the most visible and public discussion we’ll have in Massachusetts heading up until this election.”

Baker’s speech, at the Harvard Club in midtown Manhattan, attracted a handful of anti-charter-expansion protesters.

The first-term Republican argued that Massachusetts’s scores on the National Assessment of Educational Progress rose from the middle of the pack to first among all 50 states after education leaders raised its curriculum standards in the 1990s.

“Generally speaking, the launch of that bargain worked pretty much how people hoped it would,” he said. “It also included in there this little idea that maybe we should establish some charter schools.”

Charter schools in Massachusetts’s cities have in some cases outperformed the traditional public schools in wealthy suburbs, in part because they have longer school days and school years, Baker said.

“In fact, after 20 years it is literally the only intervention that has demonstrated an ability to close the achievement gap between white students and African Americans,” Baker said. “Education reform has achieved the vast majority of the objectives it set out to achieve.”

Asked whether there was a “principled” reason not to support lifting the cap, Baker said he disagreed with the argument of teachers unions and many advocates that charters drain money from traditional public schools.

Although several Boston studies have shown that charters and districts spend at comparable rates per student, some researchers also conclude that charter expansion will likely require districts to cut costs — for instance, by laying off staff or closing schools — in order to offset revenues lost when students move to charter schools.

While the statewide cap on charters of 120 hasn’t been reached, there is also a funding cap: Districts can spend no more than 9 percent of their budget on charters unless the district is among the lowest-performing 10 percent of districts in the state; those low performers can spend up to 18 percent. That ceiling limits further growth in Boston, whose charter schools have been described by some researchers as the most effective in the nation.

If voters say yes to the Nov. 8 ballot question, the Department of Elementary and Secondary Education would be able to green-light the 12 new or expanded schools outside of the funding cap.

The question’s supporters and opponents have each spent millions on advertising, funded by charter-friendly groups such as Families for Excellent Schools and, on the other side, the two major national teachers unions.

All told, PACs in favor of expanding charters have spent at least $17.5 million, while the union-funded Save Our Public Schools PAC, which is against lifting the cap, has spent $9.3 million, according to recent filings with the Massachusetts Office of Campaign and Political Finance.

The “No on 2” campaign, which centers on the argument that charters drain traditional public schools of hundreds of millions of dollars each year, has appeared to resonate in Boston’s affluent suburbs. On Tuesday, the group criticized Baker for appearing before the Manhattan Institute and in a recent television ad campaign touting the benefits of charters for needy children.

“While Governor Baker is in New York asking for more Wall Street money from the billionaires funding Question 2, he’s showing up here in a TV ad that repeats the ludicrous idea that Question 2 won’t affect any family who likes their school,” the No on Question 2 campaign said in a statement to WWLP-22 News.

“There are hundreds of thousands of families who love their local public schools in every community in Massachusetts, and Question 2, by removing all limits on charter school expansion, will lead to even deeper budget cuts in urban, suburban and rural school districts.”

Prominent Democrats such as U.S. Senator Elizabeth Warren and Boston Mayor Martin Walsh have come out against the proposal; U.S. Rep. Stephen Lynch supports it.

(More on Massachusetts: Boston Parents Ask Why Wealthy Neighbors Are Opposed to Their Charter Schools)

An April poll by the Western New England University Polling Institute found 51 percent of voters said they would support a proposal to lift the charter cap, while 26 percent were opposed.

“This question is about giving kids and families an opportunity if they live in underperforming school districts to have additional choices to serve their kids,” he said. “And to give them in many respects the same options, the same choices that everyone else in Massachusetts already enjoys.”