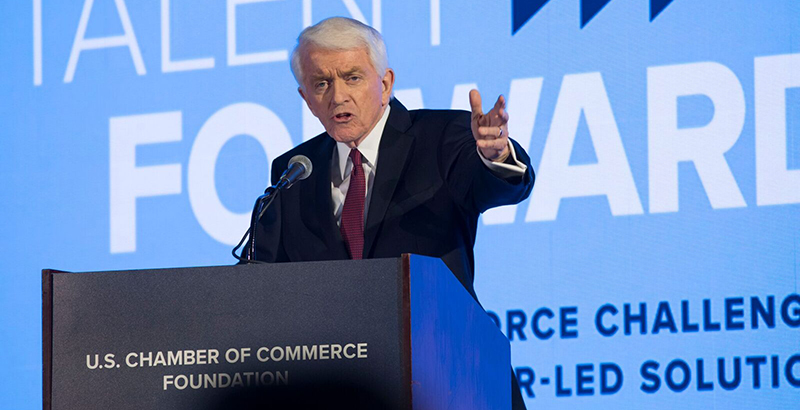 The much-discussed skills gap that separates trained workers and available jobs in America must be tackled throughout the education pipeline, starting as early as preschool, Chamber of Commerce President Thomas J. Donohue said Tuesday.

“The foundation for skills development is in the first five years of life, before most children ever meet any type of out-of-house teacher. So the skills gap is not just a college issue or a classroom issue — it’s also a childcare issue,” Donohue said at a daylong Chamber conference in Washington focused on workforce issues.

The Chamber has focused for the past 18 months on raising awareness of the importance of early childhood education, and the reception in the dozen states where the group has worked has been “extraordinary,” he said.

In K-12, rigorous standards, school choice, and tough accountability are necessary, he said, to get to the point where high school graduates are prepared for higher education or a good job.

Beyond the skills gap, the country is also facing a people gap: an inability to find workers where and when employers need them.

“The United States is fundamentally out of people,” he said. More people, either those “who are on the sidelines” or those who come from are overseas, will be necessary to fill those gaps, he added.

Donohue said he’s optimistic that comprehensive immigration reform can be completed in the next few years. Though the Trump administration has been hostile to immigration, both legal and illegal, Donohue said he thinks Trump’s desire for a wall on the southern border will encourage him to come to the negotiating table.

For those already in the country, government and businesses must work on the opioid crisis and prison reform and re-engaging young people sometimes called “opportunity youth,” those between the ages of 16 and 24 who aren’t in school or the workforce, he said.

Engaging those young people and providing novel job training is both a business and moral imperative for employers, industry representatives said at a later panel. 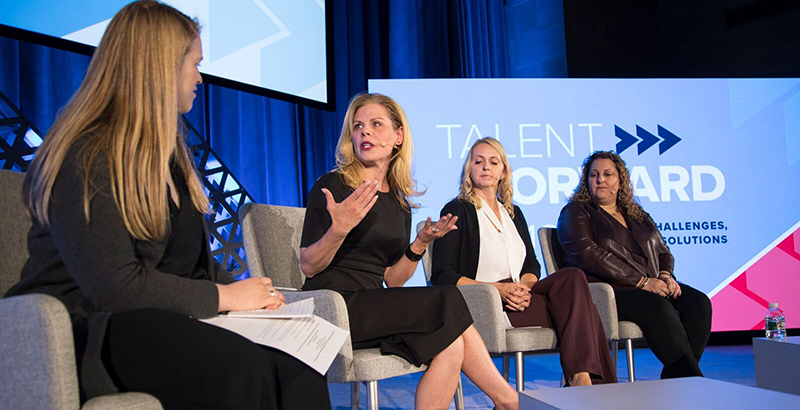 One of those representatives was from McDonald’s, which offers a variety of formal trainings to its employees, including English as a second language, high school equivalency, and college tuition support.

That helps keep good employees just a little longer in a job with high turnover and improves the overall job pipeline, given how many people get their first job at a McDonald’s, said Lisa Schumacher, director of education strategies at the company.

“If we know they’re going to leave anyway, it really helps our business and helps the next business, and helps to close the skills gap if we can give them … access to education that takes them on to the next thing,” she said.

Salesforce, a tech company, partners with the nonprofit job-training program YearUp to offer six-to-nine-month internships. That not only gives the company a new way to recruit in a tightening labor market but also helps meet that moral obligation to fill gaps left by the broader K-12 system, said Jennifer Stredler, vice president of workforce development for the company’s philanthropic arm.

“The K-12 system is not working for all of our young people,” she said. “Young adults — we can’t fail them. They need second chances. They need different ways to get into good jobs and to reach economic prosperity.”

Disclosure: Pearson, which has occasionally sponsored series at The 74, was a sponsor of the conference. The U.S. Chamber of Commerce has also sponsored coverage at The 74.