Case Study: An ‘Education Return on Investment’ in Funding Parent Empowerment (or When Spending $1 Drives $44 in Proficiency)

We spend $606 billion annually in K-12 education in America, with just 0.3 percent from private philanthropy. The vast majority of this education philanthropy rightly goes to funding the crucial, necessary “supply” of education innovations, such as public charter schools, district transformation efforts, innovative education programs, and talent pipelines for teachers and school leaders.

Despite such investments, high-performing education innovations in many school systems face daunting political and policy barriers that prevent widespread adoption. Fortunately, we are starting to see more examples of parents and community members exercising the power of their collective voice to influence those in authority to remove these barriers.

And these efforts can have a significant, quantifiable Education Return on Investment (Ed-ROI).

I am going to use a real but unnamed example to illustrate this point because it involves the polarizing issue of public dollars flowing from district schools to charter schools. I also want to acknowledge that I’m not an economist, a statistician, or an investment banker. I am somewhat “hacking” this analysis. It is meant to be provocative, not definitive.

One other caveat: It is important to acknowledge that this is ultimately about people, not numbers. Having the privilege to get analytically wonky should not distract from the fact that this is about students having the full opportunity to realize their best destinies, and their parents’ hopes and fears about that opportunity being granted or denied.

Here are the facts:

In business, “return on investment” is used to estimate the expected value or benefit created from investing scarce resources in some enterprise. The higher the ROI, the better, and it is expressed as a multiple of the initial investment (e.g., “10x” means getting $10 back in future return for every $1 invested). 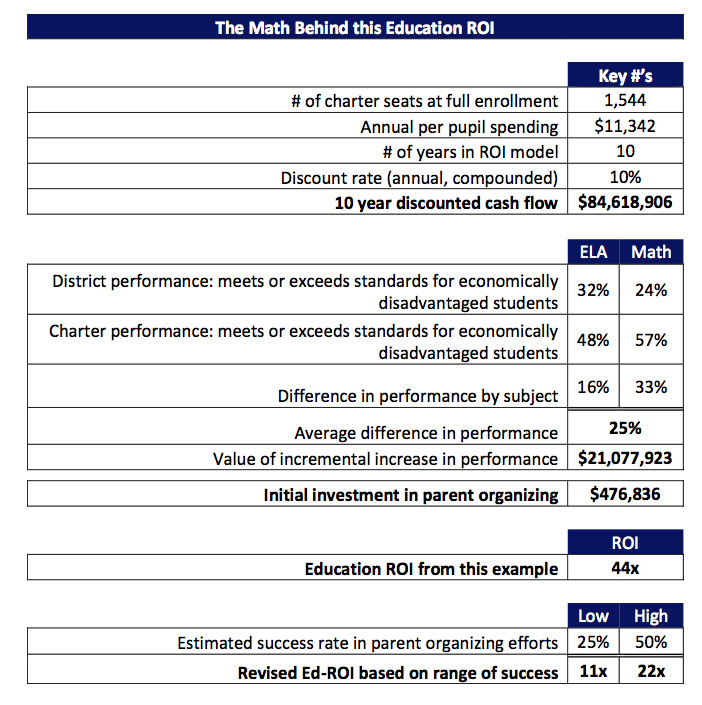 First, we calculate the amount of dollars going to these schools (in finance terms, the “cash flow”) based on public funding. To be conservative, we’ll limit our calculations to a 10-year time span. We’ll use a high annual discount rate of 10 percent, which represents the annual, compounded loss in the value of a dollar per year. In each of the 10 years, we can count only the number of students the charters serve that year (the schools don’t grow to full size until year six). Again, to be conservative, we can use the per-pupil amount of $11,300 multiplied by the number of students per year and assume no growth in public funding for 10 years.

Based on these assumptions, this successful parent action resulted in $84.6 million in redirected spending over 10 years, discounted to today’s dollars.

These charters opened in 2015, serving a student population that is 93 percent economically disadvantaged (compared with 57 percent for their host district).

In their first two years, they have on average increased proficiency rates by 25 percent for economically disadvantaged students relative to similar students in their host district. Their ultimate ambitions are much higher, but this is still a meaningful impact.

A classic ROI analysis is calculated not on spending but profit. However, in this case, the “profit” is the increase in educational proficiency.

When we divide this $21.1M in education profit by the initial investment of $476K in parent organizing, we get a very impressive 44x Ed-ROI. This means that every dollar invested in parent empowerment in this example resulted in 44 dollars of educational proficiency.

If we want to be even more conservative, let’s not assume every parent/community organizing action will win — or win in the time horizon of this example. Let’s assume these type of efforts only win 25 percent to 50 percent of the time. Even with this additional reduction, we still get an 11x–22x Ed-ROI.

And even this doesn’t tell the whole story.

This community built a movement of locally rooted and powerful parents who now know they can make a difference. These parents are stewarding the success of these schools (including holding them accountable) and will continue to push for broader change across the entire district. “We need these charters to succeed because we need the district to be pushed to fix all of its schools, and we’ll help them if they let us,” promised one of the parent leaders. “But if they can’t, we’ll fight for more charters.”

The value of that kind of investment is, to borrow from a popular credit card ad, priceless.

This methodology is, of course, not without its limitations.

First, it doesn’t include philanthropic startup capital for the charters. I would argue that this doesn’t matter. If you were a funder seeking to help these schools open, you would have been giving startup capital anyway. But in this district, you could never get to that point before first investing in strong parent empowerment to build the kind of community capital needed to allow these charter schools to open.

Next, in the U.S., every state and district has distinct political and policy contexts. This type of parent/community empowerment might not always be necessary. Nor would it always be sufficient. Some contexts may require that parents/communities exercise power not just with their voice but their votes.

Further, I’m interested in education ROI, not economic ROI. When you look at educational interventions based on economic ROI, the sheer magnitude of difference in lifetime earnings ($331,000 per student who graduated high school and an additional $964,000 per student who graduated college) can make almost any social intervention look good. And this is before you factor in social costs or public contributions such as an increase in taxes paid, decrease in public assistance, and impact on the criminal justice system.

And finally, this does not mean we should decrease funding on the supply side to education innovators — full stop! In communities where the supply of great educational innovations can grow, philanthropy should support this. However, there are many communities in which existing policies and politics might block interested philanthropists from supporting the opening of a new school or the transformation of a failing one.

Communities and educators need more parent leaders and parent-driven organizations to be the face and force of change to overcome these barriers. We need to support more efforts like the one in this example (including efforts supported directly by school operators) to see if the results — the Ed-ROI — can be replicated on a grand scale.

What do you think? How would you approach Ed-ROI? To participate in a discussion about Ed-ROI and the themes of this article, please join us on New Profit’s Facebook page.