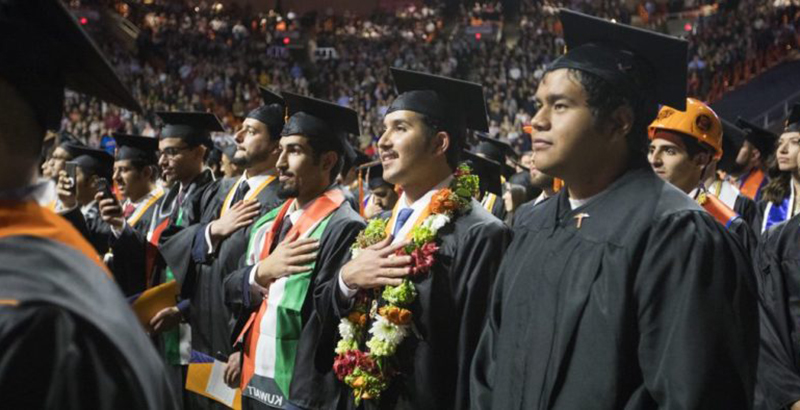 University of Texas at El Paso graduates celebrate at the 2018 winter commencement. (Photo courtesy of UTEP)

When Miguel Venegas graduated from UTEP in December 2020 with a degree in mechanical engineering, he knew he was entering a job market as the world was grappling with a world-wide pandemic. But he was hopeful.

With a revised resume and an updated Linkedin profile, Venegas started the process of applying to entry level jobs and assumed he would land a job three to four months after graduating.

Now five months after graduating he still hasn’t found a job and just recently has had interview call backs.

“It’s not easy, it’s a lot of trial and error,” Venegas said.

Career counseling services have long been a staple of colleges and universities, though a leading expert has called for an overhaul in their approach. The COVID-19 pandemic and accompanying economic disruptions have increased the challenges for recent graduates looking for jobs.

Venegas thought his degree in mechanical engineering would open doors to plenty of job possibilities.

“From December to mid-February I wasn’t getting any responses. I was just submitting applications and not getting any call backs,” he said.

During that time period Venegas was using the help of UTEP’s Career Center to revise his resume and cover letter. But with no call backs from potential employers, Venegas decided to switch his tactics and use an online service to have his resume constructed.

After paying $200 for his new resume, Venegas started receiving calls.

“The resume that I paid for, I sent it back to the career center to get reviewed and they said to change it back to the old format I had,” Venegas said.

Andy Chan, the vice president of innovation and career development at Wake Forest, gave a TedX talk in 2013 and said that “career services must die.”

“I don’t want the whole idea of career offices to die but rather the brand of what career services represented before,” Chan said in an interview with El Paso Matters.

Chan said career service offices have traditionally been “an office that is serving students to give them what they want.”

He said an expectation is created that “the school is supposed to have all this stuff for me and I step in and you hand it to me over a desk.”

That framing is outdated and incorrect, he says.

“We’re trying to help you become CEOs of your own lives and that’s different framing than what a services office is,” Chan said.

At UTEP, the Career Center said its purpose is to “expose UTEP students to options that best fit their individual career needs and aspirations.” The center’s website states that the office aims to help students find internships, employment, and develop career skills such as learning how to interview.

“They gave me basic pointers but nothing too out of the box,” Venegas said. “It’s mainly just making sure things look clean, bullet points, action words, stuff like that.”

Venegas said he feels that the center is more tailored in finding students internships than post-graduation employment. He said that was a challenge for him as a recent graduate.

Chan, who has developed Wake’s Forest career center into a national model, believes a big part of a career office’s success is having a commitment from university leadership.

“The president and their senior leaders have to say ‘we want to do this really well,’” Chan said.

With senior leadership committed to success, Chan said that resources and funding have to be evaluated next.

“It has so many positive benefits to the university that I think a lot of people can justify the investment,” Chan said. He said a student’s post-graduation success impacts a university’s brand and alumni engagement.

Chan said he recognizes the pandemic has overwhelmed students and created uncertainty.

“COVID has created uncertainty in everything so it’s very hard to plan,” Chan said.

He said employers’ hiring schedules have been thrown off by the pandemic, creating a “wild west mentality” for graduates and companies.

His advice: stay in motion.

What the future holds

Having graduated in December 2020, Venegas hopes to find a job before the class of 2021 graduates.

“The more time that passes the more of a gap it is on your resume,” Venegas said. “You would have to explain when you get to that interview.”

On Monday and Tuesday of each week, Venegas says he spends around six hours applying to jobs and aims to send 20 applications out a day. He feels employers are not for hiring entry level candidates.

He believes a lot of employers are currently rehiring those that they may have lost during the pandemic rather than hiring new candidates.

Chan says that he advises students to apply to at least 50 jobs.

“Students recognize that it’s not as bad as they think,” Chan said. “It’s a lot of work but you learn a lot and have choices.”

Venegas is looking to relocate outside of El Paso because he doesn’t find enough jobs locally.

“I guess our community is not able to get the jobs needed for those high-paying jobs,” Venegas said. He said he was disappointed that El Paso is known for having lower paying jobs.

Chan said he recognizes that some students may have to create their own plans of finding employment instead of working with their school’s career service center.

He suggested that students look to peers, mentors, and faculty who may be going or went through the job hunting process themself.

“The world is about to blossom again,” Chan said.