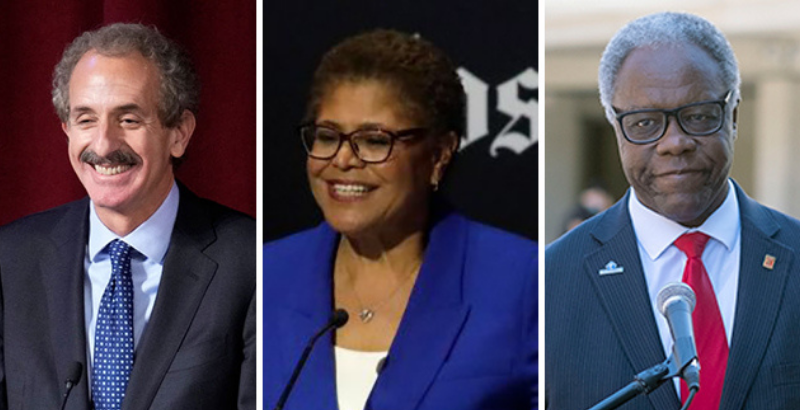 Despite the mayor not having direct control over LA Unified, three of the five candidates running for mayor, Mike Feuer, Karen Bass and Mel Wilson said they would partner with the school district.

A poll released last month by Great Public Schools Now, a nonprofit focused on education equity, found 85% of voters believe that the mayor is responsible for the quality of education provided to LAUSD students. More than 75%  believe the mayor should be held accountable for ensuring all children in Los Angeles can go to a good school.

“This is a critical moment for education in Los Angeles… The pandemic shone a light on the vast needs of students – including academic, economic, mental and emotional,” said Elmer Roldan, Executive Director of Communities in Schools Los Angeles, one of 10  organizations that sponsored the mayoral education forum which attracted an audience of 100.

“We have a unique opportunity for the new mayor of Los Angeles to play their part in helping us achieve a more equitable education system for Angelenos,” Roldan added.

“As the mayor and a leader of L.A. city, you should ensure that the youth feel protected in this community… the security around the schools should be a priority for the mayor,” Alonso said. “It interrupts the confidence of schools…and it makes the families choose different school districts around.”

“Kids bring weapons to school often just to defend themselves on the way to and from school,” Feuer said. “They won’t have those weapons on campus if they don’t need them coming to and from campus.”

Wilson, also emphasizing public safety, said he would hire more police officers and implement a plan to hold cops accountable if he wins the mayoral race.

“I believe in the public-school system. I believe in the L.A. Unified School District, and I believe it needs help now,” Wilson said. “And I know as mayor, I can be a collaborative partner with [LAUSD]…We make our city safe, we also make our parks safe, and we make our schools safe.”

Feuer, an LAUSD parent, noted LA Unified doesn’t have enough school counselors. “The national standard is one counselor for 250 students. In L.A., it’s one counselor for 1000 students,” Feuer said. “[This is] not good enough when half of the students at LAUSD come to school traumatized.

Bass said as mayor she would not only increase the number of counselors but also work on teaching young people how to best support other  students.

“[I] really want to look at bringing additional resources in for mental health,” Bass said. “I’m a big proponent of peer support and so obviously in the higher grades in middle school and in high school, training young people so that they can identify when their peers have problems. I would love to say that there will be 10 counselors in each school, but we know that that’s not exactly realistic.”

Bass also talked about the effect that major issues like homelessness have on students and her plan on preventing crime.

“We do know what works. We do know how to keep kids from getting involved in crime,” she said. “I do believe that one of the greatest issues in our city is profound income inequality…The only way to address income inequality is better and higher-paying jobs.”

A recent poll by the UC Berkeley Institute of Governmental Studies and the Los Angeles Times shows Bass as the second leading candidate behind Rick Caruso in the mayoral race. The primary election is on June 7. A runoff is expected  between Caruso and Bass in the general election on November 8.

Destiny Torres is a graduate student at the USC Annenberg School for Communication and Journalism pursuing a master of science degree in journalism. She earned her bachelor’s degree at CSU Dominguez Hills. She is passionate about culture and social justice issues.

Destiny Torres is a graduate student at the USC Annenberg School for Communication and Journalism pursuing a master of science degree in journalism. She earned her bachelor’s degree at CSU Dominguez Hills. She is passionate about culture and social justice issues.