Newark, N.J.
It’s the start of a September school day and Chris Cerf is busy roaming the halls of Mount Vernon School in Newark’s West Ward. He’s welcomed by a handful of elementary school students who perform a practiced dance in colorful garments representing the diverse countries — from Russia to Nigeria — where they are from.
He pops into a pre-K class where a teacher is quizzing students on the differences between words that begin with the letter M and the letter S.
Then he gets to a room, where a handful of parents are learning about the contentious Common Core standards and PARCC, the state’s new computerized standardized test. He applauds them for getting involved in their child’s education and offers some advice.
“The top thing on my list is making sure your children read every day,” he tells them. “The more that happens, the more they blossom.” Cerf turns to his left and asks for input from Newark Mayor Ras Baraka’s chief education officer Lauren Wells, who further extols the value of reading.
That the two education leaders are together, touring this school — or any school in Newark for that matter — is something of a turning point. While the visit is one of dozens Cerf made to schools during his first weeks as Newark’s new superintendent, he and Baraka have represented two warring factions who have fought bitterly over the direction of the school system and who will get to guide it.
The conflict took on a new tenor this year when New Jersey Gov. Chris Christie named Cerf to replace his former state-appointed superintendent Cami Anderson, who resigned in June after ugly, unrelenting confrontations with City Hall and some community members over efforts to reform Newark’s long-struggling public schools.
The governor also agreed to ramp up the process of returning control of the 35,000-student school district to the city’s elected school officials, who have not had power over the local schools in two decades and have clamored mightily to get it back
Cerf is far from a fresh face, however. He was Christie’s state education commissioner and Anderson’s boss during the controversial era of Facebook CEO Mark Zuckerberg’s $100 million gift to Newark schools recently depicted in veteran reporter Dale Russakoff’s book “The Prize.”
Now, Cerf, a  60-year-old Montclair resident who worked as an associate counsel under President Bill Clinton in his early policy days, is tasked with not only shepherding the district’s return to local control but also making sure the sometimes-hated reforms begun by Anderson don’t die on the vine.
With some of the political divisiveness cooled and relationship-building skills that set him apart from Anderson, Cerf just might be able to bring education reform in for a smoother landing and sidestep some of the political turbulence that has marked the last four years.
The mayor is willing to concede changes in style if not substance.
“I didn’t really have a relationship with Cami. The only difference I really see is that right now at least he’s willing to deal with critics. We disagree on almost everything. When we talk, we disagree,” Baraka said in a recent interview. “The only difference is he’s willing to sit there while I disagree with him.” 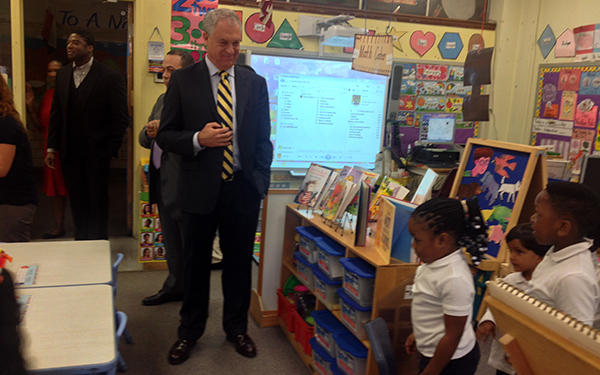 How can you say you want all children to be successful when you knowingly will expand at the demise of some of them without even a pause!

Cerf doesn’t think there should be a moratorium on charter schools but believes that traditional public schools will continue to educate the lion’s share of city students.
The meeting was a defeat for Cerf but he is trying to take the longer view while knowing the clock is ticking. Christie’s term ends in 2017 and it’s not likely he will stay on beyond that.
“I am really optimistic and confident, but I also have bad days. Sometimes the voices of unreason dominate,” Cerf said. “It’s a tough gig. It’s a very tough gig.”
But anyone who has watched Newark politics closely knows the school board meeting could have been much more combative. Cerf did not prevail but he wasn’t eviscerated, either.
In February 2014, Anderson announced she would no longer attend public board meetings because they were not productive. The month prior, she and her staff walked out of a public meeting where hundreds of Newarkers protested a plan for school closures and teacher layoffs. Anderson did not attend another public meeting. Once Baraka was elected, relations between City Hall and the school district got so bad the two entities could not even coordinate a unified response to a suspected meningitis outbreak.
Last month, on the first day of school, Cerf held a press conference at the Barringer Academies, two high schools that made headlines last year because so many students started with mixed-up schedules and substitute teachers. Newark City Council President Mildred Crump stood next to him, as he announced that the district was prepared to serve students at Barringer and all city schools.
“The last superintendent disengaged with the community and refused to attend meetings,” Crump, a vocal critic of Anderson, said afterwards.
In addition to meeting with Newark constituents, Cerf must deal with a range of practical issues. The district had a $60 million budget deficit earlier this year which has been whittled down to $15 million. How it will eliminate the remaining shortfall is unclear. The contract with the union representing the district’s 64 principals has also expired.
Cerf faces an uphill battle if he wants to go beyond a political honeymoon and truly win the hearts and minds of Newark residents. He runs up against a perception that he is part of an administration that steamrolls the community’s wishes in top-down style to accomplish a reform strategy. He remains a white outsider with ties to some of the wealthy private industry interests that anti-reformers disdain.
Newark Public Schools Advisory board member Antoinette Baskerville-Richardson said she has her doubts that Cerf will be able provide the transparency and policy course correction necessary to rebuild the community’s trust. “Smiling” at public appearances will not be enough, she said.
“It’s quiet now,” she said. “Sometimes the quiet is the quiet before the storm.”
In Russakoff’s “The Prize,” Cerf appears to give the impression at times that bypassing local politics was a necessary evil to getting reform done.
“I wish I had fully appreciated the need for deeper and greater engagement,” he acknowledges while also arguing that Russakoff’s telling did not fully hold accountable the powerful forces that aligned to protect a failed bureaucracy.
“I wish that the people who rolled this out had laid the groundwork in the community more deeply than announcing (the $100 million) on Oprah.”
Being there on the ground, in the schools, listening was evident in Cerf’s recent tour of Mount Vernon School. He asked the school’s principal, Bertha Dyer, how the central office could better support her efforts. They talked about the possibility of English language classes for parents and installing a science lab.
Cerf then applauded her for the school’s academic success — a bright spot whose students  perform better on state tests than their peers in other New Jersey districts.
The question is “How do we make it go viral,” he said.